Hello, readers and welcome to a new edition of the Daily Stock Watch! We've strayed away from talking about cards that have been gaining ground financially as casual favorites over the past weeks so it's time to go back to that side of the fence. The card that I will talk about today is one that has reached its all-time high of $6.92, even though it's not being used in any competitive decks in Magic. We love to check out cards of this kind every now and then, so we could make some profit out of it while we can. 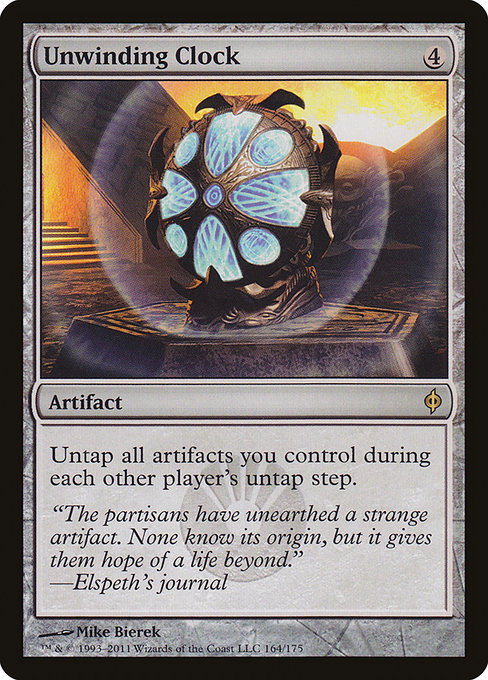 A lot of cards from New Phyrexia are already gaining steam financially, as it has been seven years since it was released. Unwinding Clock is one of those cards that actually look good when you see it, generally because of the powerful Seedborn Muse effect that is brings to the table for artifacts, but hasn't really been broken as a combo piece, thanks largely to the strength of artifact-themed decks such as Affinity and Lantern Control which doesn't need its power to stay relevant. As a matter of fact, it's hard to find a deck that's relatively dependent on this card, but we could definitely check a Commander list that would be able to benefit from its presence.

I've been looking for some neat ideas on where you could slot it in, but all I ever found that was a bit interesting was a deck that looked like this:

It's a casual deck that tries to take advantage of weenie creatures and Grand Architect, and the powerful trio of Crown of Empires, Throne of Empires and Scepter of Empires. It's a bit dreamy if you ask me, and it seems to me that Unwinding Clock keeping this price tag is also in that accord. I just don't think that it will ever be used as a centerpiece of a combo deck, despite of the promise that it holds as a card that could keep your board always ready at all times. If we follow the trend of how cards like this has progressed in the past few months (take note of Dolmen Gate as an example) then we could expect it increase for a few more bucks before it settles down at a price where it would stay for a while. I'm just not the type of guy who would keep this in my bin and wait for it to gain more ground financially. I'd like to get out of this investment as much as possible.

At the moment, you could get copies of Unwinding Clock from online stores such as StarCityGames, Card Kingdom, TCGPlayer and ChannelFireball for anywhere between $5.86 up to $7.99. Foil copies of this card can be obtained from anywhere north of $15, and that should say a lot about how these stores put a high regard to its possibility of breaking out in the future. Recent trends about cards that only have casual appeal would usually give us the idea based on how much the foil copies are being sold for, so I'd say that you could try picking up the foil ones for bigger gains if it really does break out soon. I'd like to move my normal copies around if possible, but it should still reach the $8-$10 range barring any reprint. Just keep an eye out for it in the market.