Hello, everyone and welcome to a new edition of the Daily Stock Watch! The Pro Tour is done and over with and based on its results, I don't think there's much to say about how lopsided the format is because of Goblin Chainwhirler and his peers, so other than Demonlord Belzenlok and its Mono Black potential, there aren't too many cards in the format that we could exploit financially. With that in mind, I'd like to talk about a guy from another timeline that's gaining financial steam, thanks a lot to the arrival of its kin in Dominaria. 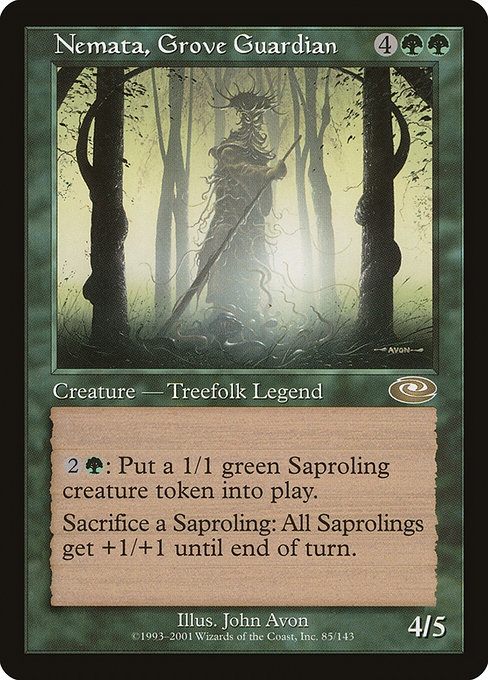 Saproling overload is now a real thing in Commander and we've got those fungi from Dominaria to thank for. Tendershoot Dryad was at the forefront of this revolution, elevating itself from mediocrity, and becoming a solid card with multi-format potential. Our card for today is considered one of their overlords, and Nemata, Grove Guardian has just reached its all-time high of $11.49 today after being on the receiving end of numerous buyouts and speculation talks.

But just how exactly does a saproling deck look like? Here's one for reference.

A bulk rare jumping to the $10 range is not new nowadays, especially with the way people are buying out cards that aren't even used in any competitive deck, but is considered as speculation shoo-ins due to its inclusion in the reserved list. Nemata is one of those guys that have gained financially because the archetype where it belongs is somehow that of a rare one, and also something that both casual and competitive crowds alike will love in the long run. As a legendary creature from a very old set, the possibility of it seeing a reprint in the future (considering the success of saproling tribal in Standard in the looming months) is not unlikely, but it is not very high on the list of things to get a reprint. If we consider that factor, it would be a good idea to start scouring your old bulk bins for this critter. This current price tag may dwindle down a bit to somewhere in the $6-$8 range if it doesn't sustain the hype but for now, I surely am a buyer.

At the moment, StarCityGames and ChannelFireball is already out of stock of Nemata, Grove of the Guardian, while there's still one more left standing via CardKingdom at $9.59. TCGPlayer sellers are already all out on the market with their new prices of $18-$22, and everyone else should follow suit eventually. Try getting your copies now from old binders in your LGS, or try scouring them from old friends who have already stopped playing. I know a lot of players who've been collecting legends in the past, and it's not too farfetched that you might have guys like this in your circle. It would be awesome if you could also dig these from bulk packages that you've purchased in the past. Also keep in mind that foil copies of this card is worth quite a fortune.