Welcome back. Today it’s time for the Part 2 of my Financial Power Rankings series for Ravnica Allegiance. You can read about the rares here. For mythics, we’ll have to wait for the redemption period to end. I expect mythic prices to decline across the board, and I’ll be studying what happens to the price trajectories of Guilds of Ravnica and Ravnica Allegiance mythics so that I know what to expect from future sets.

Today’s power rankings are going to be shorter than the rares. There aren’t that many uncommons worth discussing, but the ones that are are 🔥🔥🔥. Let’s get to it!

And remember: Treasure Chests no longer will be pumping uncommons into the market because the uncommon slot was replaced with Play Points. Investing in uncommons is among the safest and lowest-risk investment strategies one can employ.

Also remember: This next week will be a great time to invest, because folks will be selling their cards to pay for their Draft and Sealed events.

Supply for these uncommons is lower than it was in the past, but it’s not low enough for single-deck uncommons to rise beyond bulk. In theory Rhythm of the Wild serves a role as both build-around and anti-control tech out the of the sideboard, but Domri, Anarch of Bolas encroaches on that turf. I’ll be surprised if any of these rise above $0.15, but it’s not impossible.

Mortify is a control staple. If it wants to rise above bulk in the future, it needs to find a home in one or two other archetypes. A tall order, but not impossible. The power level is definitely here. Perhaps what it needs is for an enchantment set to come out—Return to Theros, anyone?

Collision // Colossus is a powerful card, useful as hate against fliers and a pump spell for aggressive beatdown decks. It has already proven its worth as a sideboard staple in several archetypes. Don’t be fooled into thinking this is a card for best-of-one only. I think it has a ceiling of $0.25, but as a penny stock I don’t think you can go wrong here.

2) Light up the Stage 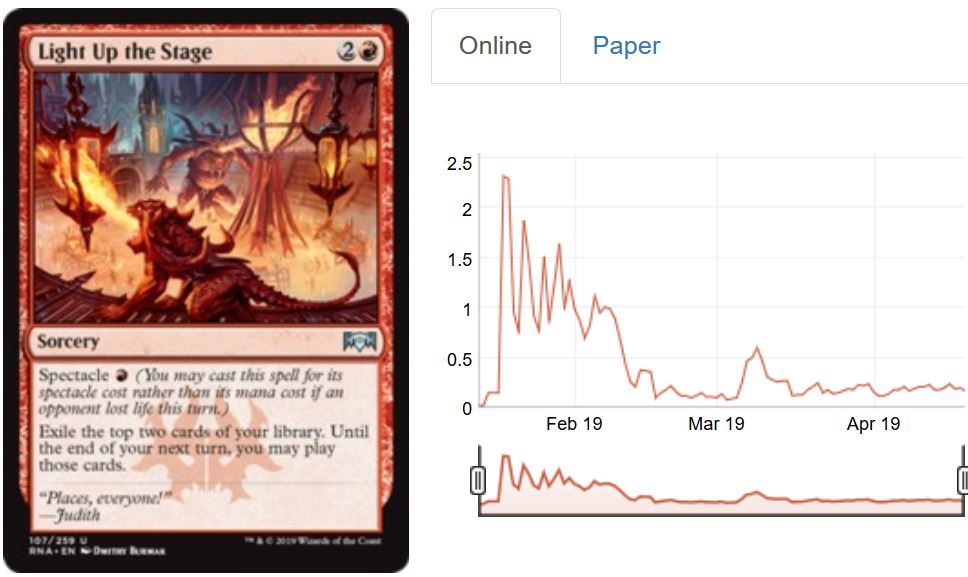 Demand for Light up the Stage, therefore, is sky high, and supply will gradually decrease over the coming months thanks to redemption. It’s hard for me to imagine Light up the Stage not being a $0.50 to $1.00 card within the coming year. My main fear lies in the fact that it got a promo treatment in paper and could find its way into the Player Reward Program, but I’ll be rolling the dice. 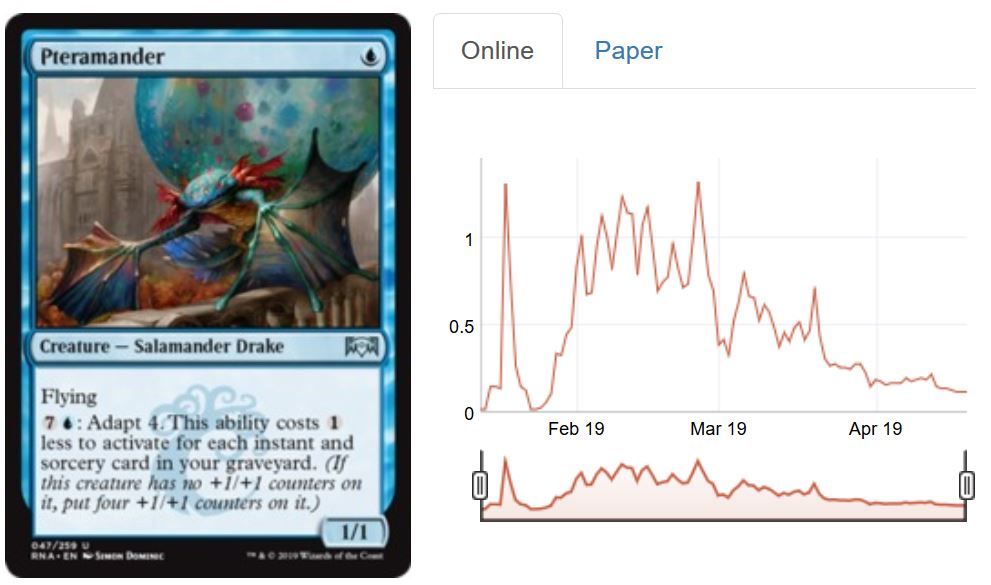 Like Light up the Stage, Pteramander is a powerful uncommon that’s seeing play in tiered decks across all formats. In Standard it sees play in UR Drakes, Phoenix or Mono-U Tempo strategies. In Modern and Legacy it sees play in Delver variants.

Even if it merely maintains current demand, I expect it to rise to the $0.25 to $0.35 range—and if it finds its way into a tier one Modern deck it could go way up. I’m surprised Wizards printed this card, and I’m surprised it has flying prior to adapting.

Thanks for reading, and let me know your thoughts in the comments below or on the QS Discord. Which cards from Ravnica Allegiance are you investing in? Are you ready for War of the Spark? I know I can’t wait to draft this set on MTGO, and maybe for the first time in a long time I’ll draft it in paper as well.