Since WoTC announced the Secret Lair series late last year, I began to actively focus on selling more than speculation on cards. The ability for WoTC to print singles on demand is a game-changer. I realize that they could reprint anything that isn't on the Reserved List already, but at least we typically were given hard dates on when to expect most products, be they supplemental or Standard sets.

The Ultimate Masters set was the first one that kind of blindsided us, but I had figured it was more of a one-time thing than a lead into this new mentality of print what they want when they want. While, I hate to be "doom and gloom", my feeling as I begin writing this article is one of pessimism. However, I feel it's important to actually have data to back up one's perspective, so I began researching the effect that these Secret Lair drops have had on the various cards reprinted in them. We actually have a pretty decent list of cards from all the currently released Secret Lair's which include:

A few important points to note;

The Stargazing Secret Lairs had a lot of cards in them and they were all released 2/14/20, so we have barely had them out for a month. I bring this up because I had concerns that the 1-month time frame wasn't enough for the market to react and the data set may be skewed due to these cards. 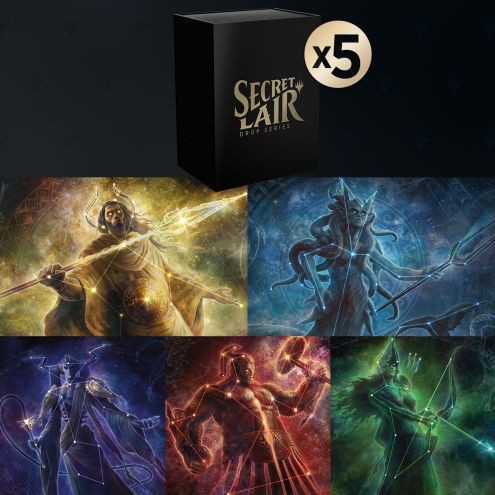 Honestly, I was quite surprised by the data. I expected all versions of the cards to take a bigger hit than they have so far. I also checked just the cards worth that were originally more than $10 and the overall drops were pretty close to the average drop percent, which was even more surprising as the more expensive a card is the more it tends to drop with a reprint.

As I scroll through Facebook MTG buy/sell groups, I do see a lot of people trying to move many of the Secret Lair cards and the prices are often somewhat aggressive which leads me to believe that a lot of these were purchased as speculation targets and we will likely continue to see a trickle of these cards keep entering the market as speculators look to liquidate.

I will also be honest and admit that I actually do regret not buying the Stargazing collection for $150 as the Theros block foil Gods all have maintained most of their value with the largest drop being Athreos, God of Passage at 22.64%, whereas, most others have remained steady at 10% or less. I might even end up buying a few of the cheaper Stargazing Gods as the steadiness of the original print foils makes me believe that there is plenty of demand for these cards.

I have not purchased a single set of the Secret Lair series, as I didn't feel like they were a good investment, and I expect far worse price drops.

One thought on “Insider: The Effect of Secret Lairs”