About twenty months ago, I wrote a deep dive article into a previously underappreciated set: Collectors’ Edition (and International Collectors’ Edition), or CE/IE for short. Additionally, I provided background on these sets back in a December 2019 article.

The short version is, initially released in December 1993, this extremely low print run collectors’ set was once panned as a collection of unplayable cards best suited to display cases and the like. However the surge in Old School’s popularity, combined with the overall increase in casual play has driven up demand for this set.

Since practically everyone uses sleeves nowadays, there is virtually no downside to shuffling up CE and IE cards as budget alternatives to their original Alpha, Beta, or Unlimited counterparts. In the case of Alpha and Beta, these also offer a similar black-bordered aesthetic, in some cases meriting a premium versus white-bordered sets Unlimited and Revised.

But after surging to new highs in 2021, Collectors’ Edition cards have seen a measurable pullback. What’s going on here? Is the budget Old School trend dying? Or is this a prime pullback opportunity to load up on discounted cards?

A Look at a Few Charts

Don’t take my word for it. Let’s review a few price charts to observe the downward trend I’m noticing in Collectors’ Edition cards. For example, how about Reserved List, Commander staple Copy Artifact? 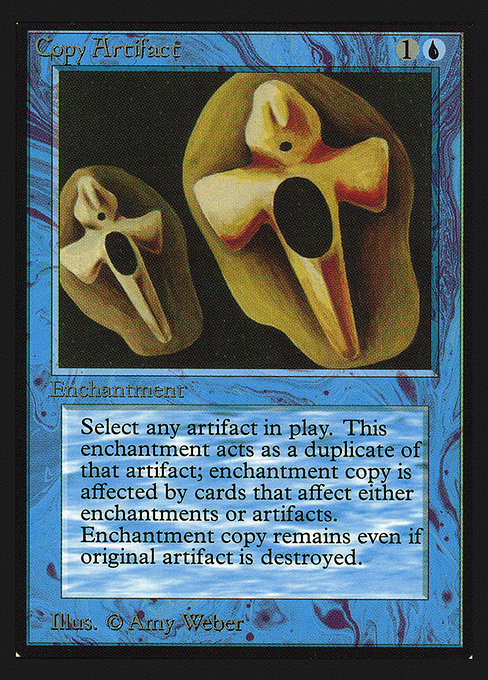 Both retail pricing and buylist pricing are following identical trends on this card. In early 2021, its price spiked and buylists tripled from around $33 to over $90 for near mint copies. The jump in retail pricing was even more significant, increasing as much as fivefold at peak. The buy price peaked at $140 in March 2021, however, the card’s price has been gradually declining. There was a temporary reprieve from the decline in February of this year, but the downward trend picked up once again. Today, the best buy price is in the $70 range. 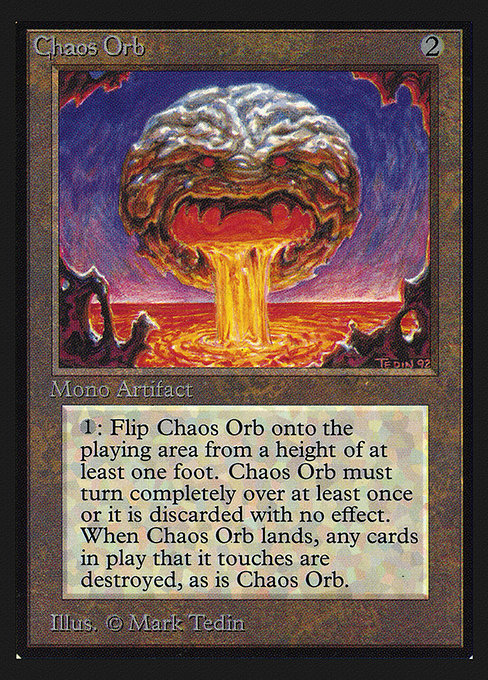 The card’s price ran up in early 2021, then peaked before pulling back from highs. Both retail pricing and buylist pricing followed suit here again. Then the top buy price did increase a little bit earlier this year, but that trend looks to have begun a reverse. Additionally, the TCGmid pricing and retail price have both been dropping this year. Another indication of a cool-off.

My final example is Birds of Paradise, another all-around staple with significant play across numerous formats. 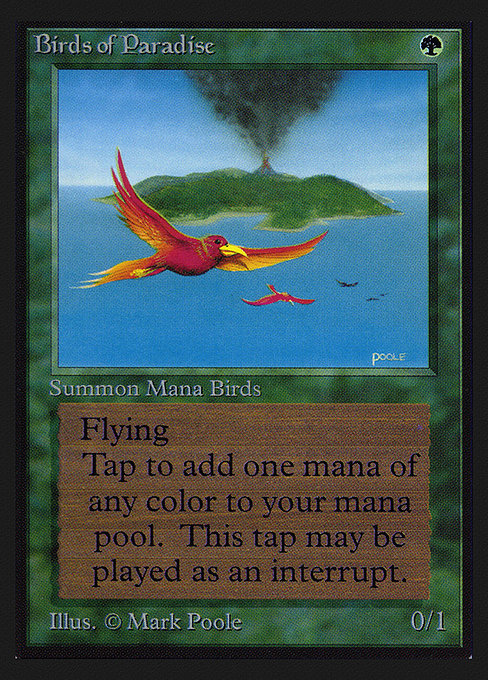 If we change the y-axis a little bit, this chart looks identical to that of Copy Artifact. A sudden surge in early 2021 followed by a lengthy cooldown period. However in this case, it’s possible we’re seeing signs of a bottom in 2022. Both the best buylist price and retail price seem to have been stable in April 2022 (the best buylist price even increased during this time).

Is this a screaming buy signal? Can this be the prime opportunity to jump in and acquire Collectors’ Edition cards on the cheap before they return to all-time highs?

To cut to the chase, I’m only cautiously optimistic that this is the all-and-out bottom for Collectors’ Edition. On the one hand, too many cards from the set still display some downward pricing momentum as copies continue to return to the market. Likely what we saw in 2021 was a surge in buying, drying up market supply on these incredibly rare cards.

On the other hand, their print run (9,000 CE sets and 5,000 IE sets) are on the order of magnitude of Beta and Unlimited, so the number of copies that exist are relatively tiny. Cards as rare as these are hardly what I would call “plentiful.” We have seen some rebound in supply in these cards as prices climbed. Suddenly, it was worth it for vendors to list their CE/ICE cards for sale on TCGplayer, or start acquiring them on buylists, or start bringing them to large Magic events. As prices climbed, stores restocked from buylisting. However, would you consider this a “healthy supply?”

Granted, these listing numbers don’t include any listings that contain pictures. For example, there are actually 22 listings for CE Taiga when listings with pictures are factored in—not the 12 indicated in the picture above. That said, is 22 really all that much of a difference? We’re still talking low double-digit supply on these cards, or even less. The total number of listings for Wheel of Fortune: 9! 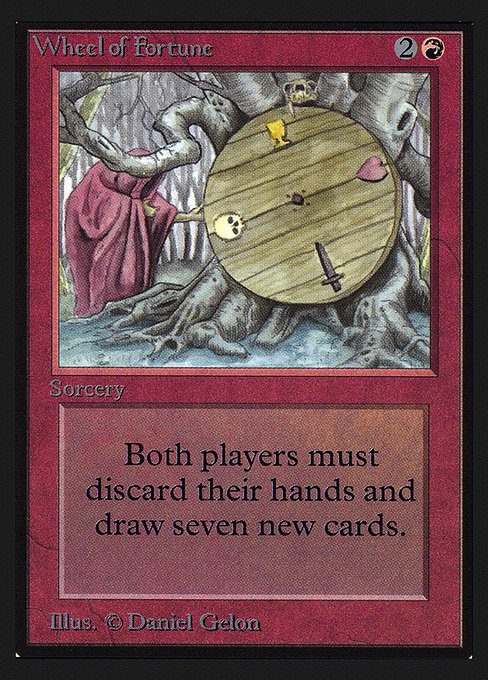 I checked out Card Kingdom’s supply as well, since their pricing is most dynamic. In a few words, I’d describe their Collectors’ Edition inventory as spotty at best. They seem to be out of stock or low in stock on every other card (worth playing).

With supply this inconsistent, I suspect pricing is still going to be in flux as Card Kingdom strives to replace its diminished supply. The result: prices are likely to climb on the cards that are out of stock. The adjustments may not happen overnight and it may not happen on a weekly basis. Over a period of a couple months, however, Card Kingdom is likely to adjust their prices as required to restock inventory.

The story is very similar over at Star City Games—they currently have 78 Collectors’ Edition cards in stock. The rest are sold out.

If we examine this market strictly from the supply side, I’d predict prices are starting to bottom and a bounce is on the horizon. However…

Could Demand Be Softening?

For prices to climb, you need both supply and demand to be working for you in the same direction. I’m observing that supply looks a little thin, but prices won’t necessarily climb unless demand at least remains robust in tandem. I’m not so confident this is currently the case.

For example, during its peak, I saw Collectors’ Edition Power (sans Black Lotus and Timetwister) selling for north of $1,000 on the Old School Discord. These were hot items, and moved fairly quickly. I had a couple moxes myself, which I sold for $900-$1,000 each amongst a backdrop of competitive buyers.

Now I see copies occasionally posted in the $800-$900 range. Sure, this isn’t a significant dropoff, so it may not be all that concerning. Likely the $1,000+ price tags were an overshoot, and now we’re in a more stable price range. But I can’t help but flag this as a minor watchout.

What’s more, I have seen prices on Old School cards specifically gradually pullback. Heavily Played Library of Alexandrias were once easily salable at $1,500—at one point, Card Kingdom was even buying at that rate! But recently, I had difficulty moving my heavily played Library for much more than $1,200.

Likewise on Chaos Orb, I could have sworn Unlimited copies were minimum $1,000. But I couldn’t move a heavily played copy for more than $900, and I see other sellers having equally difficult times selling their copies for four figures. Similarly, I’m seeing Card Kingdom’s buylist pull back from highs on many Old School staples and classic collectibles (outside of Alpha and Beta).

The jury is still out on Collectors’ Edition cards. On the supply side, I’ve observed the available copies for sale are relatively thin. The fact that there are less than 25 copies in stock of many popular Commander staples especially (Wheel of Fortune, Dual Lands) tells me prices could bounce soon. However, I need to see a bit more stabilization in broader Old School demand before I could give the flat-out all clear for buying.

My most pragmatic advice would be to monitor which Commander staples have the thinnest inventory, and prioritize acquiring those cards if you insist on buying up CE cards. Wheel of Fortune would be a good starting point, as there are only 9 listings on TCGplayer. That said, no copies of the card have sold since February of 2022, so don’t expect to flip these for profit anytime soon. This is what I mean by a softening demand, and how we need to see this rebound before prices can really move. Anything you acquire now, plan to sit on for at least a few months and possibly longer.

The good news is, you’ll have plenty of opportunity to shuffle these cards up and play at your kitchen tables while you wait for prices to climb. A card like Wheel of Fortune, or a Dual Land, or Birds of Paradise have plenty of utility across multiple formats. As long as you’re playing in an unsanctioned game and your friends don’t mind, Collectors’ Edition cards are a fantastic way of improving the aesthetic of your deck on a relative budget while also doubling as a rare collectible for long-term investing.

To me, that is the best of both worlds.

One thought on “Are Collectors’ Edition Prices Stable?”