So when I was asked to write for Quiet Speculation, I wasn’t entirely sure what to write about. There is a lot going on in the world of the DCI and Judging in general. There are policy changes, cool judging experiences, awesome EDH questions, and so much more. What was I going to write about? Well, why do I have to pick just one? So each week I’ll have an article up here about something interesting in the life of a Judge!

Now that that is all out of the way, what is this article going to be about? Well, I’m going to discuss an interesting Judge call I got while working US Nationals this year. I was a floor judge for day one of the event. I spent most of my time fielding judge calls and answering questions. Things were going smoothly and nothing terribly exiting had come my way through the standard portion of the event. Then during the second round of the first draft I catch a judge call. 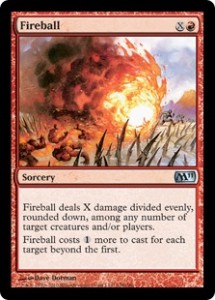 “JUDGE! I have a question. I cast a Fireball, targeting a Prodigal Pyromancer and a Fiery Hellhound. I tapped one R for the cost, 3 for X, and 1 for the additional target; and I said ‘2 to the Hellhound, and 1 to the Pyromancer.’ My opponent says that I can’t do that, what happens?”

There are a couple of interesting things happening here, more than might seem at first glance. The first thing that I looked at was what the exact wording on Fireball was. “Fireball deals X damage divided evenly, rounded down, among any number of target creatures and/or players.” So the only thing that a player gets to decide is the value for X, and the targets. The final cost of the spell is then determined by the number of targets. This player did in fact hit both of those requirements, and cast the spell.

My initial ruling was that his Fireball was going to be less exciting than he had hoped. X = 3, divided evenly (rounded down) between 2 targets, each target takes one. The Hellhound gets away only slightly more fiery than before.
The flame throwing player than asks me this, “If what I said couldn’t have actually happened, isn’t that an illegal casting of my spell? Shouldn’t it be rewound back into my hand?”

Well, he is half right. If he had truly cast the spell illegally, we would have rewound the spell, untapped his lands, and let him try again. In this case however he cast his spell legally, it just wasn’t going to do what he wanted it to do. Just because I say “I draw four cards” when I cast my Ancestral Recall, doesn’t make it true. Or more importantly I don’t get to take my Recall back after I realize I’m only going to draw 3. I stuck to my original ruling. Needless to say, the player asked for an Appeal.

Off I go to get Eric Shukan, Level 3 Judge and Head Judge of US Nationals. I explain the situation at first and Eric and I have a brief discussion about what exactly goes into casting a spell and weather this player’s argument held water. In the end, we determined two things.

First, there are many individual steps to casting a spell, most of which, many players just gloss over and hit the important parts in any order. And from a judge’s standpoint, we are 100% okay with this practice. If players took the time to announce each step of casting their Lightning Bolts, or heaven forbid, their Cryptic Commands, you would need a lot more than 50 minutes to play best 2 out of 3 games. The important thing is that each step is only done if the spell you are trying to cast requires you to. Fireball requires you to: announce your spell, choose a value for X, choose target(s), determine the cost, and pay the cost. Since Fireball does all the dividing itself, the player isn’t allowed to make the choice of 2 and 1. It isn’t even offered to him.

Second, this is US Nationals! Each player had to play his way to this event one way or another. Either by earning rating, or placing in a Nationals Qualifier, they had to be at least vaguely familiar with Magic or how things work. At this level, and at this Rules Enforcement Level (REL, Competitive), you are required to know what your cards do. You should know what your cards do. Fireball is a new card though isn’t it? Wait hold on (http://gatherer.wizards.com/Pages/Card/Details.aspx?multiverseid=221511) Oh right, Limited Edition Alpha was its first printing, so this card has been around a while. We can’t even use the prerelease excuse of “It’s a new card and I didn’t understand how it works.” At a Competitive REL event that excuse doesn’t work anyway, but even more so with Fireball.

After our discussion, Eric approached the table and upheld my original ruling. One dead Pyromancer, one Fiery Hellhound, and one wasted mana. The best part about this, was that as Eric was walking away, another judge had an appeal from another table with the same Fireball slip up. Only this time we had a Baneslayer Angel survive while a Canyon Minotaur with an Ice Cage on it was suddenly taking 3 instead of one. Same ruling, much worse outcome for the player casting Fireball, but a good example of how we, as judges, can’t take the game state or outcome into account when making a ruling. No matter how bad it is for the player, Fireball will always be divided evenly (rounded down).

That’s all from an event that happened 3 months ago, but I thought it would be a good icebreaker for us. If you have any questions you would like answered about this or anything rules/policy related, feel free to email me allon3word at gmail.com.

Here are the steps of casting a spell, mostly from the comprehensive rules, but not quite as wordy. Keep in mind that if your spell doesn’t require you to do any of these steps, you just skip them.

1. Announce your spell. Take the spell from where it is (usually the hand, but sometimes other zones) and put it on the Stack (the stack is another bonus rules stuff for another week)

2. Choose any Modes (see Cryptic Command). You also announce any additional or alternative costs at this point (buyback, kicker, convoke, etc.) This is important because you some of the choices in the next few steps may depend on modes, kickers, etc.

3. Choose Targets. The comp rules section for this step (601.2c) is really long and wordy, but there are a lot of intricacies involved here, but my oversimplification sums it up in two words.

4. Choose how effects will be divided or distributed. This was the key step in our article today, even though we never legally used it.

6. Activate mana abilities. Usually this means, tap your lands, but there are other things that produce mana too.

7. Pay your costs in any order. This can be many things: sacrificing things, or tapping creatures, but usually this is just mana.

8. Your spell is officially cast. Many triggered abilities that say “when a spells is cast” trigger right now.

9 thoughts on “JUDGE! I Have a Question – Fireball”