If you came here because you liked Part 1, great! Because we're jumping right into Part 2.

“Judge! I cascaded with my Bloodbraid Elf. I flipped up 4 cards and then a Volcanic Fallout. I don’t want to cast the Fallout, what happens to it?”

Cascade exiles cards from the top of your library until you exile a nonland card that costs less. That card is still exiled if you choose not to cast it, and is one of the “exiled cards” that get randomized and put on the bottom of your library.

“Judge! So we were half way through playing our first game when we happened to look at our Result Slip and noticed that one of us isn’t supposed to be at this seat. The match next to us has one person that didn’t show up, but that person was supposed to be one of us. What happens now?”

So for those who may not know, a Result Slip is used to easily track match results for each match in a tournament. It is printed with both player’s names and DCI numbers so the person entering results into the computer can do it easily. There used to be a penalty that specifically handled when a player played the wrong opponent. Now however, we just treat it as if the player was tardy to his match. It had been more than 10 minutes, which means that this player unfortunately earned himself a Match Loss for not showing up to his seat on time. It might seem a little harsh, but it is ultimately each player’s responsibility to make sure they make it to the right seat on time. 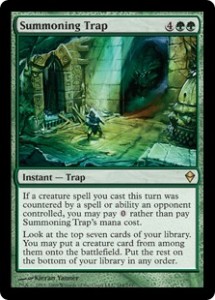 “Judge! My opponent tapped six lands and cast a Primeval Titan. I used Cryptic Command to counter it and draw a card. That resolved, and then she cast a Summoning Trap, looking at the top seven cards and put a second Primeval Titan. At this point, I noticed that one of her 6 lands in play is a Terramorphic Expanse. So she didn’t have enough mana to cast the first Primeval Titan in the first place. What happens now?”

I’m going to go into more detail about this situation next week, but for now I’ll just say that I didn’t back up the game: the Summoning Trap resolved as described and both players received Warnings.

The rulings here was a Warning for a Game Rule Violation for the Titan-casting player, and a Warning for Failure to Maintain Game State for the opponent.

"Judge! My opponent was going to cast a Vengevine. To speed things up while he tapped his lands I asked ‘so I take 4?’ He nodded, so I recorded the 4 damage on my life sheet and quickly took my turn. Just before I passed my turn, I looked over and noticed that he had put the Vengevine into play and left it untapped. So he didn’t attack me, but he insists he meant to. So did he, or didn’t he?”

I decided that based on their verbal acknowledgment, and the fact that both players had recorded the damage, the attack happened. Just because the card happens to be straight up instead of turned to the side, both players at one point agreed that an attack happened. I didn’t think that this player should be able to try to shortcut turns and then try to take advantage of it. 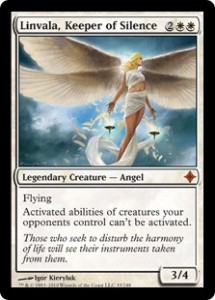 “Judge! If I have a Linvala, Keeper of Silence in play, can my opponent unearth his Hell's Thunder.”

“Judge! My opponent cast a second Vendilion Clique when he already had one in play. Does he get to take a card from my hand even though his Clique will die to the Legend Rule?”

The ability will still trigger. The creature entered play, it was just immediately put in the graveyard thereafter. So yes, he will get to take a card from the player he targets.

“My opponent cast a second Vendilion Clique 3 turns ago. Neither of us realized until now though that it’s legendary. What happens now?” 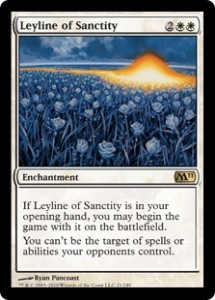 “Judge! My opponent has a Leyline of Sanctity in play. Can I cast a Lightning Bolt and hit his Jace, the Mind Sculptor?”

No. In order for your Lightning Bolt to hit Jace, you need to target Jace’s controller and then redirect the damage to Jace. If you can’t target the player, Jace is safe as well (from Lightning Bolt).

“Judge! I cast a Tidehallow Scholar and my opponent doesn’t have any cards in his hand. What happens?”

The ability triggers, and resolves. You get no card. Not every question has a fun explanation. 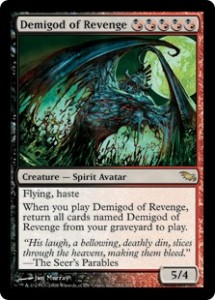 “Judge! I cast a Demigod of Revenge, my opponent used a Mana Leak on it, but didn’t say whether the Demigod’s triggered ability resolved first or not. What happens?”

This is an unfortunate situation for the control player. You don’t have to specifically announce that you put the Demigod trigger on the stack; that happens automatically. You do however have to specify that you let the trigger resolve. If you don’t, it will still be there when your Mana Leak resolves. Then when the Demigod trigger finally resolves it will put all of the Demigod of Revenges in the graveyard into play, including the one that was just countered.

“Judge! I attacked my opponent. He blocked with his Kitchen Finks, but still took lethal damage. He claims that the Finks Persisting back into play will keep him alive. Is this true?”

Sadly both the player and the Finks die at the same time. There won’t be a chance this game for the Finks to persist as it usually does.

“Judge! My opponent and I were playing pretty fast and I didn’t notice after he started his turn that I had 8 cards in my hand still.”

This is very honest of a player, and the penalty is not harsh for this either. Just discard now and issue a Warning.

The ruling here was the player with 8 cards received a Warning for a Game Rule Violation. 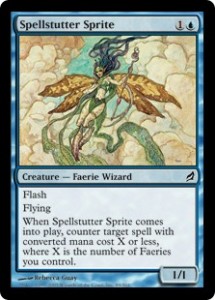 “Judge! My opponent cast a Figure of Destiny and in response I cast a Spellstutter Sprite. When it resolved I tried to counter the Figure. My opponent responded by Lightning Bolting my Sprite. Does his Figure still get countered?”

Spellstutter Sprite’s triggered ability counts the number of Faeries you control when it resolves. If your Sprite falls to a Bolt, you will have zero Faeries in play, and the Figure will not be countered.

“Judge! Can I sacrifice my Burrenton Forge-Tender to my opponent’s Valakut, the Molten Pinnacle and prevent all of its damage for a turn?”

The Forge-Tender only can prevent damage from a red source. Valakut is a land and lands are colorless, regardless of what type of mana they produce.

And there you have it! These were the more interesting questions asked at this PTQ. I hope this can help you test for future Extended tournaments, or even just answer some burning questions about how things work. Until next week!