We covered some of the common ones last week, lets get right into the rest of the State Based Actions.

Tokens not on the battlefield cease to exist.

When your tokens die and go to the graveyard, or get returned to your hand, or even when they get phased out, they will disappear.

A copy of a spell or ability anywhere other than the stack ceases to exist.

If you Remand a copy of a spell, it wont stay in your opponents hand long enough for them to do anything with it. This takes care of that unlikely scenario.

If two legendary permanents with the same name are in play, both of them are put into the graveyard.

This one has been around forever, and most people know of it as "The Legend Rule."

If two or more permanents have the supertype world, all except the one that has been a permanent with the world supertype on the battlefield for the shortest amount of time are put into their owners’ graveyards.

There hasn't been any printed in a while, but "Enchant Worlds" are still legal in Eternal formats, so this rule still exists. Your Bazaar of Wonders and Caverns of Despair can't be in play at the same time, sorry.

When your creature dies, the Auras attached to it have to go somewhere. Also, any active Mutavaults that have Pacifism on them will be less passive when the turn ends.

If an Equipment or Fortification is attached illegally to a permanent, it becomes unattached.

If your equipped creature gets protection from artifacts, all equipments fall off. And when Darksteel Garrison finally sees the light of day again, we might see this SBAs full potential. 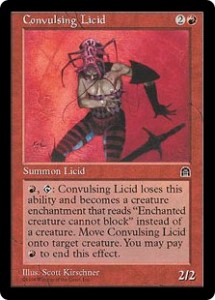 With Tezzeret, Agent of Bolas making artifacts into creatures, this SBA has seen a lot more action lately than it usually does. The last time it was really in use, Convulsing Licid was wreaking havoc on Judges everywhere.

If a permanent has both +1/+1 and -1/-1 counters on it, remove one of each in pairs until there are no longer both counters on the permanent.

This exists mostly to keep things clean. If you had to keep track of both counters all the time, some games would get quite cluttered.

This one seems like it should just be common sense, but the Comprehensive Rules tries to make sure all its bases are covered. If your Melira's Keepers ends up with counters on it somehow, this SBA will take care of them for you.

The last three are for non-traditional games of magic.

In Two-Headed Giant, if one team has zero or less life, that team loses the game.

In a Commander game, a player that’s been dealt 21 or more combat damage by the same commander over the course of the game loses the game.

These cover a couple of new ways to lose a game. The 2HG rule is pretty standard, but the Commander (EDH) rule is pretty interesting if your not familiar with the format. If you aren't, you should be!

In an Archenemy game, if a non-ongoing scheme card is face up in the command zone, and it isn’t the source of a triggered ability that has triggered but not yet left the stack, that scheme card is turned face down and put on the bottom of its owner’s scheme deck.

And finally, Archenemy is the newest variant of Magic, and with it comes our newest SBA.

And that's all 21 of them. These are the rules that truly keep the game of Magic going. So the next time your creature falls to Infect, or even worse, you lose the game to the same ability, you will know exactly why things happen the way they do.

As Always, Keeping it Fun,

One thought on “State Based Actions and You Too!”