Zendikar was one of those curveball blocks that we see from time to time, those that mess with the presently established order of BIG SET-small set-small set. While 2009's titular release and the subsequent Worldwake hewed to the formula, the third set in the block broke the mould and was decided that it, too, would be a BIG SET release. In many ways, time has shown that this was the right call, especially in Limited, as Rise of the Eldrazi was successfully received (indeed, no less a luminary than Marshall Sutcliffe of Limited Resources has pronounced ROE-ROE-ROE to be the best draft environment of all time).

Of course, one of the more lamentable aspects of the set's structure was in its execution and the fractious way the sets flowed into one another. In Rise of the Eldrazi's case, it was a set in a bubble, with little other than concept and flavour to tie it to Zendikar/Worldwake. The established mechanics (landfall, allies, etc) weren't supported in Rise, which instead gave us some new toys to play with in the form of level up and rebound. Still, this yielded some very diverse ground within the Intro Pack decks released along the way. Today, we'll be looking at the block as a whole and selecting the best of the bunch.

5. Eldrazi Arisen (Rise of the Eldrazi)

Not every intro deck is successful at representing the themes and concepts behind a particular set, but Rise of the Eldrazi did a better job at this than most. Billed as "Battlecruiser Magic," the core concept was simple: use the early and midgame to accelerate your mana growth through spells and effects that generated Eldrazi Spawn tokens, then sac them all to buy in on a giant Eldrazi which could end the game all by itself. Eldrazi Arisen was the set's red-green version of the strategy, and by tapping green's ramp abilities with cards like Ondu Giant and Growth Spasm, you'd often be well underway before you even generated your first Spawn token. Of course, Awakening Zone did its share of heavy lifting to help get you there, and Rapacious One all but guaranteed it if left unchecked. Once you had the right mana, it was goodbye Spawn tokens, hello Hand of Emrakul or Ulamog's Crusher!

Alright, so what's the catch? The deck had a fairly gaping hole in the front-end and could easily be blown out by a quick, aggressive opponent. This might normally be mitigated with a decent removal suite to pick off a few early threats, but Eldrazi Arisen whiffed here as well: two [card Flame Slash]Flame Slashes[/card] and a Windstorm were about the extent of it. Still, these handicaps couldn't have been too insurmountable; this deck was the 2009-10 Precon Champion. 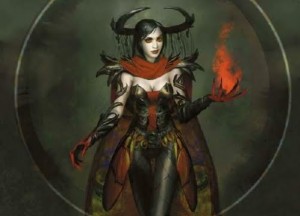 4. Invading Spawn (Rise of the Eldrazi)

Were I just looking for a representative sample I might not have included both, but the best is the best after all. Being Rise's other "Battlecruiser" precon, Invading Spawn took the archetype into a darker place, keeping the red but swapping out the green for black. This opened up a whole new world for the deck, a world where you could reliably kill an opponent's creature outside of combat, with spells like Corpsehatch, Vendetta, and Lightning Bolt.

The deck's premise remained the same: generate Eldrazi Spawn (through Emrakul's Hatcher, Rapacious One, and Pawn of Ulamog), then cash in. Where Invading Spawn gets the edge is in its versatility. In addition to summoning an Eldrazi, the deck had other ways to use that mana in the event you didn't draw your otherworldly beatstick. A massive Fireball to the face would end games just as quickly as a rampaging Hand of Emrakul, and Drana, Kalastria Bloodchief could slurp up multiple creatures in a turn and bloat her power for an attack. Although its mana curve was similarly back-heavy, Invading Spawn simply had better ways to keep its pilot from being overrun in the early game.

3. Rise of the Vampires (Zendikar)

Looking at the history of the Vampire tribe, you see that Zendikar was a very exciting place to be for everyone's favourite bloodsuckers. After being marginalised as a fringe player for most of Magic's history in favour of their shambling, shuffling Zombie kinfolk, Magic R&D finally decided to bring them in from the cold (and higher rarity levels) and take them into the mainstream. Zendikar was the vanguard for this, and Rise of the Vampires was a full-trumpet proclamation. With a few exceptions (see: the Core Sets), mono-coloured decks had been fairly uncommon. The last time we'd seen one was Lorwyn's Kithkin Militia, and there hadn't been an expansion-set mono-Black deck since Betrayers of Kamigawa's Rats' Nest (the one with Umezawa's Jitte in it) in 2005.

The deck itself was very solid. It stayed relatively true to a fittingly aggressive mana curve and was packed with flavour. Its foil premium rare, Malakir Bloodwitch, not only had great tribal synergy with its minions, but also was strong enough on its own to see Constructed play, while its other rare Blood Tribute, while expensive, could do some truly wicked things.

As if giving this relatively unknown commodity a small choke on the throttle, Rise of the Vampires was a bit on the light side for removal. Sure you had a Hideous End and two [card Feast of Blood]Feasts of Blood[/card], but that was it (aside from the untargeting [card Gatekeeper of Malakir]Gatekeeper of Malakir's[/card] edict effect). Almost like a green deck, you were expected to do your talking in the red zone, with the combat tricks (two [card Vampire's Bite]Vampire's Bites[/card] to prove it). This was a restriction that wouldn't last very long. 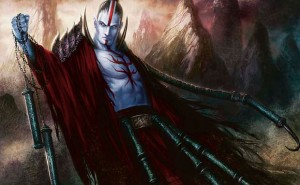 2. Fangs of the Bloodchief (Worldwake)

Call it "Rise of the Vampires 2.0" because that's essentially what it was. Fangs of the Bloodchief had all the aggression of its predecessor, and with twice the removal. Sure some of the removal was a bit convoluted (see Brink of Disaster and Dead Reckoning), but it also had one thing that Rise of the Vampires was begging for: reach. The commonly-held (and largely true) notion about aggro decks is that if you haven't gotten there by turn 5 or so, you're just not going to. Having run out of steam, the best thing you can hope to do is die quickly so you can get another game in. Any aggro player will know the feeling of getting your opponent down to "burn range," only to see them stabilise with bigger bodies on the board and claw back to life. With red decks you might still topdeck a [card Lightning Bolt]Bolt[/card] and take the win, but oftentimes you were pretty much dead in the water.

That makes the inclusion of a Consume Spirit here all the better. Now you not only could reach your opponent with direct damage, but as an X-spell your only limit was the amount of mana available to you at that point in the game. Although the deck did cut the number of [card Vampire Nighthawk]Vampire Nighthawks[/card] in half from its predecessor, you had plenty of strong options like Bloodhusk Ritualist and Anowon, the Ruin Sage to keep your opponent under your thumb.

As before, you had a few cards that were included seemingly to slow you down. Butcher of Malakir, the deck's foil premium rare, is almost prohibitively expensive, and most games should be resolved even before you have enough mana to cast him. Two [card Piranha Marsh]Pihrana Marshes[/card] are a definite choke on speed for a nearly-useless tradeoff of a single point of damage (though Piranha Marsh kills are things to be cherished and gloated over amongst friends). Still, after the tri-colour kaleidoscope that was Alara block, the message couldn't be clearer: disco's out, murder's in.

I've frequently derided Zendikar block for being a low point for preconstructed decks, and with good reason. In addition to setting records for the highest Core Set filler content, it broke the "showcase the set" dictum by leaving Traps and quests virtually out in the cold. One thing it did get right, though, is with the Allies, and The Adventurers was their moment of glory.

A weenie-deck-with-a-twist, the Ally mechanic helped compensate for one of the weaknesses of a cheap creature swarm strategy, which is having your bodies simply outclassed the longer the game goes on. With a Runeclaw Bear, what you see is what you get. Unless you slap an aura on it, it's never getting any bigger. For the same mana cost, though, you could instead have an Oran-Rief Survivalist which can easily end up a 4/4, 5/5, or bigger. And in an unusually focused turn, the deck only carried three creatures (Awakener Druid, Borderland Ranger, and Greenweaver Druid) that were not Allies. 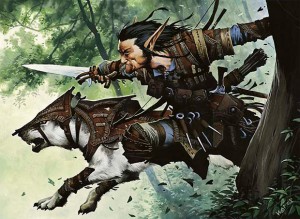 Packing a powerful punch while showcasing one of a set's premier mechanics while playing well with itself earns The Adventurers best-in-show honours. Although it was a touch light on the removal, it still carried some direct damage (a Fireball) for that end-of-game finisher or was a way to clear the field. It's rares, a Kazuul Warlord and Turntimber Ranger, created strong synergy with the rest of the deck to a degree not often seen. Indeed, it's likely no coincidence that other decks with such strong rare-card synergy also made the Top 5 list.

And there you have it! Admittedly with the amount of mediocrity in the set it wasn't a crowded class, but these five truly represent the best the block had to offer. They championed their respective sets in an effective manner that was fun to play. What more could you ask for?

Of course, your results may vary, and I'd love to hear your thoughts on these decks or others in the block you might have played.

Second Chance for a Prerelease Contest

With over 80 entries, this was a popular contest! I'd like to thank everyone who participated, and with such a wealth of both earnest tragedy as well as creative talent out there, it's a bit of a shame we only have one prize to award. The judges were very split, enjoying many of the submissions for different reasons. But almost without exception, one name kept cropping up, and we have a winner!

Nathan, who missed the prerelease due to military deployment in sunny Kandahar City. Quiet Speculation is delighted to offer him this welcome alternative to buzkashi and kite-flying. Congratulations, Nathan!

Some honourable mentions singled out by the judges are hamiltonianhurst ("The Grinch" parody), Cain Galt for his loyalty to his local gaming store, and Windborn Muse for passing the game on to the next generation.

8 thoughts on “The Five Best Intro Decks of Zendikar Block”