Today I'll be tuning a deck set to me by Panahinuva. Panahinuva's deck uses Bosh, Iron Golem as it's commander, and is designed for multiplayer play.
Based on the feedback from last week I'm going to tune up the deck, making sure to keep Bosh as the General, then  run it through a test game on Magic  Online.

1 Darksteel Citadel
1 Dwarven Ruins
1 Forgotten Cave
1 Glimmerpost
1 Great Furnace
1 Keldon Megaliths
1 Kher Keep
1 Mishra's Factory
1 Teetering Peaks
1 Urzas Mine
1 Urzas Power Plant
1 Urzas Tower
23 Mountain
At eight mana, with a﻿n activated ability of converted mana cost four, Bosh isn't the world's most competitive competitive. He has the ability of a pressure deck, but not the overall mana cost. He is, however, rather appealing in that he's not terribly frightening as he's in red, often considered the worst of the Commander colors.

As such, multiplayer-speaking, you may be able to keep the heat of yourself while you set up your kill conditions: a slow, creeping army that suddenly goes big.
The deck sent through is rather slavish to the modular theme (counters, counters, and more counters), playing most of the Arcbound creatures avaialable as well as a number of 'clockwork' creatures, backing this up with some proliferation enablers (including the original proliferators, Energy Chamber and Power Conduit).
Although it has great synchronicity betweeen cards, individually the power level of many of thechoices is pretty low. However, as tempting as it is to add Worldgorger Dragon and in keeping with the recent deck-tuning feedback, I'm going to try to keep to the theme and not drop in stock-standard power combos.

1 Ghost Quarter
1 Dwarven Ruins
1 Sandstone Needle
1 Keldon Megaliths
1 Valakut, the Molten Pinnacle
1 Shinka, the Bloodsoaked Keep
1 Stalking Stones
1 Mishras Factory
1 Tectonic Edge
1 Temple of the False God
1 Smoldering Crater
1 Great Furnace
1 Dormant Volcano
33 Mountain
Sgt Control's deck took a very different take on Bosh, using a mix of fast mana and land destruction to keep down opponents while smashing face with some pretty large creatures. What surprised me was the lack of instants, sorceries and enchantments in both decks. I can understand the appeal of going 'all-in' with artifacts as they do tend to be somewhat fragile on the multiplayer board.

Looking at the deck list I certainly wanted more disruption, faster mana, more recursion, and some alternate sacrifice outlets than Bosh. Scrapping around I came up with 54 cards thought of working into the deck. 54 cards is a lot, so they can't possibly all make it in. 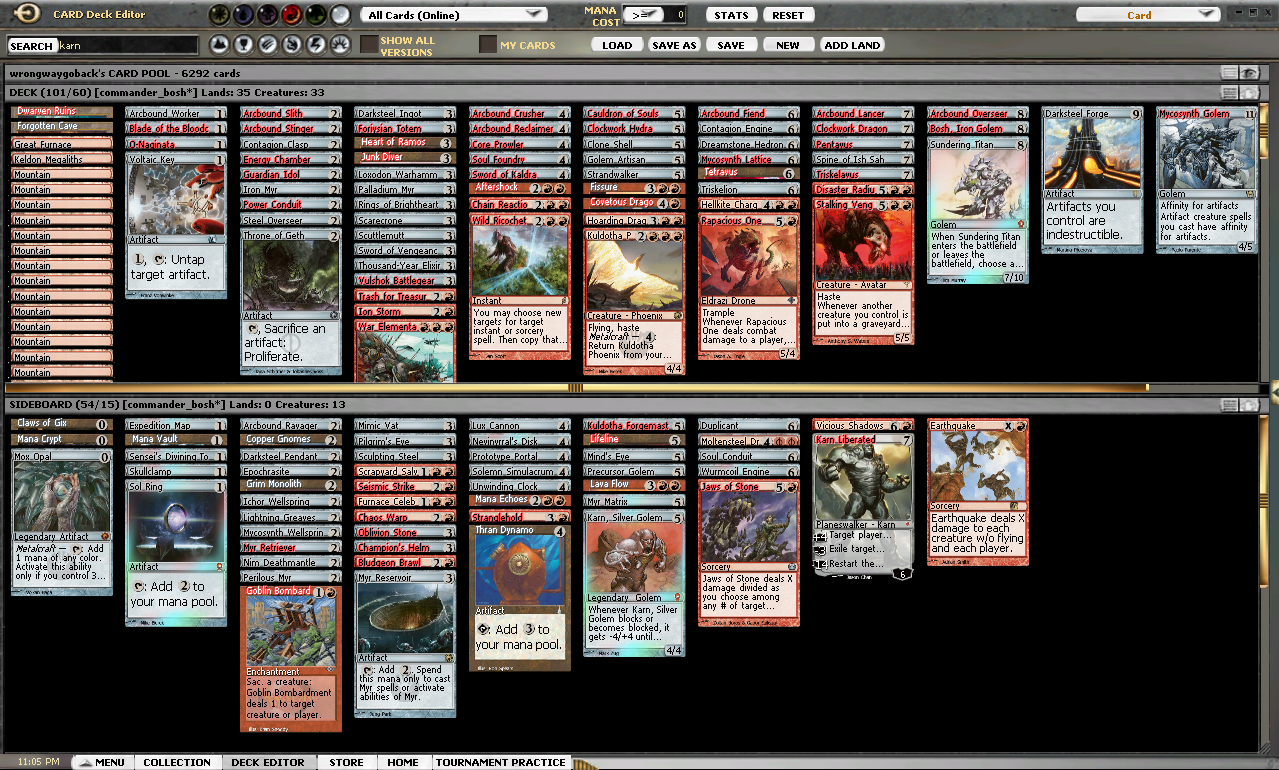 The Mox Opal could be a Mox Diamond, Basalt Monolith, Coalition Relic, or Felwar Stone, depending on how you feel.

The suite has less of a downside in Bosh than most other decks. First, he has no problem with the fact the fast mana suite produces colorless mana. Second, he can sacrifice away the Mana Crypt and Mana Vault if life totals become dangerously low.

With all the sacrifice effects going on I wanted to build a sacrifice support suite.

There's a pretty broad range of casting costs amongst those cards so should be able to have a sac outlet any time I need it, to varying effect.

If I'm sacrificing all this stuff, I want some ways to get extra value out of the stuff that's heading to the graveyard dying.

Voltron, form! Okay, we're not necessarily assembling a doomsday machine, but the Arcbound gang do a good Voltron impersonation. The creatures I chose are as follows:

To be frank, I’m not sold on arcbound creatures in Commander, but I felt it necessary to give them a try.

Arcbound creatures love counter generation, so I’ve included some of the best.

The machine needs grist for the mill. Here’s where my addled brain went.

Finally we have ways, other than Bosh, of killing our opponents. 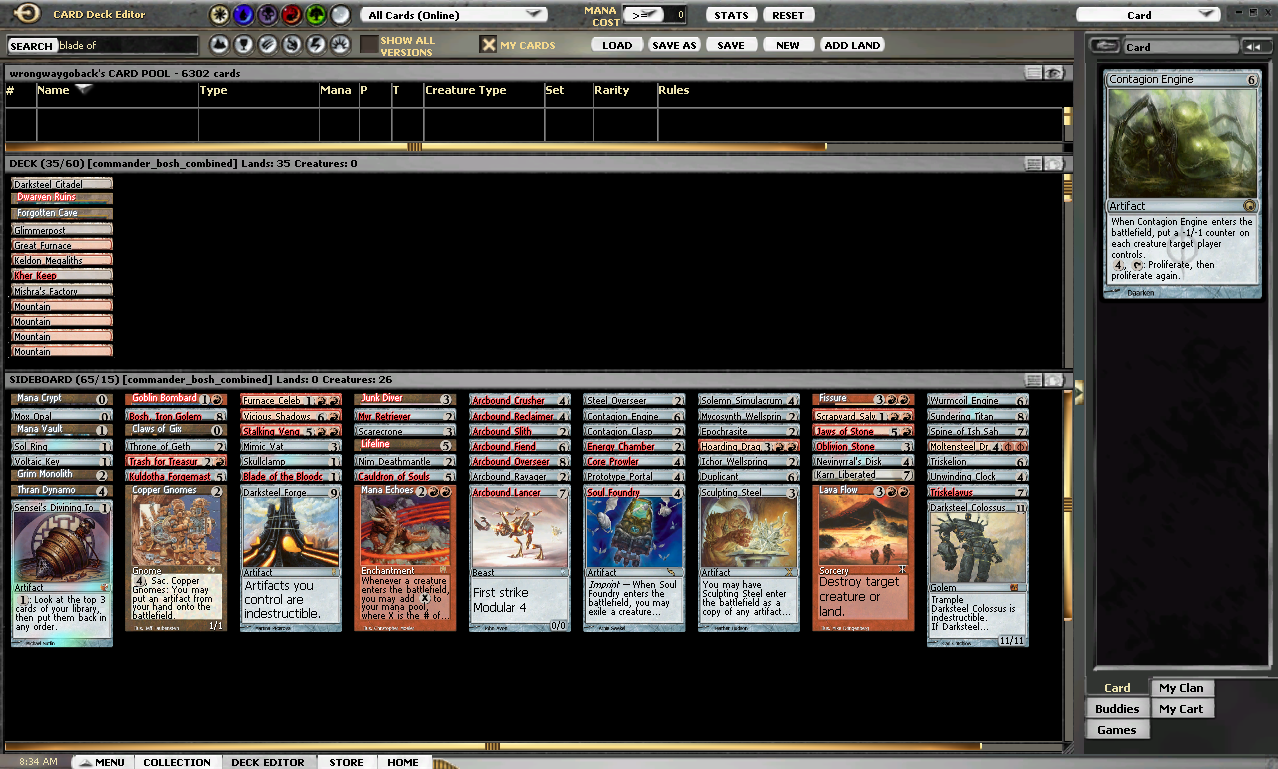 I took the deck out for three spins in the Magic Online multiplayer room. Here's how they went.

The first game was against Momir Vig, Simic Visionary and Mayael the Anima. 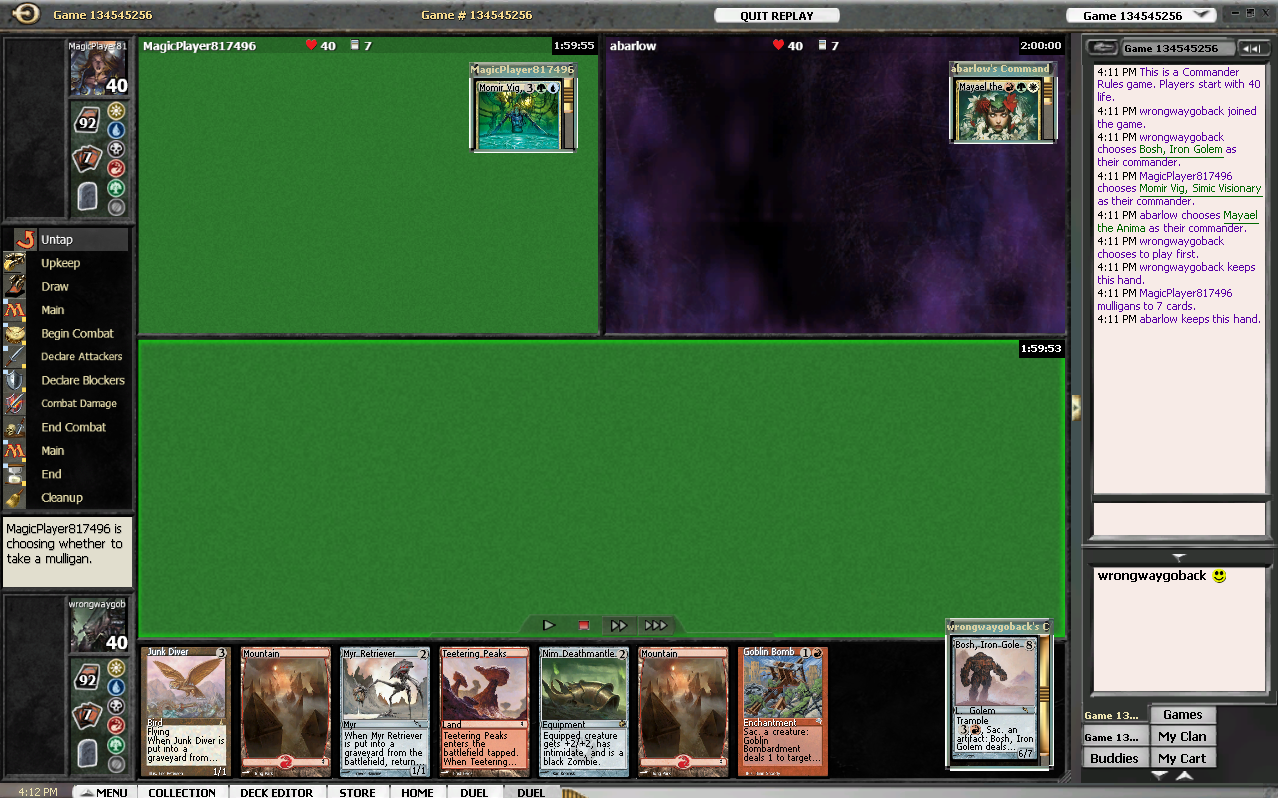 I had a great start with a small combo going on and playing the beatdown role, getting through for four a turn using a combination of Myr Retriever, Goblin Bombardment and Nim Deathmantle. 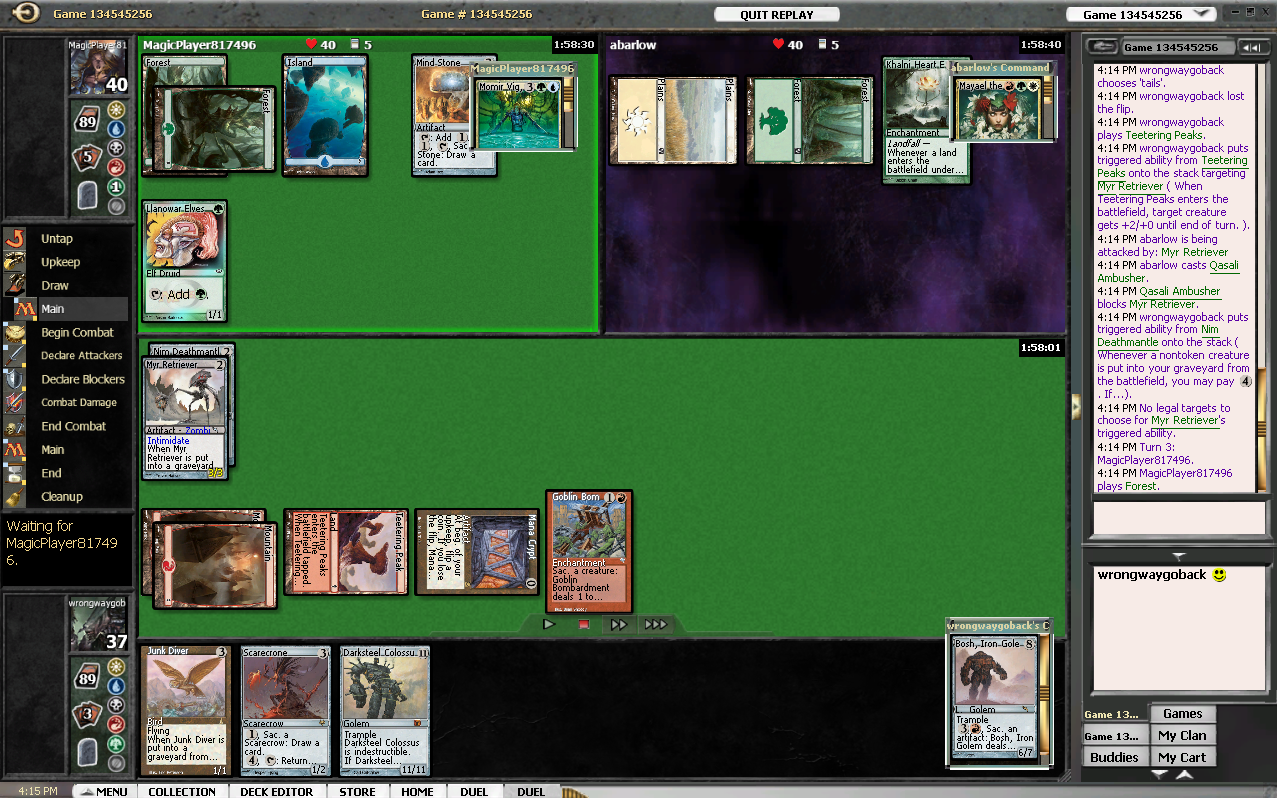 Unfortunately, the Mayael player dropped out fairly quickly, leaving me with the light beatdown and no disruption to stop the Momir Vig player shuffling up some great creatures, and he quickly ramped into a Seedborn Muse, then Teferi, Mage of Zhalfir. I'm pretty sure I misplayed this game, and should of tried to play out more permanents than relying on the tiny combo I had going, possibly going for Karn Liberated, but I recklessly forged ahead on the beatdown/combo path as below. 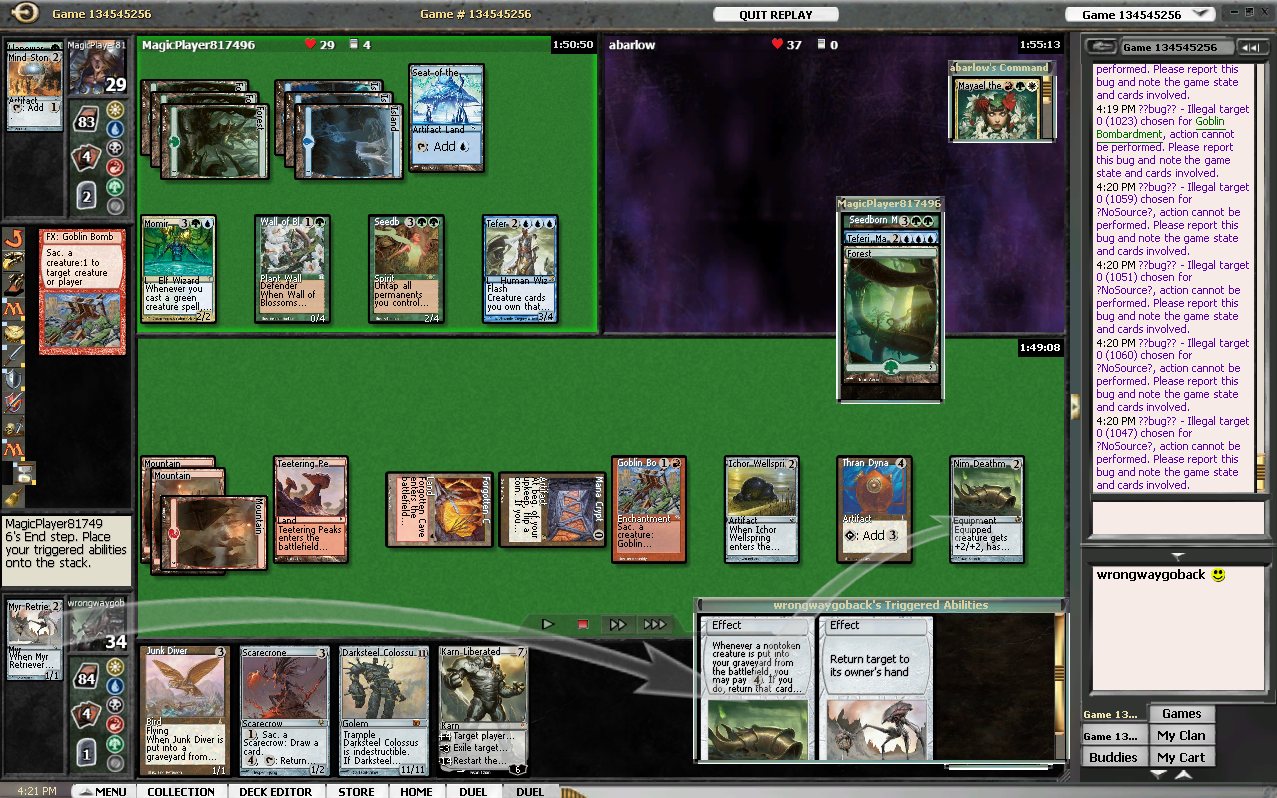 Missing the opportunity to play out Karn cost me, as my opponent layed out a Tidespout Tyrant with counterspell backup, stopping me hard. I ripped a Fissure to kill the Tyrant and delay him a turn, but a Body Double on his next play saw the Tyrant come back and my permanents slowly but surely disappear off the board.

The second game was much more fun, so naturally Magic Online decided to keep no record of it. There was myself, a Kemba, Kha Regent player, a Horde of Notions player, and a fourth who dropped quickly didn't affect the outcome.

I mulliganed into a two land hand (a recurring theme) and the Horde player mulled to five with onw land, complaining bitterly, but as a good sport decided to stick with it. What happened then was one of the most astounding land-ripping streaks I've ever seen, with the Horde player laying down a green source turn 2 followed by a Khalni Heart Expedition, then a Cabal Coffers, and soon a Primeval Titan fetching a Vesuva and a Urborg, Tomb of Yawgmoth for an astounding amount of mana.

The only thing keeping him down was the Kemba player, who had suited their General up with a Pennon Blade and a Whispersilk Cloak, then laid down a wicked White Sun's Zenith for many kitties. I top-decked a Nevinyrral's Disk.

I popped down Bosh, he played out Kemba again, and then the war of attrition began. However, I ripped three key cards; Solemn Simulacrum, Mimic Vat, and Junk Diver. Now a Junk Diver under a Mimic Vat is not a combo, as the Diver needs to hit the graveyard to work. However Sad Robot under a Mimic Vat is perfect for a deck as hungry as this one. Then I hit Unwinding Clock and Skullclamp, and the deck went into overdrive. Drawing two cards and a ramping each turn, providing amazing amounts of cannon fodder for Bosh, and slowly but surely overwhelming the Kemba player.

The four players were Intet, the Dreamer, Ghost Council of Orzhova, and Jenara, Asura of War. I kept a relatively loose hand of two mountains with lots of seven-costed gas, which was a mistake from the start. 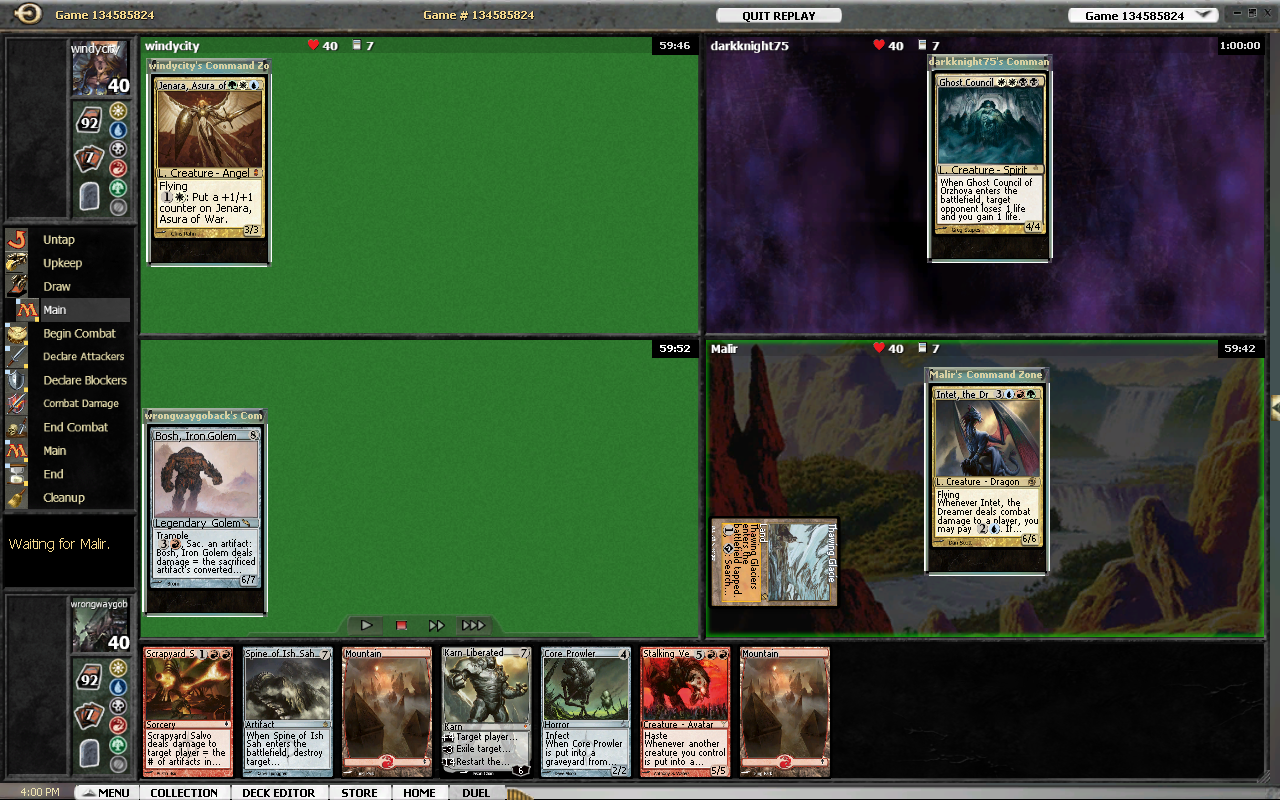 The Intet player gets off to a rocket start, which is almost always trouble because any blue-green based deck with a fast start can be very difficult to reign back. While everyone else merrily ramps away I manage to hit four lands and lay down a pretty useless Core Prowler, loudly telegraphing that I am not playing an infect deck to try to keep the heat off my back. 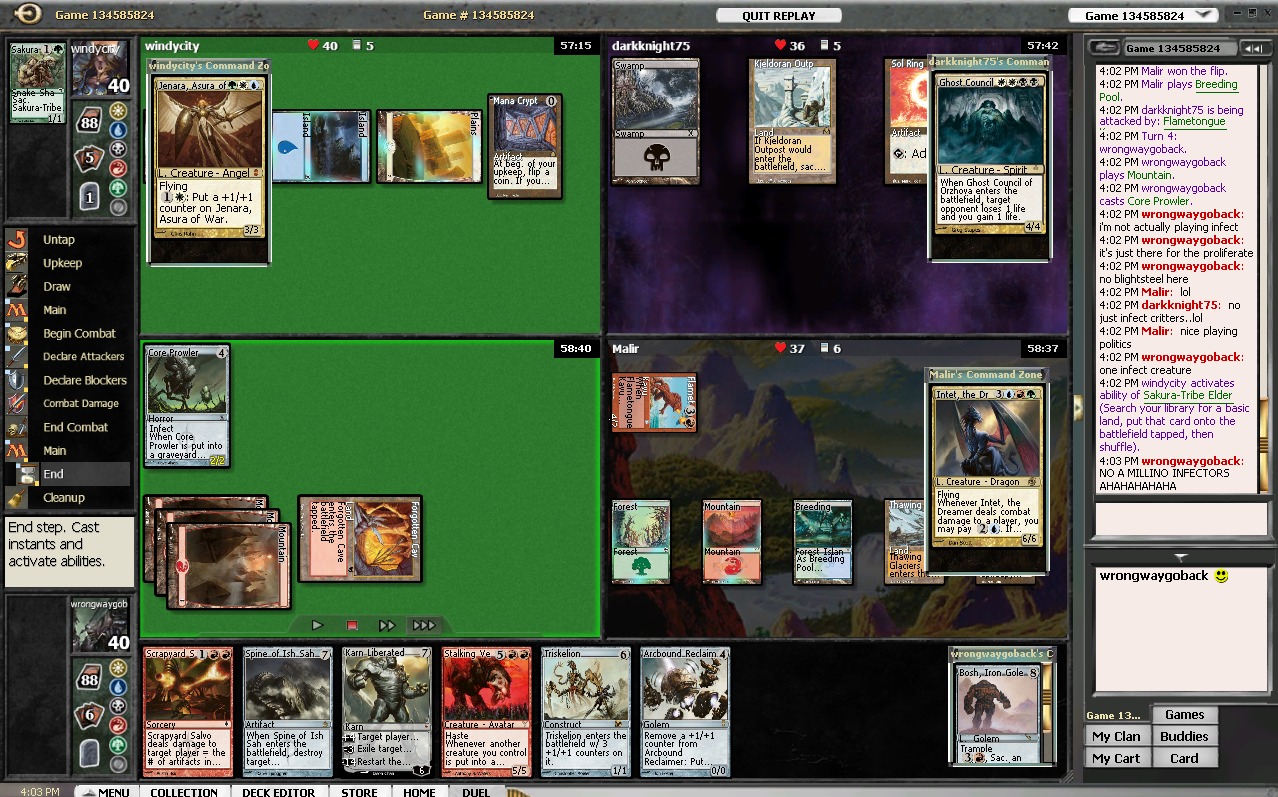 Unfortunately, my replay is corrupted from that point on but  it doesn't matter: the Intet player cheated out a Jin-Gitaxias, Core Auger, drew seven cards (filling up to 14), and left each us in turn without a hand. The game quickly ended from there. I guess there's not much you can do about that.

Ultimately I don't think I've built the deck right. More importantly, I missed the need for some level for land-ramp, and I would probably slim down to two Sacrifice Support slots in order to gain a land-ramp slot. This is a hard task for Red, where you generally have to use things like Wayfarer's Bauble and Journeyer's Kite.

The second thing I'd add is more sweepers. The deck can cope very well in the late game using Bosh's ability as spot removal; it's getting to the late game that's a problem. As such, more Earthquakes and Comet Storms need to make their way back into the removal suite.

I think I'd like to add more planeswalkers to the deck, probably Koth of the Hammer and a Chandra of some description.

I wonder if I thought enough about power level. Surely adding a Goblin Welder and a Kiki-Jiki, Mirror Breaker in there would of pushed the power level up, but they might of been too much of an old trope.

Finally, I really didn't tinker with the mana base much. Some more utility lands, such as Maze of Ith would not have gone astray.
However when the deck came together it was a thing of beauty, an unstoppable force. When the deck failed to ramp it was a timid thing, relying on the comfort of strangers to get it through to the late game.

My question for the readers, as usual, is how would you build the perfect Bosh deck?

I've had a few requests to update the 'best archetypes in Commander' article based on the cards that have come out in New Phyrexia, Commander, and magic 2012 since that time. I plan to do just that. And if you have a deck you'd like tuned, don't forget to drop me a line with a deck list!