First, I want to give a heartfelt thank you to Tyler for covering me last week. I spent a full five nights in the hospital with my wife and newborn. Any attempts at an article would have been poorly thrown together and likely full of content with no value. Now I am home with baby Landon and my wife, and things are slowly stabilizing yet again.

Having a child changes my perspective of many things. I promised myself that one sacrifice I was not willing to make was in Magic. I vowed to maintain this as my only hobby for the next trying year or two. It has grown to be a significant part of who I am, and I couldn’t imagine giving it up.

So with that I begin my next article, still partially inspired by my son.

Many Years Ago – An Anecdote 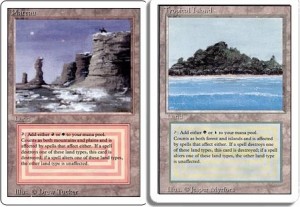 I still remember the first dual lands I ever purchased. I bought a Plateau and a Tropical Island for about $12 each.

Sounds like a great deal, right? Well this was back in 1997, so the deal was not as phenomenal as your initial impression. Still, it was an exciting purchase for me because it was the largest Magic purchase I had ever made.

When I got home I was enthusiastic to play with my now most valuable cards! But I quickly realized something. These cards were just lands that produced mana! They wouldn’t bash my opponent for six like Craw Wurm, nor would they deal any direct damage like Fireball. Worst of all, I had to play a Blue/Green deck or a Red/White deck to even use these cards?! What a poor purchase.

Needless to say, these two cards didn’t remain in my collection for long. (Darn!)

When my son grows a little older, he will most certainly be exposed to the world of Magic: the Gathering. He has a tremendous advantage in having a father who can guide him along the way. When my friends and I started playing, we had no one to advise us on which cards were powerful and which were most valuable. We believed in the fallacy that Dark Banishing was the ultimate removal spell and Scaled Wurm the ultimate creature. Until, that is, we discovered Lord of the Pit which was immune to the former! 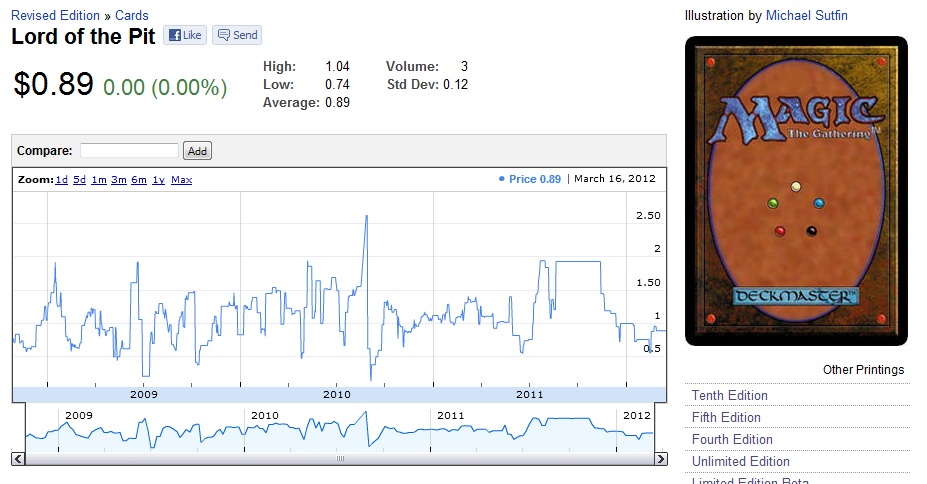 (Chart courtesy of blacklotusproject.com. Disclaimer: the writer does not own any Lord of the Pits for investment)

I now realize how powerful and valuable Dual Lands are. Thanks to the Legacy boom largely driven by Star City Games, the Dual Lands have multiplied in value several times. Other staples such as Wasteland and Force of Will have likewise shot up in price. 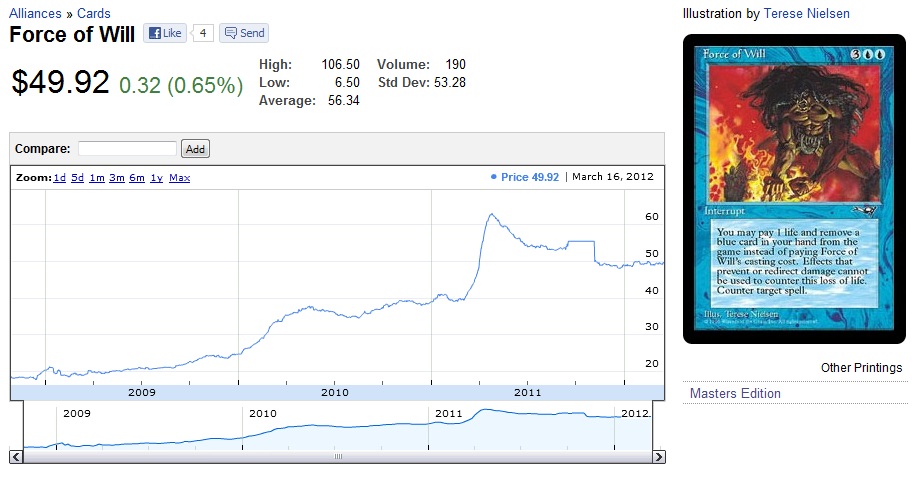 I managed to obtain all the Legacy staples I was most interested in shortly before the cards hit their peak. Now I am sitting on a sizable Legacy collection and I have a moral dilemma in front of me.

Now that I have a child there is no way I will be able to get my money’s worth from playing these Legacy cards. I simply cannot play frequently enough nor can I travel to larger events. I have begun to question whether I need to have a collection of Legacy staples at all, since they simply sit in a binder within my closet for months at a time.

While the birth of my son was a primary trigger that causes me to reconsider necessity of my collection, there is an array of other external factors which also drive me to this consideration.

First, I have observed that conversation on The Source, Legacy’s major forum, has dwindled somewhat. There are more posts discussing cards getting stolen, players getting banned and artworks getting altered than there are discussing Legacy strategy. Is this an indicator that focus is shifting away from Legacy?

The second observation I’ve made is that the Star City Games Legacy opens seem to have become uninteresting. When I began playing Legacy there was a vastly diverse metagame. I could play a deck with mostly lands, mostly enchantments, mostly instants/sorceries, or mostly creatures. 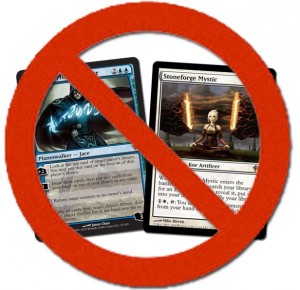 Now, it feels like recent printings have warped the format in such a way that diversity is lacking. Cards like Stoneforge Mystic, Jace, the Mind Sculptor, and Batterskull have left a recent scar on Standard and thus leave a sour taste in my mouth when I see them so heavily played in Legacy. It almost feels like Legacy has become Standard with Dual Lands and Force of Will rather than its own unique format.
(Picture courtesy of thegamerssanctuary.blogspot.com)

The final external factor which causes me to question keeping my Legacy collection lies in the youngest format: Modern.

A light version of Eternal, this format promises a widely diverse format reminiscent of old Legacy. While Legacy feels like a stronger Standard, it’s ironically Modern that fills the void of a diverse Eternal metagame. The result is an immensely popular format – one where I’d prefer to spend my time and money to be honest.

Legacy is not as alluring as it once was. I, like many, have come to this fateful conclusion. So what should I do with all my cards?

If this were the stock market, this would be a no-brainer. I have made a significant return on my investment in Legacy, and now I feel the card prices have stagnated. I should sell out of these cards and move into something with larger upside, such as Modern.

But emotions do exist and they play a role here. It took me a couple years to assemble my set of 40 Dual Lands – do I want to give them up so quickly? What if Legacy rises in popularity again? Isn’t Underground Sea one of the safest MTG investments one could make?

I could keep only cards for one Legacy deck and sell the rest. But this seems noncommittal to me. I’m in or I’m out – I do not want to straddle the fence here. All it takes is one new card or one banning and the deck I chose could go to the wayside.

Finally, I could sell everything and play a low-budget deck such as Burn. While uninteresting, this option would enable me to play in Legacy tournaments competitively while banking all the profits I’ve made from my initial Legacy investment.

Clearly, I am distraught with this decision. Having all these cards is exhilarating and I love browsing through my binder of Legacy staples. But looking at these cards on occasion simply is not sufficient to motivate me to keep this collection. Opportunity costs here are immense. I could invest in other formats, obtain the holy grail of cards, Black Lotus, or even use the money elsewhere in my life. 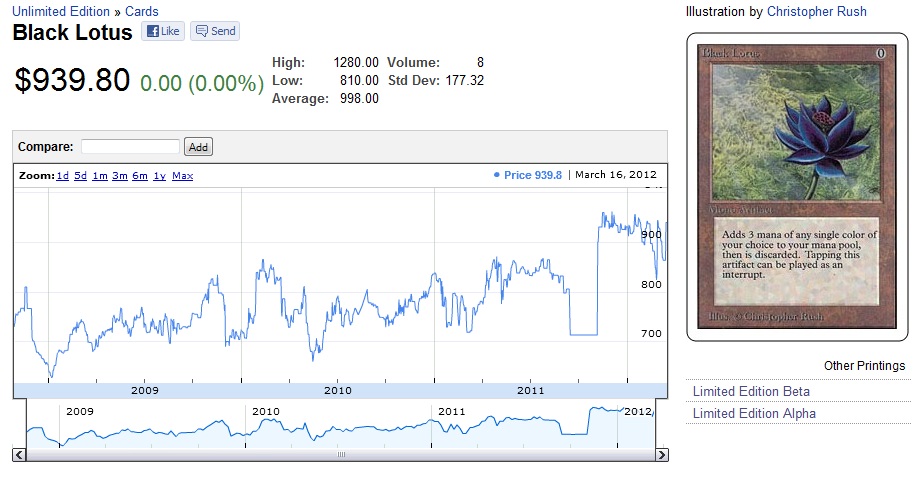 I petition the readers for some guidance here. Considering the information I’ve provided above and keeping in mind the context of my current situation, what would you suggest? I would greatly appreciate the suggestions!

8 thoughts on “Insider: What Is the Fate of Legacy?”