I didn’t think so.

Why does this matter? Well, if you haven’t noticed, the vast majority of Magic players aren’t economists. They look at a card and its playability and immediately link it to its price. What they don’t understand is that playability is just one of a myriad of factors that affect a card’s market price.

Let’s take a recent example to illustrate the point — the fastlands from Scars of Mirrodin (Seachrome Coast and friends). Just a year ago we were trading these away at $3-4 a pop; now they’re pushing all the way up to $15 or $20.

Why is that? Most people will point you towards a few reasons. They’re the best at what they do in Standard. They’ve proven to be Modern-playable. [INSERT DECK NAME] is the best deck this weekend.

And, while they’re not necessarily wrong, I point you to another reason.

The Magic: The Gathering player base has doubled in the last two years.

While Wizards doesn’t release exact numbers on this sort of thing, I’ve talked to enough people whose business it is to know that since Zendikar, there’s been a 100% increase in people playing Magic, with a sizable portion of those new players coming in with Innistrad. We have further evidence of this from director of Magic Aaron Forsythe, who confirmed that Innistrad is the best-selling Magic set of all time.

So what does this have to do with us finding our playset of Seachrome Coasts? In short, it’s the most basic tenet of supply and demand theory. The amount of Coasts on the market is just vastly inferior to the sheer numbers of new players who need it but haven’t cracked a pack of Scars in their lives. That’s how you end up paying $20 for Darkslick Shores.

This principle is also why sets as a whole come down in price after prerelease weekend. As the number of copies on the market increases and demand decreases, prices come down unless there is a factor that causes increased or renewed demand, such as what happened with Geralfs Messenger, a card I advised picking up at the $4 pre-sale price and subsequently jumped to $10 when Zombies broke out a few weeks later.

I realize this information may sound elementary to some of you, but it’s important to spell out this principle before moving into the next section.

Everything old is new again

I referenced Dark Ascension in the title of this article, and I plan to go into detail in a few moments. But first we need to take a trip back in time to a world where Putrid Leech was king and our buddy Jace, the Mind Sculptor was new.

When Worldwake was released, people initially didn’t understand just how absurd Jace was, since Bloodbraid Elf into Blightning kept the big guy in check. The ZZW draft format wasn’t the most exciting ever, and packs of Worldwake weren’t cracked nearly as much as Zendikar packs were.

Fast forward six months. People drafted the hell out of Rise of the Eldrazi and Standard was rotating. Soon Valakut decks were destroying Standard until our man Jace and unlikely buddies Stoneforge Mystic and some birds became the solution that quickly turned into the problem. Demand for Jace and Stoneforge Mystic skyrocketed, and Stoneforge set the then-ceiling (until Snapcaster Mage came along) for a rare in the post-Mythic era at $20-22.

While $20 Stoneforges weren’t enjoyable, it had nothing on $100 Jaces. We all know the ending to this story, with both cards getting the axe in Standard, but it’s easy to forget about just what caused these prices to go as high as they did because it was easy to point out why they were so expensive. They’re the best at what they do in Standard. They’ve proven to be Extended and Legacy-playable. CawBlade is the best deck this weekend. 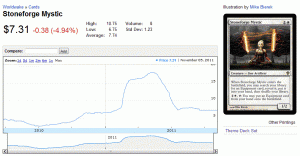 Which brings us back to Dark Ascension.

Why this matters NOW

Even if I didn’t just spell them out, the comparisons between Worldwake and Dark Ascension should be obvious. Each will opened for three months one pack at a time in draft and then fall off the face of the Earth when the third set comes out. Each set had one chase Mythic (Jace and Sorin, Lord of Innistrad), with a lower number of exciting rares when it was released.

Anecdotal evidence suggests that the number of Dark Ascension boxes ordered was down significantly compared to Innistrad. People complained that there wasn’t any reason to order boxes, and though this problem was alleviated somewhat when Huntmaster broke out at the Pro Tour (which I also called the week prior), the number of boxes sold around the time of the prerelease, when demand is at its highest, was down.

This has created a perfect storm, and one we can use to our advantage in the next few weeks.

I’ve touched on most of these at some point in the past, but now that we’re deeper into the set it’s time to revisit the subject. In about three weeks Avacyn Restored is going to hit your Local Game Store and we will all be enamored with the Helvault and subsequently forget all about Dark Ascension and its playable cards.

That is why we must act now, before we start to see the supply begin to dry up in trade binders and before prices begin to creep up. Using purely substantiated and historical evidence, it’s not a stretch at all to conclude that prices from Dark Ascension are at their lowest, and this is a short list of the cards I’m stocking up on now in preparation for the next year and a half of Dark Ascension’s run through Standard.

Mythics as a whole

Remember Mythics like Dragonmaster Outcast, which never even saw a hint of Constructed play, are sold out at $6 on SCG, and seven of the 10 Mythics from Worldwake are at least $2.50 on SCG, which means most of them will fetch a dollar or two from a dealer. Looking at Dark Ascension, now is the time to target cards like Mikaeus, the Unhallowed, Beguiler of Wills, Elbrus, the Binding Blade and Moonveil Dragon as throw-ins while they’re basically free in trade. While it’s unlikely any of these will break out somewhere and explode in value, they are an easy way to start picking up a few bucks in “free” dealer bait with the goal of cashing out in a year or two.

I’m particularly fond of Increasing Confusion, which has the mill pedigree behind it (just look at Mind Funeral’s price), and will stay popular casually forever. People literally give these away now, and that won’t stay true forever. Even Archive Trap, which was from a large set, will move to dealers at a dollar, which adds up when you can get dozens of Increasing Confusions thrown in over the next month.

This is one of my favorite speculation targets at the moment. She sells for $5 on SCG right now, but you can get her at $3-4 in trade, which won’t last too much longer. She’s found a home in nearly every format and will eventually break out in Standard, even if it’s not until after rotation. I fully expect to be able to double up Thalia in a year or so.

Geists has been on-again, off-again great in Standard, and after rotation that could definitely move to strictly “on-again.” Don’t overpay for these, but start to hoard them if you can.

The world caught on and these rightly hit $10. Zombies has fallen off in the last few weeks, but I think we can safely assume they’ll be back with a vengeance come rotation if not sooner. Again, I don’t like overpaying on current market value here, but there’s very little risk in hoarding these since they will always trade well and could be $15-20 without much of a problem. Also not a bad idea to grab Zombie Apocalypse at 10 cents apiece.

This guy is all over block, and holds the distinction of being another card I called during Prerelease weekend (I've been on a roll with DKA callshots). The initial price jump is behind us, but if he is as prevalent in Standard as he was in Block pre-bannings he’ll easily jumped past $5 and move closer to $7-10.

My 94 Splinterfrights and I want self-mill to become a real thing in Standard one day (and it could happen), but if nothing else these cards trade well since casual players love to Fling them some Ghoultree.

This already randomly shows up on buylists for a dollar, and that is already enough of a reason to get them for free.

Vault of the Archangel

Get in on this now at a buck or two in trade. It is an EDH thing and will probably be even more of a Standard thing, which means this will settle around $4-5 in a year.

I’ve talked before about the Uncommon cycle of “beast lords,” which includes the three captains and Immerwolf. Also you should obviously be grabbing every Lingering Souls in existence, since the card is insane across almost every format and will easily sell to dealers for up to two bucks in a year. This is definitely the Inquisition of Kozilek of the set.

Strangleroot Geist is also a very safe hold, though it was also a 4-of in an event deck.

Foils commons/Uncommons to look out for

As always, thanks for reading,