Last week, I wrote about my experiences getting into Legacy. I wanted to say thanks to everyone who supported the article. I hope you all found it interesting and inspiring. I plan to write more about Eternal and my experiences in the future.

Today I'm going to discuss a Legacy deck that hasn't received much attention and attempt to port it to Modern.

A while ago, Sam Black wrote an article on Star City about Legacy Zombies, but it seems that no one really noticed. I thought the deck looked amazing and have been working on it for a bit:

By now those of you who read my articles are probably aware of my love for rogue strategies. Attacking a format from an unexpected angle is always so awesome. When players aren't familiar with your deck they are more likely to misplay and sideboard incorrectly. I enjoy rogue decks so much because every round my opponents are lost and confused.

If you've paid much attention to Legacy recently, you'll notice this deck is unlike other Legacy decks.

There are certainly many powerful decks in Legacy and I'm not saying this deck will break the format or anything. However, it is competitive and one of the more affordable decks out there.

Lets examine a few components of the Zombies deck to get an idea of its game plan and relative strengths. 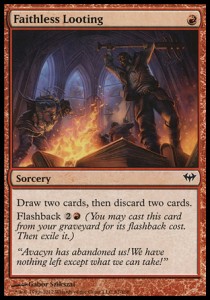 Legacy Zombies seeks to disrupt opponents by messing with cards in their hand. This goal is accomplished with Thoughtseize, Inquisition of Kozilek, Cabal Therapy and Hymn to Tourach, a suite of fully eleven discard spells that make your opponents' life uncomfortable. These cards are extremely powerful and relevant in almost every matchup.

Aggro-control strategies are popular in Legacy right now, and they have a tough time dealing with recurring threats. Bloodghast and Gravecrawler both come back from your graveyard over and over. Swords to Plowshares and Path to Exile do answer them permanently, but your deck also has a few sacrifice effects to prevent this. You also have access to the ubiquitous Lingering Souls, which rarely trades one-for-one against opposing removal.

To make draws more consistent, Zombies utilizes a card that the Magic community is just beginning to understand. This deck is set up to maximize the power of Faithless Looting, which basically reads "R: Draw two cards." Between Bloodghast, Gravecrawler and a host of flashback spells, its not hard to get value off your lootings. Even in it's less-busted version, it still lets you pitch unneeded lands or spells to craft the perfect hand. 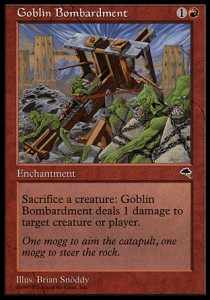 Zombies functions like an aggro-combo deck, similar to Ravager Affinity or Dredge. These decks can attack simultaneously from different axes, which puts your opponent in an difficult position.

When Affinity was in Standard, for example, its adversaries had to answer not only fast aggressive creatures, but also the ever-looming Disciple of the Vault. Deal with the initial rush and you may succumb to the combo finish.

The same thing is true about our Zombie deck here. Goblin Bombardment can singlehandedly end the game outside the combat step. Carion Feeder can also grow to enormous proportions and start to abyss them every turn.

This deck has lots of little intricacies that betray the brilliance of its design. If you manage resources effectively you will usually have the reach you need to vanquish an opponent in the late game.

For example, always remember to sacrifice your Bloodghast before playing a land for the turn. If you have extra mana, you will want to sink it into a couple Gravecrawler sacrifices.

While I was working on this deck, one of my first thoughts was to port it to Modern. Most of the cards are legal in Modern and it shouldn't be hard to adequately replace the ones that aren't.

The most important loss, believe it or not, is Carrion Feeder. This innocent-looking one drop is actually a core piece of the deck. Its a sacrifice engine and an enormous threat. Its also a zombie for your Gravecrawlers.

While I did eventually find a replacement, this was easily the biggest loss of power in the Modern version.

As I said above, the deck is nearly identical. Mortician Beetle was the best replacement I could find for Carrion Feeder. The beetle can get huge like its predecessor, but it requires a separate sacrifice outlet. The one benefit is that, unlike Carrion Feeder, the beetle still gets counters when you sacrifice things to Viscera Seer or Blasting Station.

One card that has synergy with our new beetle friend but didn't make the cut is Gatekeeper of Malakir. This removal spell on legs can kill a lot of tenacious threats while growing your beetles. It may eventually make an appearance in the maindeck or sideboard.

I lowered the amount of hand disruption as well. Rise//Fall is significantly worse than Hymn to Tourach and I need to do more testing with it to see if it really belongs. I do not like the variance associated with the card. If they randomly reveal two lands they avoid discarding entirely and you're down two mana and a card. Right now, I'm running a split of two Rise//Fall and two Lightning Bolt. Depending on what the format looks like next PTQ season, I could see a lot of different things in this spot.

Just like the Legacy version, this deck has the consistency and resilience to be a real player in Modern. I'm not completely settled on the card choices and numbers, but that will get settled over time.

Over the next couple weeks, Standard is going to heat up with changes from the new set. I am excited to see what happens and eagerly await the changes to a stale format. There will be a lot of brewing on my end, so hopefully I can find some cool strategies to share with you here.

Unleash the Force on those eternal formats!