A lot of players regard Legacy as the best format in Magic, while many others see it as a dream world completely inaccessible to the masses.

Legacy advocates tend to be long-time players who underestimate how hard it is to acquire the cards necessary to play the format. The truth is that Legacy is a difficult format to break into. This difficulty increases the more recently a player began playing.

Legacy does not, however, have to be as daunting as it may appear. There are strategies that you can employ to get in without breaking the bank or your sanity. With this article I hope to provide valuable information for newer players interested in Legacy who are struggling to break through the fog.

I’ll start with the tale of my own path to Legacy.

I learned Magic in college while Scourge was the newest set and rapidly found myself immersed in its wonderful world. My competitive nature drove me to seek more than casual play and before I knew it I was enjoying some early success at prereleases and Standard tournaments. But it was the Friday night tournaments that pulled me farther into the game.

Friday, you see, was Vintage night at the local shop. Note that when I say “Vintage,” I do not mean the kind of card pool you may see at GenCon Vintage Champs. I refer rather to a haphazard collection of random cards from every era of Magic. Although we followed the official Vintage rules, most players did not own any of the Power Nine or other format pillars. These events sported everything from solid Eternal strategies like High Tide to terrible Standard decks. You could never predict what would crop up week to week.

My play group started amassing an enormous collection of older cards. Many of us had play sets of dual lands, [card Force of Will]Force of Wills[/card], Onslaught fetch lands, and a slew of other cards. Back then these cards were cheap. Most of my dual lands cost me about ten dollars each and I traded for my fetches at two or three dollars each before anyone knew they were good. Let’s just say the barrier to entry in Eternal formats was a mite lower in those days.

Unfortunately, my story isn’t all about my cake and how I got to eat it. A few years later life happened and I decided to sell my collection. All I kept were a few Standard cards that weren’t rotating for a while. It wasn’t until two years ago that I began to regret that decision.

Around this time I began to play Magic a lot again, after spurts of high and low levels of involvement. When I befriended some regular Legacy players, I decided it was about time to acquire some older cards again. 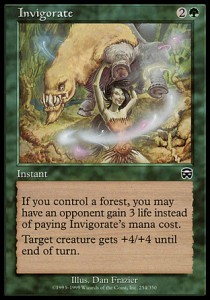 Luckily, I had never sold my favorite “Legacy” deck from before, since it wasn’t worth anything at the time (and still isn’t). The deck? Nine Land Green, better known as “Nine Land Stompy.”

In case it wasn’t obvious from the name, the deck only plays nine lands. It can kill remarkably fast with its bevy of [card Rogue Elephant]Rogue Elephants[/card], the miser’s Wild Nacatl. Back then we had nothing comparable to Wild Nacatl or the new dominant force in Legacy, Delver of Secrets // Insectile Aberration, and Rogue Elephant was the biggest, cheapest creature available.

In any case, when Scars of Mirrodin was released, the Infect mechanic seemed to fit well in Nine Land Green. I rebuilt the deck with black mana and a bunch of underpowered Standard cards.

Nine Land Poison: my formal reintroduction to Legacy. Or so I thought. This deck was short-lived in my repertoire, as I only played it in one event. It was a ton of fun killing people on turn two with Invigorate and Berserk, and this tournament ranks with some of my favorite tournaments ever. But with a record of four wins and four losses it hardly sated my appetite for success.

In light of such results, I moved on to another deck. The deck that intrigued me most was Hypergenesis. Its strategy, reminiscent of Reanimator, consists of cheating in an army of huge monsters as quickly as possible. Any cascade card allows you do play Hyergenesis for free, so an ideal hand lets you slam Emrakul the Aeons Torn into play on turn one.

Unfortunately Force of Will still exists and Hypergenesis is pretty weak to free counterspells. Since I didn’t want to abandon the deck, I ported it to the blue version with Show and Tell and its own [card Force of Will]Force of Wills[/card]. That version is much better and actually a decent competitor in the current environment.

Last year, I decided to kick it up a notch and build a more competitive Legacy deck. When I started building Maverick though, it had just hit the scene and wasn't tier one. I choose to build it because I already owned the following cards:

Can you see what’s going on here? Breaking into Legacy is a gradual process, but a manageable one. Start with a deck you have cards for already. Try borrowing a deck from a friend to get an idea of which play style suits you best. It may take a year or so, but before long you’ll be brainstorming and wastelanding with the best of them.

If you find yourself drawn to Legacy like I did, I encourage you to begin your journey today. I assure you it is worth the investment, and the earlier you start the faster it will pay off.

When I began playing Legacy again, I had some preconceived notions about the format that turned out to be wrong. Realizing these all-too common beliefs were untrue was part of the process of getting acquainted with the format.

So let me take this opportunity to dispel some common myths about Legacy.

Myth 1: Legacy games end on the first three turns of the game.

Lightning-fast combo decks certainly exist in Legacy. There’s a lot of information out there about strategies like Dredge, Storm and Belcher, and it’s true that they’re capable of winning as early as turn one. This is why I believed Infect to be a viable deck and not merely a fun project.

While these decks form part of the metagame, most Legacy games are close to the same length as Standard games. Games in Legacy may play radically differently, but rest assured you will play real Magic like in any other format. I must admit, I still find myself pleasantly surprised by this fact at the Legacy events I attend.

Myth 2: Force of Will will destroy everthing you ever try to do.

Initially I was worried about the [card Force of Will]ubiquitous free counterspell[/card] invalidating deck upon deck. While it does do a number on the combo decks I mentioned (which is why they don’t always dominate tournaments), it does not decide as many matches as I thought it would. Often, two-for-oneing yourself to counter something is a significant handicap. Sometimes its not even correct to pitch your last blue card to Force of Will at all.

Myth 3: There are only a few viable tier-one options.

You may notice certain archetypes top-eighting time and again, but they are usually accompanied by a bunch of other random archetypes that change week to week. Legacy is actually a wide open meta and a deck the fits your play style is almost certainly waiting somewhere for you to discover it.

Recently I took my latest build of Maverick out for a spin at a local tournament. After a round one draw I took down three close rounds and finished in second place. Here’s what I played:

Maverick has evolved quite a bit since its first appearance. We can see several of those changes here.

The first iteration of the deck ran Stoneforge Mystic to grab a couple different equipment. Recently, the trend has been to remove the tutor and just play the equipment. I think this trend will soon extend to other decks in Legacy as long as the format continues to move towards midrange aggro decks.

The other change I’m on board with is the addition of Thalia, Guardian of Thraben. She seems ridiculously good in Legacy. I cannot think of a matchup where she is bad other than Zoo, and even there she impacts the game by upping the cost of their removal. Againt combo, she is simply their worst nightmare.

I added a couple cards as metagame calls to spice up the deck. They probably deserve a little explanation so I will mention them individually. 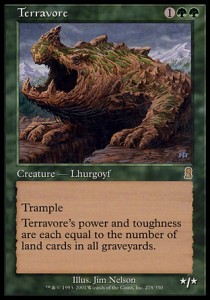 Terravore — I knew from the beginning I was going to play this as a one-of. It is basically the fifth Knight of the Reliquary with one major difference: trample. If the game goes late against other aggro-control decks Terravore trumps everything. He’s absolutely gigantic (remember he counts lands in all graveyards) and makes chump blocking useless.

Kitchen Finks — My metagame contains a lot of red decks like Zoo and Mono-Red. This was a call based on what I expected to face. Against any deck trying to attack you, Finks will be solid.

Treetop Village — This land has seen a lot of play over the years and should not be much of a surprise. I like my lands in any format to do more than just tap for mana. Treetop Village gives me a way to search for a creature with Knight of the Reliquary. Including just one manland adds this dimension to the deck.

Gavony Township — If you’ve played with or against Melira Combo in Modern you may have seen the power of this card in action. It may seem like a dumb Standard-only card, but I think its potential is much greater. With Gaeas Cradle you can even activate it early.

The last card I wanted to mention is a relatively new Legacy staple: Scavenging Ooze.

As soon as the Commander decks came out, Scavenging Ooze began appearing in Legacy. He has obvious applications against graveyard strategies and slots perfectly into a deck already running Green Sun's Zenith.

But people are starting to learn that Scavenging Ooze is not just a bullet to search for, but a central part of the deck. He can even outclass the great Tarmogoyf by whittling him down, and he’s less reliant on the graveyard for his large stats. I for one will play three or even four copies of it the next time I play Legacy.

Unleash the Force on Legacy!

7 thoughts on “Breaking Into Legacy”