Over the last couple weeks, I have detailed the process of preparing for a PTQ and written about my performance at the first PTQ I attended this season. Today I bring you another chapter in the annals of my PTQ experiences.

The world of competitive Magic is immensely different from casual Magic. A room filled with a couple hundred players all hoping to qualify for the upcoming Pro Tour is an inspiring and electrifying scene. It can also be intimidating if you let it overcome you. But ultimately you have to remember that it's just another Magic tournament, albeit against a more competitive field.

For my second PTQ this season I played a tier one deck, Esper Spirits, which recently top-eighted Grand Prix Minneapolis. I based this decision on testing results from the night before when I was working on a new Delver list. I made a few changes but nothing dramatic. I arrived at the convention center with more than enough time to write down my deck list and double-check it. I made sure to be well nourished for the event so that I would be able to play at a high level.

Sometimes even all of that is not enough. Sometimes, when you do everything in your power to prepare for an event, you don't draw a third land to play the awesome spells you had in your opening hand. This was the unfortunate outcome of my first round in the PTQ.

I try not to dwell on things that are out of my control. One thing that distinguishes the great players from the average is that they have developed coping skills for situations like this. I did my best to function on two lands, but at some point I ran out of cards to play and I died. I did make a come back by destroying him in game two with Hero of Bladehold. But game three was similar to the first in that I was steamrolled.

Even with a first round loss, I picked myself back up to prepare for the second round. Unfortunately it was to no avail as my opponent's Grixis Control deck with maindeck Curse of Deaths Hold seemed specifically built to beat my version of Delver. I almost beat him game one but I could not get in those last few points of damage before his Grave Titan took over. Game two it took seven turns for me to draw my third land. I managed to make it a close game, but in the end his army of late-game bombs was too much to overcome.

You cannot win every event you play in.

If you play competitive Magic, I’m sure you've been confronted by this fact at some point. Every player 0-2-drops once in a while. The important thing is not to let it wreck you. There is only so much about this game we can control. There's nothing to do but get back up and play again.

After two PTQs, countless hours of watching and reading about the format, and a number of discussions about various decks and matchups, I feel like I finally have a grasp on Standard. Lately I've been applying that information to work on Wolf Run Blue. The deck seemed well received last week and I tried many of your suggestions from the comments. 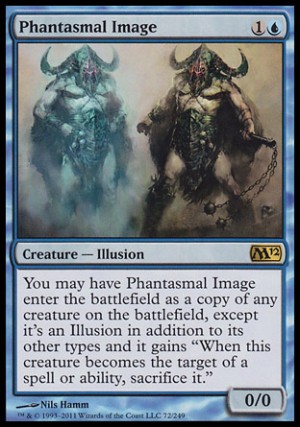 One major idea was to ratchet up the red splash with Huntmaster of the Fells. This proved problematic. Adding the admittedly amazing creature to the deck made the mana base so horrid that I scrapped the idea immediately. I love Huntmaster more than most, but he does not belong in this deck.

Another four-mana creature, Solemn Simulacrum, was also suggested as a possible inclusion. After much consideration, I think it's the best solution. He ramps you to titan mana of course, but his key feature is ‘blocks well.’ Being able to block any ground creature with a sword is a relevant attribute. Netting you a card is a huge benefit as well.

The other card I settled on has seen plenty of play, but not typically in ramp decks.

Phantasmal Image is one of the best creatures in Standard right now. Killing Geist of Saint Traft is no easy feat and Image takes care of that problem neatly. Another cause for concern is Strangleroot Geist and Image pairs up well against him too.

Phantasmal Image gears Wolf Run Blue to beat the major decks in the format and it's never a dead draw. If your opponent doesn't give you anything relevant to copy, you can always defer to the old standby of cloning your own titan.

Making room for these cards was not hard, as parts of the deck were underperforming. I was most unhappy with Trackers Instinct. Initially I loved this card because it found more titans, but I hadn't realized how often it would whiff. This occurred far too frequently to justify continuing to play Instincts. I also cut Dungeon Geists and Garruk Relentless, which were acceptable but not amazing.

I came back to this deck after testing so many others because it pairs up well against the major decks. It's still fundamentally a titan ramp deck, already proven as a tier one strategy.

One difference is that in the Delver matchup Wolf Run Blue has more tools against Restoration Angel, the current bane of Wolf Run decks. Use Vapor Snag to delay some damage, copy it with Phantasmal Image or keep it tapped with Frost Titan. If all that fails, you can always gain life with Primeval Titan plus Glimmerpost.

Post board Delver basically turns into U/W Control. I think Wolf Run Blue has an advantage there as well. Keeping Mana Leak in post board prevents them from blowing you out with spells like Consecrated Sphinx. I even added a main deck Alchemist's Refuge as my twenty-fifth land as extra frustration for control opponents.

Aside on the Dominance of Delver

If you look at the top decks from the Star City 5k in Nashville, Delver is the main concern as it took the top six spots at the event. This led me to question whether or not Delver needs to be banned. The short answer is probably, but I don't think it will because of the impending release of Magic 2013 in July.

Sooner or later though, I think we'll have to consider what another year with the flying Wild Nacatl will look like. When a creature breaks the barrier of entry to eternal formats, it's a good idea to ask whether it belongs in Standard. It does seem like Standard would be a better format without Delver of Secrets, but that discussion will have to wait for another day.

The bad matchups for Wolf Run Blue are mostly decks that see little to no play. Both Mono-Green and B/W Tokens can be quite difficult for this deck to deal with. Mono-Green has Dungrove Elder, which this deck can't interact with and the B/W Tokens matchup is hurt by our utter lack of a sweeper. Both strategies attack from an angle this deck is ill-prepared to defend against. 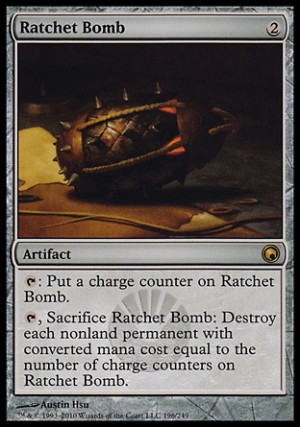 We do have a few sideboard options to mitigate this problem.

Ratchet Bomb helps dramatically with the tokens matchup as well as in other areas. I also board in Surgical Extraction to deal with Lingering Souls post-board.

As for Mono-Green, I added a second Batterskull to combat the aggressive matchups. Naturalize usually comes in as well.

I have not played against any reanimator decks but they are one reason I continue to include Surgical Extraction in my sideboard. Decks like Frites and Solar Flare pose a problem because they can make game-breaking plays before you are prepared to handle them. Vapor Snag also helps here by slowing down their fastest draws.

I like this deck a lot because every matchup is winnable. This is one of those decks that seems like it has 50-50 matchups across the board but they are actually favorable because your opponent doesn’t know what to expect.

If you like Wolf Run but haven't had much success recently because of its place in the metagame, I would recommend trying the blue version.

This weekend is the Star City 5K at Origins. I will be there, most likely with Wolf Run Blue. If you are at the event, feel free to stop over and say hi. I always have trade binders and I would love to meet some readers and see the sweet decks you've cooked up.

Wish me luck and tune in next week to hear how it went.

4 thoughts on “Adventures in Qualifying — PTQ #2”