Welcome to the final article in my series on budget monocolored decks. Our target today is the oft-maligned color blue.

By now it should be no secret that I wasn't looking forward to this article. I hate the impact blue has in Commander. Its true that library manipulation and card drawing make it a great support color for decks trying to do interesting things. But the countermagic and combos make it a miserable color unto itself.

At this point, I've tried a few times to build a proactive blue deck, and it is possible. You have to limit the number of counterspells, combo pieces and card draw engines you play, lest the deck devolve into the generic strategy of valuing everyone to death.

The thing is, there are very few blue Commanders that lend themselves to aggression. Sakashima the Impostor does an okay job, depending on how aggressive the rest of the table is, and Hakim, Loreweaver is okay if you're willing to go all in on auras. But both seem gimmicky and likely to get old sooner rather than later.

That said, the mantra of this series has been that budget decks thrive on gimmicks that let them focus on accomplishing one thing as consistently and powerfully as possible. So I guess we should run with one of these two...

What's that? New legends in M13 you say? Well, let's check those out and see if there's something a little more exciting: 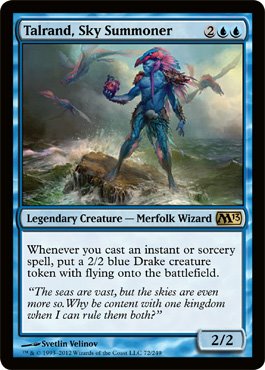 This guy seems more interesting. He proactively develops the board and kills players directly rather than messing around and drawing a billion cards. He's on the cheap side, something not many popular blue Commanders can claim. He's more flexible than Hakim, and more gimmicky than Sakashima, but encourages you to play with blue's strongest card types.

I like Talrand because he asks a unique set of questions. How many instants and sorceries can you cast in one turn? How good are cantrips that double as combat tricks? What kind of effects can we find "draw a card" stapled onto, and how much better are those when they come attached to a 2/2 flier?

The short story is that this guy is absolutely insane for budget blue decks. Toss him into any deck with your favorite blue cards and whatever rares you have around, and make up the difference with miscellaneous cantrips. They don't even have to be good cantrips like Preordain. Bring on the [card Portent]Portent[/card]!

The unfortunate thing is that Talrand does not lend himself to building particularly interesting decks under a budgetary constraint. You're going to splurge on a few powerful cards that interact favorably with the rest of your deck, and then pack it to the gills with as many drake producers as possible.

We want to cast as many spells as possible each turn, while still leaving up countermagic to protect Talrand. This means buyback and retrace cards as repeatable drake factories. It also means spells that untap lands or otherwise enable us to cast more spells.

Let's start with the cantrips: 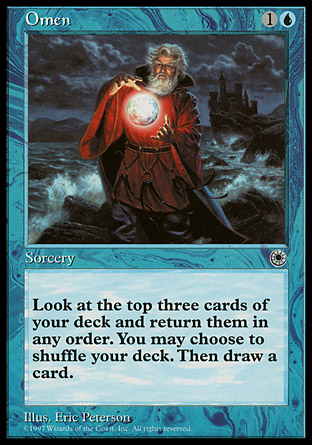 That's thirty-eight cards dedicated to sifting through your deck as cheaply as possible. Throw in some flashback cards like Think Twice for resiliency and some high impact cards like Distant Melody to pull ahead if you start running out of gas, and you're set.

There are a couple things to consider when running this high a density of cantrips. The first is that opening hands will look wonky, full of cards that do nothing but replace themselves (the first time that random Shadow Rift is actually relevant should be hilarious). It also means that the longer a game goes, the more likely you are to flood. You don't have much in the way of card advantage, just selection. 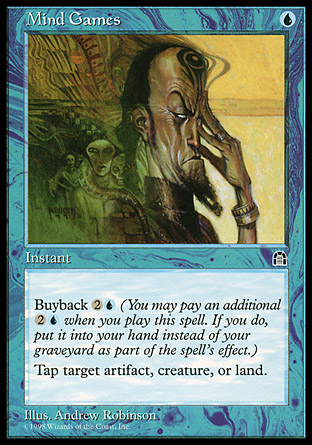 If all we can do is cantrip into more cantrips, it will be hard to actually win the game. That's where the other mechanics I've mentioned come in. Buyback and retrace make sure you always have something to sink mana into and provide a continuous source of 2/2 beaters.

I only found these five cards but each one should be a reasonable mana sink. The worst one is definitely Petals of Insight, which I've had a soft spot for ever since running Petalmane Baku combo in Standard back in the day.

Mind Games seems like the kind of card that dominates games given sufficient mana. You can lock down problematic guys, turn off all of someone's colored sources or tap down blockers, all while generating more fliers. Seems fair, right?

Build Your Own Summoner's Bane

Take a look at this card from Zendikar:

Never having seen the light of day in Constructed, unplayable even in Limited, Summoner's Bane is actually a terrible card. But what if we can turn good counterspells into [card Summoners Bane]Summoner's Banes[/card]? With Talrand we get the upside of efficient counterspells with valuable bonuses and 2/2's on top of it! Suddenly, Summoner's Bane seems a lot more reasonable.

Unfortunately, good counterspells are usually expensive because of the popularity of the color blue. But there are a ton of budget options, many of which appear here. Sure, you can do some great things with Forbid and Cryptic Command, but they aren't necessary. You should be fine as long as you can protect Talrand with stuff like Turn Aside, keep the game from getting out of control, and stop [card Wrath of God]Wrath of Gods[/card].

At this point we should have no trouble blazing through our deck and generating an enormous army of drakes. But a continuous stream of guys will not always be enough to finish the game. We want a few ways to turn our temporary advantage into permanent victory. 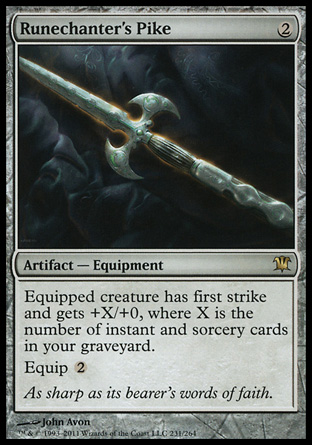 These are the cards you're digging for, the ones that will end the game.

Lunar Mystic seems like a great way to make your counterspells even better. It also turns ordinary cantrips into real card draw to guarantee you don't run out of gas and hit your land drops late into the game.

Sakashima the Impostor is the big splurge for this deck. Doubling up on 2/2's will present lethal very quickly and easily, especially in conjunction with Favorable Winds.

The biggest question is what to do if you can't make enough guys to constitute a reasonable threat. We have a few answers to that problem.

Runechanter's Pike and Diviner's Wand can enable a one-shot kill and help avoid overextending into sweepers. Runechanter's Pike is especially powerful considering how little esteem it enjoys. This unassuming equipment has made the cut in most blue decks I've worked on since the release of Innistrad!

Artful Dodge is mostly there as a way to force through huge hits with one of your two equipment, but can also make a few guys in a pinch.

Lastly, Laboratory Maniac provides a quirky and fun plan B. You just want to be careful with him when going for the win. Try to trigger him with your draw step or a sorcery speed cantrip, and hold back instant-speed cantrips in case you need to respond to removal.

The density of cantrips in this deck will let us run a low land count. We could try to run some number of mana rocks to incrase the likelihood of turn three Talrand, but given the choice between those and Sakashima, I think Sakashima has a higher upside. Because of that, and since we're already a little above the price I would prefer, our mana will simply be a bunch of basics.

There are definitely a few nonbasic lands to consider, like Buried Ruin or manlands. Even [card Lonely Sandbar]cycling lands[/card] can smooth out your draws and keep the cantrip engine running. The right number of lands might be higher or lower, but it's tough to say without playing a ton of games. Especially in a deck with so many cantrips, you're going to leave yourself open to a ton of variance.

I can't express how excited I am to see what people do with Talrand. This guy rewards you for indulging in typical blue shenanigans, but does so in an interactive way rather than a degenerate way. Finally, blue has an efficient way to make an army that doesn't involve tutoring up Myr Incubator. I'm excited to see what corner case interactions end up defining Talrand decks, because it's going to be sweet!

I'm sure there are ways to upgrade the basic list above. Shuffle effects to go with the cantrips would probably be good. Cryptic Command and other tier-one counterspells would make a huge difference. Other than that I can only think of expensive staples to add, but there are undoubtedly a few gems lurking somewhere in Magic's twenty-year history.

The deck is pretty sweet as is but it will take some tweaking to find out which cards don't work and how many cantrips is enough.

I have Twitter to thank for next week's deck. @Andrew_Magrini was working on a Jund deck with Sek'Kuar, Deathkeeper, and @GUDoug and I started talking about things you could do with Ghave, Guru of Spores. This approach seems right up my alley. There will be so many lands!