My favorite card type in Magic is undoubtedly land. I'll cut just about any spell in my deck to squeeze in one more utility land, because there's nothing I enjoy more than hitting my land drops on time.

One thing I've learned since starting to play more competitive formats is that there is such a thing as too much of a good thing. There is an upward limit on the number of utility lands that you can play before flooding becomes a frequent problem.

I like to think of it as a bell curve. At one end is an incredibly greedy deck with very few lands. It may be inconsistent, but you'll absolutely crush opposition when you draws the right number of lands. At the other end is a deck full of nothing but mana sources. You may hit your land drops every turn, but if that's all you do, you're going to get crushed by people who are casting spells. It's important for most decks to walk the line between these two poles and try to find the sweet spot where you don't get flooded or screwed particularly often.

I love decks that let you break this rule with unnaturally high land counts. So it was incredibly exciting for me to see the deck @Andrew_Magrini was working on a few weeks ago. It was a Jund deck that did some absurd things by animating everyone's lands and crashing in for a billion damage.

I wanted to take this in a more controlling direction, and @GUDoug and I talked quite a bit about what a deck like that would look like with Ghave, Guru of Spores at the helm. The deck we came up with is hilarious and goes way over the top of typical strategies in Commander.

Of Life and Limb

The centerpiece of the deck are land animation effects, both its biggest strength and its biggest weakness. They set up some pretty crazy shenanigans with cards like Skullclamp and Verdant Succession. Everything else is built around these unique effects. 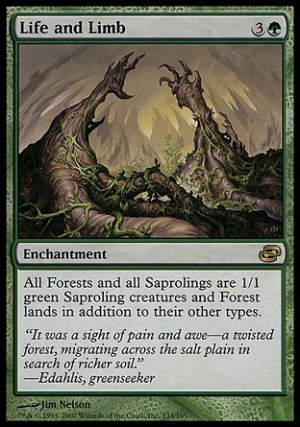 There are a couple different strategies to pursue after animating everyone's lands en masse.

One option is to build an aggressive Jund deck that smashes everyone's face in with stuff like In the Web of War and Shared Animosity. This is a hilarious avenue that can generate lots of damage quickly.

Alternately, you can build a recursion engine that aims to break cards like Planar Birth and Second Sunrise by sacrificing lands for value and rebuying them. After producing a critical mass of card draw and mana, you have merely to decide how to abuse it!

So your lands are creatures. Now what? The first thing you want to be aware of is that lands will have summoning sickness. We're going to include Concordant Crossroads to get around that. You could go even bigger with Akroma's Memorial too, but that's a little out of my budget for now and I haven't gotten a chance to try it yet.

The second thing we can do is encourage opponents to Armageddon themselves by chumping with their lands. Cards like Earth Surge will make our army huge enough for this task.

These things are both great Plan B's, but aren't the main focus of the deck.

What I really want to do is to turn our lands into other resources, like some token decks do after assembling their combo. Fortunately, since our lands will be creatures as well, we can run a good number of the same cards. 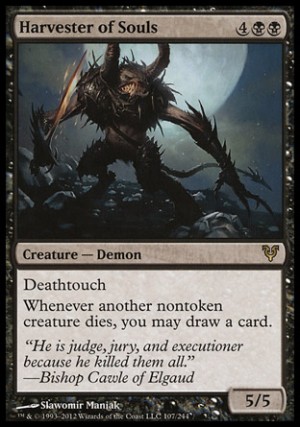 These cards break the symmetry of the Living Lands effects and get you ahead on various resources. Cards, mana, life, and other things once we get a little further. Cards like Harvester of Souls are perfect for this deck, and sure to shine as a piece in our wacky Rube Goldberg machine.

In addition to generating value for us, we can use the animation effects to kill everyone else's lands. These aren't effects that I generally advocate playing, but I think the opportunity here is unique.

I just want to assemble Curse of Death's Hold and Kormus Bell against someone with Urborg, Tomb of Yawgmoth. It may be because I'm vindictive, but I find the idea of [card Armageddon]armageddoning[/card] someone for the rest of the game incredibly amusing. Maybe after pulling it off once or twice I'll be satisfied and be ready to cut the interaction.

So we've animated our lands. We've sacrificed them for value. How can we take it to the next level?

This is where the deck gets crazy, the part that I absolutely love. We get to use one of my favorite cards. Let's go Second Sunrise! 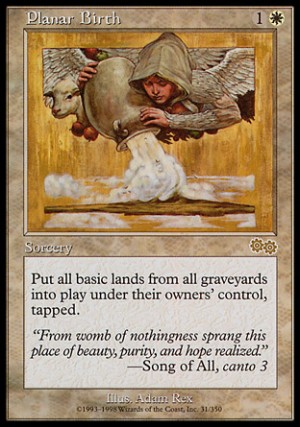 Once we've sacrificed our lands, we want to do it again and again, netting more cards, more mana and more life each time.

There are some narrow pieces here, such as Melira. But I want the density of these effects to be as high as possible so that I can find out what number the deck needs to function. If you're maxed out on animation spells and ways to recur lands and it still isn't enough, then the deck probably isn't going to work.

It's worth mentioning that there's another M13 spoiler in this deck: Faith's Reward. In case you haven't seen it, it is a one-sided Second Sunrise for 3W.

I think this is enough of an engine to get us started, especially since a number of these come close to going infinite on their own, and they interact particularly well together.

Imagine a sequence in which you cast Mikaeus, sacrifice your board, draw a bunch of cards and get your lands back with undying. Then you activate Cauldron of Souls and sacrifice all your lands again. Now they can undie again, and by that point you may have drawn a Second Sunrise, which can reset everything for a third time.

The plan is to dig through the deck and eventually find Eternal Witness. Then every iteration of your combo you sacrifice Eternal Witness, cast Second Sunrise to get back Eternal Witness which itself gets back Second Sunrise. At that point, winning is trivial. We'll wait until we know how many slots in our deck are necessary for the engine before we worry about that.

Drawing all the Cards

The hope here is to add more mechanisms to draw cards while you're comboing. Once you've found one way to rebuy your lands, all you want to do is draw into another one. Another big concern is making sure you have enough mana to continue to combo if you haven't found either Squandered Resources or Concordant Crossroads.

The most exciting card here is Well of Lost Dreams. It ties together some of our land sacrifice outlets like Zuran Orb and helps you dig through your deck to find missing pieces.

It's certainly possible to combo out without Eternal Witness, but it is harder. Eternal Witness provides a shortcut-able infinite loop that makes the combo more compact, harder to disrupt and mechanically easier to execute.

The biggest issue at this point is finding a way to make the combo more consistent. Setting up the pieces you need for the first iteration can be difficult without access to blue's card drawing and cantrips. You could run a ton of [card Demonic Tutor]Demonic Tutors[/card], but I don't really like the idea of pushing this into an overpowered combo deck as opposed to an engine deck with combo potential.

What I like most about engine combos is that you aren't dead if you whiff the first time you go for it. As long as you have a way to rebuy your lands and you don't get blown out by a counterspell, all you've done is generate a ton of value. If you draw the pieces to go for another iteration, then go for it, but otherwise you're still ahead.

The purpose of these tutors is to give you enough consistency to set up big turns that might lead into a combo, but not to make the deck's purpose to combo out as quickly as possible. A typical play with Dragonstorm was to play cantrip, ritual, ritual, Bogardan Hellkite. Similarly, sometimes with this deck you'll just cast Second Sunrise to draw a bunch of cards instead of going off.

It's not a ton to be sure. But with quite a few ways to set up each piece of the combo we don't need a whole mess of tutors. Just enough to find the missing piece. You could probably do a ton of good with something like Sensei's Divining Top and ramp spells to shuffle. You could also use effects like Enlightened Tutor and Eladamri's Call to find combo pieces more easily.

Filling in the Gaps

The last thing this deck needs is a kill condition and a way to protect itself from [card Wrath of God]Wrath of Gods[/card].

As for the effects that crush us, we're actually just cold to Wrath of God once our lands are animated. To be fair, so is everyone else, but I don't much relish playing a game where everyone's lands have been arbitrarily destroyed.

Blood Artist and his friend are great role players for this deck, incidentally both a win condition and pseudo-engine piece with Well of Lost Dreams. We also have a few ways to protect ourselves from board sweepers that could kill our lands. I've picked Wickerbough Elder over other effects because you can rebuy it with Second Sunrise effects, and it can sit on the board and protect you at instant speed.

This puts us at fifty cards, which leaves just enough space for a few ramp spells and forty lands. The lands should be mostly Forests, to power up Life and Limb and other effects that care about Forests in particular. Taking that into account, we end up with this list:

I'm very excited to get some games in with this deck and tune it as time goes on. We'll have to see whether or not this particular build ends up too combo-oriented.

Next week I want delve into the world of tribal and talk about some of the spoiled M13 cards. Since Avacyn Restored just came out, I think we'll have to give the set its due and build an Angel deck!