Every once in a while a card comes along with the potential to define entire formats. Wizards has recently reprinted a card of this caliber from the murky dark ages of Magic past. It will be almost certainly be a powerhouse in aggressive Standard decks. It may even be good enough to break out in Modern.

The card I speak of is, of course, this one: 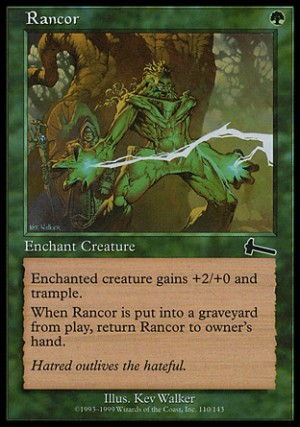 For some time this iconic aura has been the standard against which other auras were measured. In recent years we may have stopped comparing auras to Rancor, but that is only because they all pale in comparison to power-boosting equipment.

In my opinion, Rancor is the best aura ever printed, and probably always will be. Those of you who have never played with or against this card may doubt my resolve, but rest assured it is stronger than it looks.

Last weekend I lost the only match in which my opponent played a Rancor, which reminded me just how powerful it is. He basically just played some mediocre green dudes but Rancor let his little creatures trade with my big creatures before helping his big creatures kill me.

In Standard, Rancor has many applications. I don’t think this card will spawn a new deck on its own but it makes quite a few decks better.

Let’s start with the most obvious candidate, G/R Aggro. Look how easily Rancor fits in this deck:

Rancor actually does everything in this deck. If all you have is a lowly Birds of Paradise, Rancor turns it into an actual threat. That’s to say nothing of its synergy with Swords and Wolfir Silverheart. Pair it with Sword of War and Peace to steamroll chump blockers and guarantee that your sword triggers. Or combine it with Wolfir Silverheart to swing for approximately a billion damage.

If all that were not enough to convince you, compare Rancor to Wild Size.

First of all, Wild Size is a one-time pump spell, whereas Rancor sticks around. Wild Size draws you one card, whereas Rancor draws a card every time one of your creatures dies. Even if the card you draw is always another Rancor, the power of this effect should be obvious.

And Rancor clocks in at a full third the cost of Wild Size.

How cheap does Wild Size have to become for you to play it in Constructed? I submit to you that at one mana it is not only playable, but very good.

Moving on, Rancor also fits extremely well in Dungrove Green decks. Dungrove Elder's main drawback is its lack of evasion. He typically grows larger than Primeval Titan throughout the course of the game but being chumpable by any creature on the field keeps him in check.

With Rancor that is no longer an issue. It makes Dungrove Elder into a huge threat early in the game. Imagine the following series of plays. They play Llanowar Elves turn one and follow it up with Dungrove Elder. On turn three they suit it up with Rancor and attack with a 5/3 shrouded trampling monstrosity that you are sure to have an extremely hard time killing.

Of course, Dungrove Green has a lot of overlap with G/R Aggro but you can see the power of Rancor in both strategies.

Another similar strategy that may choose to include the reprinted enchantment would be Birthing Pod:

In this aggressive Naya Pod deck, Rancor pushes through damage and provides virtual card advantage to close more games. I could even see something as innocent as a 1/1 flying spirit token win you the game with Rancor.

This deck sometimes clogs the ground with creatures and ends up in a stalemate. Rancor will allow you to pull ahead in these situations.

One final deck that gets a huge power boost from Rancor is Infect.

Most likely it will be monogreen, but I want to explore this concept in a variety of combinations. Monogreen Infect seems like the most powerful because it allows room for Cathedral of War. However, Blue might be needed if only for the unblockable ability on Blighted Agent.

For now, take a look at a monogreen version:

Regardless of the shell you put it in, Rancor provides a powerful effect. I’m sure there are other ways to abuse it, and I expect to see it frequently over the next year while it’s legal in Standard.

I noted with delight and/or chagrin that everyone appararently agreed with my Top 10 from last week, since there were no posted comments. Whatever happened to the fabled mass of opinionated Magic pundits?

Don’t be shy about posting your thoughts! Have any other ideas about how to abuse Rancor in Standard? Any sweet brews in Modern to take advantage of our fancy new reprint? Sound off in the coments below and let’s get the polemic started.

Unleash the Force of the Rancor!

12 thoughts on “The Return of Rancor”