I haven’t been brewing nearly as much as I used to, and when I first saw Brad Nelson’s monoblack trading post deck I barely skimmed the list. I wrote it off almost entirely because it was monoblack, as my brain currently filters monoblack to “bad”.

Since then, Brad has continued to write about the card ad nauseum, but for the most part his lists haven’t been very exciting.

A couple days after Brad posted his initial list, my friend Jens Erickson sent me this spicy meatball:

Now this, this got my wheels turning.

The basic Trading Post engine is more or less this: 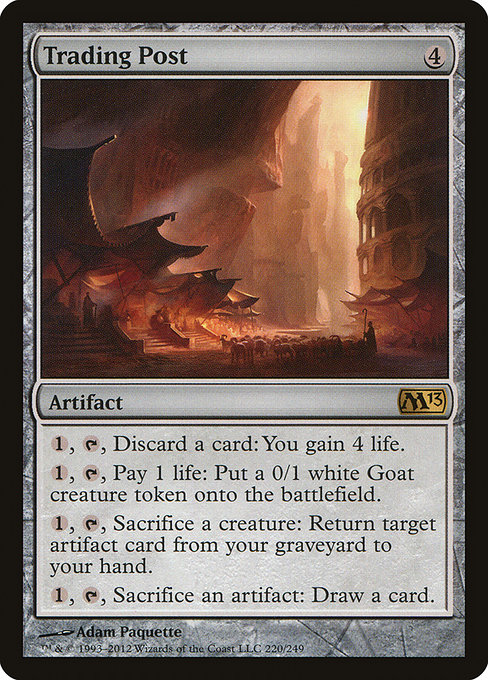 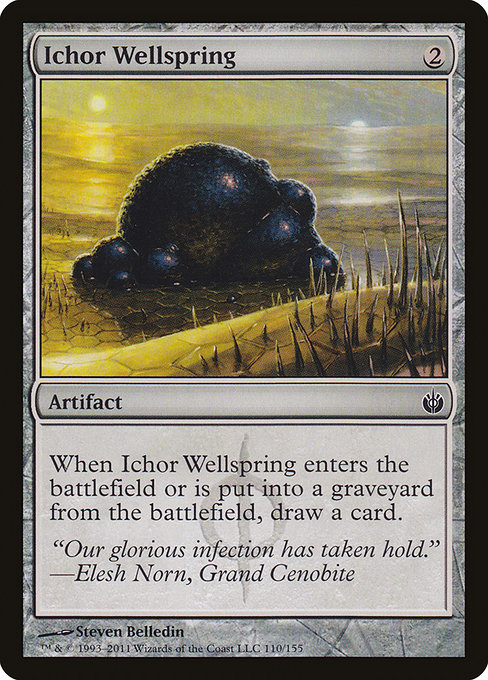 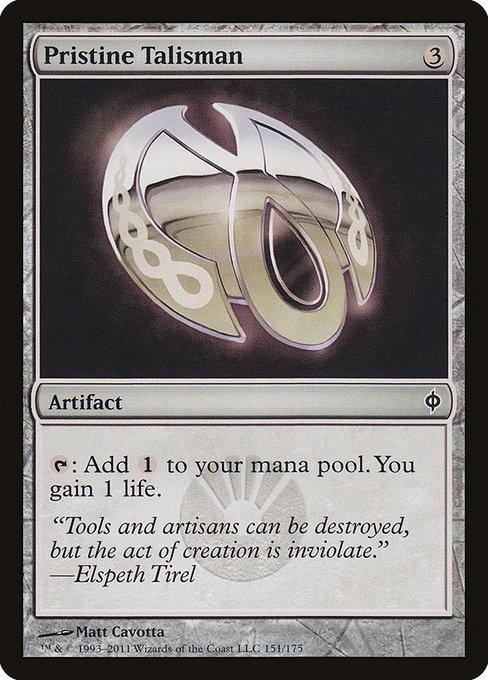 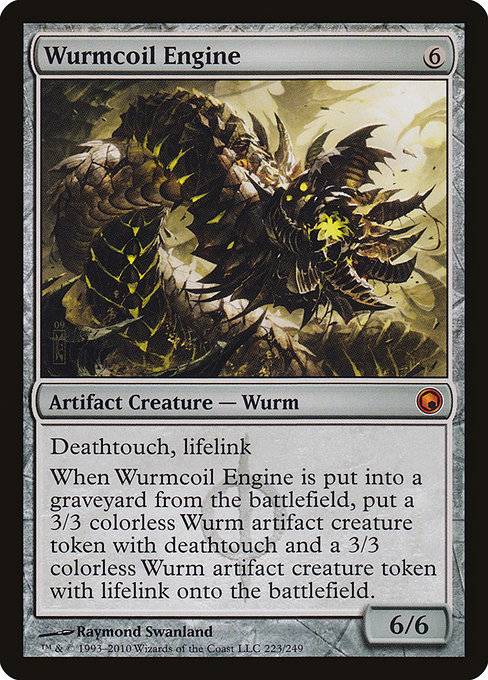 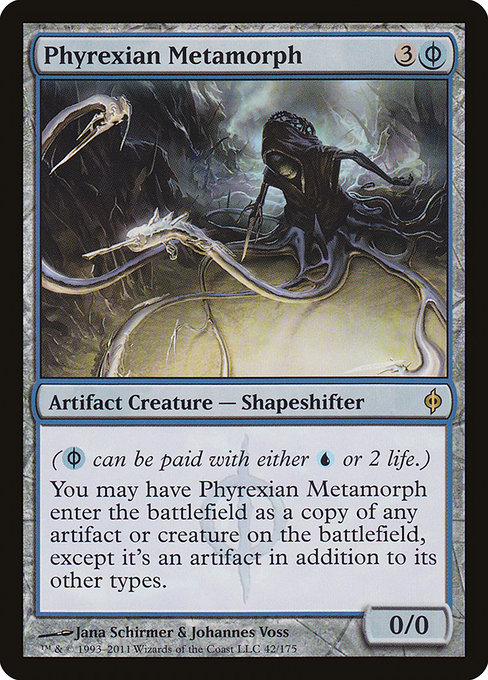 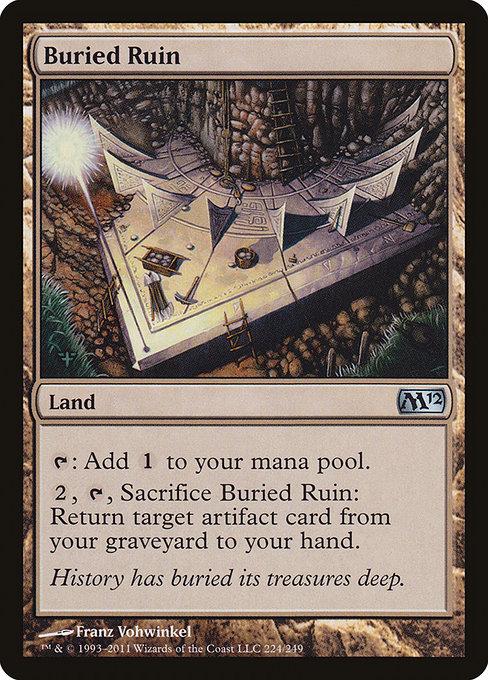 This list plays a few more artifacts, but these are the ones that I consider the most important when moving forward with Trading Post brews. These cards make up your life gain package, your card advantage engine and your win condition.

While this deck struggles somewhat in the early game, the life gain of Pristine Talisman, Trading Post and Wurmcoil Engine makes stabilizing rather easy provided you survived long enough to cast them. I’m also pretty sure that Spine of Ish Sah + Trading Post is about as powerful as endgames come.

Jens took roughly this list to the most recent PTQ in Madison and ended up losing his win-and-in to go 5-2 on the day. As suspected, his list had some trouble against Delver decks.

The major problem with this list is that it’s not really two colors. It’s a monowhite deck that splashes Bonfire of the Damned. This is awkward for a few reasons. The first reason being that the deck can’t reasonably support lower-end red cards like Pillar of Flame and Whipflare - aka red cards that are good in the Delver matchup. The other awkward element is that the deck is splashing for what is far and away its strongest card.

I discussed this at length with Jens and we decided that a “Big Red” deck was probably just more powerful and consistent than his initial list. I spent some time brewing and came up with the following:

4 Phyrexias Core
16 Mountain
3 Buried Ruin
In addition to having access to more, cheaper removal, the other major change that I made in constructing this list was adding Sphere of the Suns. This is largely a nod to Dungrove Elder. From my experience playing UR Bonfire Control, I’ve played a lot of games where Dungrove Elder was just a turn ahead of my Bonfires, and having more mana acceleration helps to combat this problem.

The other cool thing that Sphere of the Suns does is enable a “2-4-6” curve into Wurmcoil Engine, or just an early active Trading Post. Not to mention that “cycling” dead Spheres is pretty sweet.

I like this list quite a bit. It’s pretty consistent and powerful. As a matter of fact, if counterspells were a non-factor I would have stopped brewing here...

But that’s not the world that we live in.

When I say that counterspells are a factor, I mean two things. There’s the obvious point that this deck is drawing to a few very specific spells, which makes it somewhat weak to counters. The other manner in which I mean that counterspells are a factor is that this deck doesn’t get to play any, and that means that it doesn’t have any manner of catch-all for opponents that decide to go over the top.

You basically just have to pray that the things that you’re doing are better than the things that your opponent is doing. You also really don’t want to play any manner of Trading Post mirrors, as whoever draws the first Post will probably just win.

Unless, of course, they’re monoblack, in which case you probably just win as you have four copies of “dome you for a million”.

Anyway, this line of thought led me to exploring monoblue Post. My starting point for this was to look at Brad Nelson’s Grand Architect deck from GP Minneapolis. I really liked the idea of having both the Trading Post engine and the Snapcaster Mage engine in the same deck.

Upon trying to build Architect Post, I concluded that playing Architect just made you too weak to Vapor Snag, Dismember and sometimes Bonfire. This felt like an awkward place to be. I quickly cut every copy of Grand Architect and ended up with a monoblue list playing four Pristine Talisman. The card played exceptionally well in the other lists and monoblue shouldn’t be any different in this regard.

Even without Architects, Vapor Snag was still good against Wurmcoil Engine. Additionally, with Delver of Secrets and Rancor being problem cards for the format at large, I made some room for Mental Misstep in my deck. It also happens to do work against Zombies and Elves, which seem to be picking up popularity. Mise.

The Trading Post engine remained more or less intact, with the most noticeable cut being Sad Robot. I like Solemn Simulacrum quite a bit, but I needed to make room for the Snapcaster Mage package. This deck doesn’t really have any problems generating insane value in the late game, and I’m of the opinion that the number of spells that cost more than three should be kept to a minimum.

When people see me playing this deck, the most common question asked is “How do you win?” And the best answer that I can give is “Eventually.”

The deck plays out in a pretty straightforward manner. You spend the early turns countering/bouncing/copying opposing threats while digging for a Wurmcoil Engine. Once you get one to stick the game becomes very difficult to lose. I have had many opponent’s copy my Wurms only to realize that they’re much more relevant to the guy with the Trading Posts and Buried Ruins.

While Trading Post mirrors have been awkward for previous incarnations of the deck, the monoblue Post list has the huge advantage of being able to counter opposing Posts, the value of which cannot be overstated.

At this point in time I’ve used this deck to take down a couple FNMs and a Game Day, but these achievements aren’t terribly notable. I’ll be taking this deck to the SCG Open this Saturday in Kansas City, and I don’t hate my odds.

Next week I’ll be sure to fill you in on how that event goes (went?) in addition to discussing various matchups. Of course, the best way to learn is just to try it out for yourself.