I opted to skip normal prereleasing this weekend and instead did a two-headed giant event with my wife. This was the first time I ever played sanctioned two-headed giant, and it really was a blast. Because the prerelease used the seeded boosters, we got to construct two decks from twelve booster packs instead of the normal eight. I don’t know about you, but I consider playing with overpowered Limited decks to be ridiculous fun.

Paying an entry fee of $50, I was putting myself immediately into a hole with my draft-for-free project. Things would need to go well over the course of the day just to break even. Luckily, my concerns were alleviated pretty quickly: 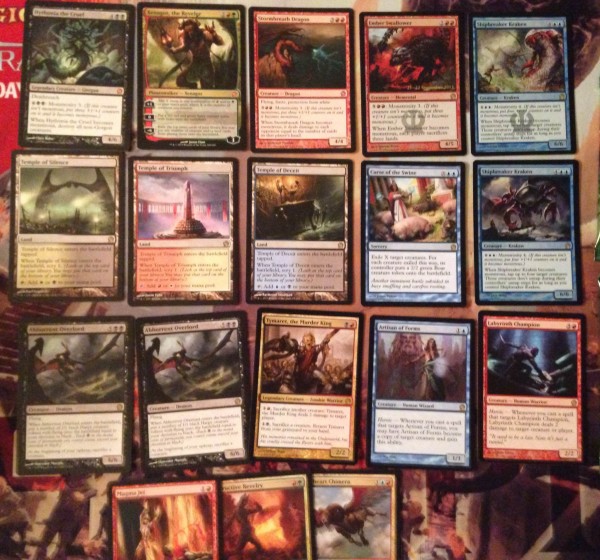 Yep, that pack-foil Shipbreaker Kraken sure made me feel better about the entry fee. Oh, and the Planeswalker and mythic dragon were good, too. For my deck, we decided to supplement the Path of Wisdom with some ambition:

Two notable things about this deck: a high curve and a lack of good removal. The high curve was a conscious decision that I’ll discuss in a moment, but the lack of removal was not really something over which I had any control. I played what I opened and wished I had more. For my wife’s deck, we supplemented the Path of Battle with a little might:

This deck is fine on its own, but it worked especially well in concert with the UB deck we constructed. Because Voyaging Satyr is able to untap any land, we played all our copies in this deck in order to help the UB deck ramp up to its fatties. This deck also had a significantly lower curve for two reasons: help us survive until the UB deck can take over the game, and put on pressure to force opponents to use early removal on relatively unimportant creatures. When this plan worked, it worked really well.

I won’t go into too much detail about individual rounds, but I’ll discuss each briefly. Our first match was against a RW Heroic deck paired with a UG deck of some sort. We played Stormbreath Dragon, did eight damage with its heroic activation, and just won easily from there. Our opponents were not helped by their UG deck flooding out.

Financial musings from round one : Stormbreath Dragon was really good. I don’t think it’s as good as Thundermaw Hellkite, but protection from white is a nice consolation prize. I was also underrating its monstrous ability—making this thing a 7/7 and tacking on a few points of direct damage (maybe more than a few when playing against control) is quite the upside. Monstrosity may not shine as much in Constructed, where removal will be more plentiful and efficient, but having that additional option is big game. I could see this card being pertinent in Standard, but still suspect Thundermaw Hellkite is better for Modern.

During the second round, we fought a BW deck and a RG aggro deck. The RG deck put on some early pressure, and Erebos came down mid-game for the BW deck. Our opponent didn’t once draw an extra card with it, which I found somewhat strange, and also never reached the needed devotion threshold. The game was very stalled out and I was afraid we were going to go to time, but eventually Hythonia the Cruel cleared the board and we won easily from there.

Financial musings from round two: My first chance to play against one of the new god cards left me underwhelmed. Our opponent didn’t play it to maximum efficiency, so I’m reserving full judgment for now, but in Limited, at least, it appears these gods may not be everything I’ve been hoping. Hythonia the Cruel won us the game hands down, but it’s hard for me to believe it will see any Constructed play outside of EDH.

In round three, we fought a RW heroic deck and a UB flyers deck. The blue deck led with Vaporkin into Nimbus Naiad, with the heroic deck also applying pressure. They flooded the board quickly and we were on the back foot with very few ways to deal with flyers, so we played to our one out—playing and activating Hythonia. I hit every land drop on time and played Hythonia with seven lands out, ready to sweep the next turn, but was forced to block a two-power creature to stay alive and was blown out by Lash of the Whip. What we really needed was one of my wife’s Voyaging Satyrs to activate Hythonia a turn early, but it was not to be.

Financial musings from round three: Our UB opponent played a Thassa in this game, which was slightly more impressive than Erebos. Three to four scrys probably netted about a card of advantage, two or three creatures came in as unblockable, and Thassa did get to eat a blocker once when devotion was reached. We eventually used Fade into Antiquity to get her off the board, but the damage was done. Still, in a Standard blue deck, when will Thassa’s devotion threshold ever be reached? Blue isn’t exactly a permanent-based color.

For this tournament, a 3-1 record paid eight packs to a team and a 2-2 record paid two packs. Our round four opponents offered the split (so five packs per team), which we declined. We were facing a BW deck and a UR deck. We played a very exciting game in which we had a monstrous Stormbreath Dragon and a monstrous Ill-Tempered Giant enchanted with Nimbus Naiad, but we lost almost single-handedly to a 1/4 common in Scholar of Athreos (which drains for two off each activation in two-headed giant). Our opponents' Shipbreaker Kraken going monstrous sealed the deal for them. We needed to draw Lightning Strike or Savage Surge to kill them from three, and neither came up. I guess we should have accepted that split?

Financial musings from round four: Not once in all four rounds did my wife get to play Xenagos, the Reveler, which was pretty disappointing. I was hoping to have some insight regarding this card, but it just never came up. So I’m still just theorizing that Domri is better. It’s easy to say I was wrong to decline the split, and maybe I was. I usually accept them when it’s splitting first and second, but lower-level splits like this aren’t as appealing to me.

Adding Up the Score

Arrangements have been made to sell Stormbreath Dragon and Xenagos, the Reveler, for $45 to a local player. There’s a chance either or both could see an increase (I expect the dragon will, in fact), but getting TCG Player low in cash isn’t always possible. In the week following the prerelease, though, card availability is an issue and folks who plan to play Standard the following weekend will pay a premium in order to be prepared. I could have waited to see where the prices go, but my stance is that new cards should almost always be traded or sold. I might miss on individual cards on occasion, but in general, this practice nets some nice rewards off of cards that are later available for a pittance compared to prerelease values.

I also sold my Dismiss for a dollar, which means I have already recouped $46 in cash from my $50 entry fee. With two packs, three scry lands, several dollar rares, and about 150 bulk non-rares, I think it’s safe to say I am playing for free so far. However, this was more due to luck than anything—if I hadn’t pulled two money-mythics in this event, I would be far behind. I’ll need to tighten up my play for future events.

In closing, I want to mention some of my worries regarding the format. Not once was our Stormbreath Dragon removed during this tournament. The removal in this set is extremely weak, especially against larger creatures. Enchantment removal seems completely main-deckable, which will help somewhat with the problem, but it won’t solve it. The only thing keeping me hopeful is R&D’s obvious excitement and belief that the set is badass. If they think it’s going to work, I’ll have faith, but I have to admit I’m not looking forward to a year of being unable to kill big creatures. If this set plays like Avacyn Restored, which many are saying it does, there will be times where good deckbuilding and tight play will not be able to beat certain bombs, and that’s going to make this project harder. That is, unless I’m the one pulling the bombs. I’m going to hope for that. Until next time…