One of the most important factors within your control when you’re trying to play Magic for free is actually an ideal that can be applied throughout your life: don’t be lazy. This doesn’t necessarily mean that you have to work your ass off at all times, but it does mean that little things make a difference, sometimes in a big way. Today I’d like to discuss the bulk commons and uncommons that pile up when you draft regularly.

I’ve written about this in general terms before, but today I’m going into more detail. Let’s start by reviewing the most up-to-date Zero to Draft stats:

Since the last installment of this series, I’ve managed to 2-0-split two more eight-man pods, all while increasing my total number of events as well as the value of my collection (especially helped by a Thoughtseize I was passed in my last draft. Yes, it was thrilling). But what I really want to draw attention to today is one of the stats above: “money received from card sales/buylisting.”

I’ve detailed many of my sales in earlier Insider installments of this series. When Theros was initially released, cards were (of course) hyped in price and worth far more than I was anticipating they would be a couple months later. I was lucky enough to open sweet cards like Xenagos, the Reveler and Stormbreath Dragon at the prerelease, so I sold them in my local community at low but still hype-driven prices. In my experience, a non-retail seller has the best chance of selling cards to local players at close-to-retail prices right after a set is released. So if I open a hyped new card at the prerelease, I place special emphasis on getting rid of it as soon as possible.

Another major portion of my card sales have come from buylisting, either to my LGS or one of the vendors in Trader Tools. I generally ship out cards that I don’t anticipate going up over time: bulk foils, not-quite-but-soon-to-be bulk rares, overhyped new cards, soon-to-rotate old cards, and spiking cards fueled by speculation rather than results. Shipping costs definitely impact the bottom line when mailing buylist orders, but Trader Tools allows you to find the best buy prices. I think those two factors more than balance each other out.

What About Everything Else?

Okay, if you’re reading this site, you likely already have an idea of the best ways for you to get value from your mythics, rares, and money uncommons. You might even buylist a few lesser items. But if you’re obtaining new cards only from drafting, like I am in Zero to Draft, you’re going to find you have a much smaller pile of rares compared to a quickly-growing pile of commons and uncommons.

Many players just leave these commons and uncommons at the LGS as freebies, and for my purposes, I couldn’t love this practice more. I will always accept an offer of free cards, no matter how “useless” they are. Bulk adds up, and bulk equals money. The last big portion of my card sales in this project come from selling casual collections on Craigslist. I post something like this:

Collection of Magic: The Gathering cards perfect for beginning or casual players. This lot includes 10 rares, 120+ basic lands, 200+ uncommons, and 600+ commons. These are draft leftovers from [names of blocks included], so most cards in this lot have been played no more than once. This is a kitchen-table collection at a kitchen-table price, so don’t expect too many Standard staples or any money cards. Text Danny if you’re interested.

I make sure to include a picture so people can see how many cards they’re getting, and while I’m definitely including only bulk rares in these collections, I specifically choose ones that casual players are likely to enjoy. These lots easily sell for $15. I pay $2 to my LGS for the card box (and yes, I know I can get them cheaper by ordering in bulk online, but I only need a few a year and I don’t mind paying a little more to help out a locally-owned store), so I net $13 per box sold. Since I started Zero to Draft,  I’ve sold two of these boxes, have a third one ready to list on Craigslist as soon as I get around to it, and am well on my way to filling a fourth one. I’ve managed to fill so many because I regularly accept offers of draft decks people don’t want.

This really doesn’t take much time extra time, either. Putting some cards in a box at my LGS and transferring to a box at home takes essentially no more time than just transferring my own draft decks into a bulk box, and listing items on Craigslist takes 90 seconds once one is familiar with the process. The most time-consuming part is the meetup, but I always have folks meet me at a location close to my work or home, so even the exchange never takes longer than 10 minutes. It’s a very small time investment for what ends up being a significant help in drafting for free—for each of these boxes sold, I can do a draft and buy a bag of M&M’s!

Did you notice the part of my Craigslist ad where I said, “Don’t expect too many Standard staples”? That’s fair warning for buyers, because I’m definitely picking these out before listing these lots. Players don’t always place a lot of stock in commons and uncommons while a set is being opened, but those cards can get relatively pricey the following year, when they’re needed for Standard but no longer being drafted. Check out the highest-selling uncommons from Return to Ravnica block:

These are relatively high buy prices for cards many people just abandon. Even some commons, like Ethereal Armor, currently buylist for as high as 17 cents. This doesn’t seem like much, but a year of drafting could lead to dozens of copies of any single common piling up. If you buylist 20 copies of several different commons and uncommons at once, you’re going to start reaching actually-relevant amounts of money.

Here are the commons (first photo) and uncommons (second photo) that I have pulled from my bulk boxes during the Zero to Draft project. 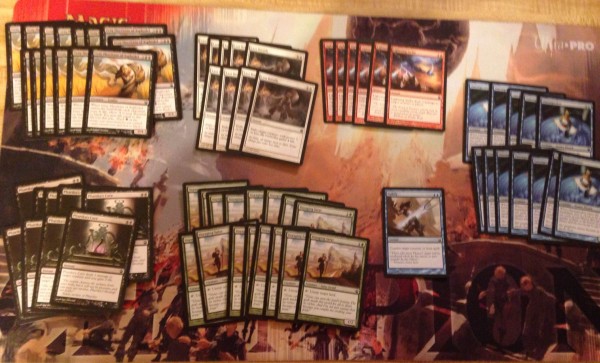 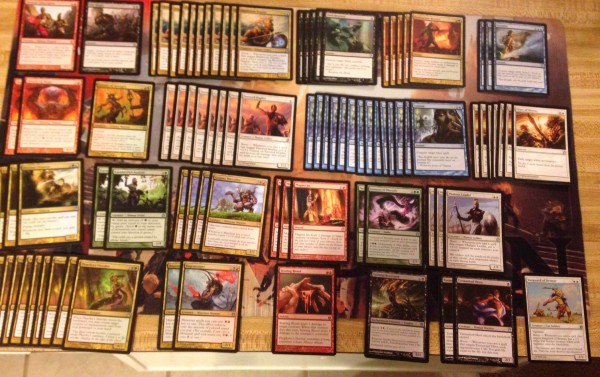 Some questions and observations to keep in mind when considering which commons and uncommons to pull and which to leave in the bulk box:

This doesn’t really take a lot of time, folks. When I get home from a draft, I separate out cards for my trade binder, cards for my bulk boxes, and cards for my to-buylist-next-year box. When Theros is no longer being drafted, I’ll sort Trader Tools by buy price and see which cards are selling for a reasonable amount. By that time, I’ll have enough copies to make it worth my while to send an order over. If a card doesn’t hit and I’m later forced to throw it in a bulk box, what have I lost? A minute or two of my time? For the chance at $5-10? Seems like a fair trade to me.

I’ll close today by listing cards I’ve been actively pulling (or will actively pull when I actually draft some copies) from the current format. Remember: just because a card was really, really good in Limited doesn’t mean it will ever have a buylist value. For example, Stab Wound was a first-pickable common, but only in the context of its Limited format. Cards like this (Wingsteed Rider and Griptide come to mind for Theros) are not worth pulling. Here’s what I’m thinking is worth it:

There are cards that I haven’t been pulling that I think maybe I should have (possibly Gods Willing and Rescue from the Underworld), and some of the ones listed above may not ever come to fruition. It’s also possible that as the metagame evolves, more format staples will be born. And of course, seeing that Drainpipe Vermin now buylists for 10 cents reminds me that this is an art, not a science. All we can do is to try to maximize value while minimizing time and money spent. Everything else is up to factors outside of our control.

Do you have any suggestions for additions to the lists above? Please share in the comments!

6 thoughts on “Zero to Draft: Extracting Every Last Penny of Value”