During the first couple weeks of my Zero to Draft challenge, I only played Sealed events. This week I finally had a chance to draft Theros, and I was pleasantly surprised. The Draft format feels significantly more nuanced than the Sealed format, so I am hopeful this will not end up another Avacyn Restored, a fear I previously expressed.

I lost in the finals of my first Draft with this deck:

The pack payout for first and second place in this single-elimination Draft is 5/3. Usually I split so that I have a draft set for the following week. In this case, I had five packs before this tournament, so after packing in, I had one left over. Losing and getting three packs would still leave me with a draft set, so I decided to go for it. I lost a close three-game match in the finals, but I can only blame myself. Not playing much this summer has led to some pretty sloppy play on my part, and I’m going to have to get back in the proper mindset to win events.

I drafted a second time this week at a different LGS, paying $15 in cash for the privilege. The payout was 9/5/3/3, and I finished at 3-1. Unfortunately, this put me in fifth place on breakers, so I didn’t score any packs. I did tighten up my play quite a bit, with both losses in my losing match coming with my opponent dead on my next attack. It was frustrating to not win anything, but I can take solace in the fact that I played a little better. Here’s my deck:

This deck was kind of a hybrid Heroic-Control deck. Some games I curved out with my early beaters backed with Ordeal of Thassa, other times I just defended until I could land Medomai and close out games I was losing by a lot. I’d prefer to avoid hybrid decks in the future and just go with optimal builds, but this one played okay.

I like the tempo-based nature of the format, and consider blue to be possibly the best color. Voyage's End and Griptide seem as good or better than the best common removal in other colors, and with all the enchantments and +1/+1 counters everywhere, it’s not hard to get a card or two of value off of these bounce spells. In addition, blue has the best common bestow creature (Nimbus Naiad), lots of good five- and six-drops, and the ability to play either an aggressive or controlling game.

Anger of the Gods for Vraska the Unseen

In my second Draft this week, I opened Anger of the Gods. Obviously this card is going to be a player in Standard and possibly Modern, but I think it’s near its peak right now. An awful lot of Theros is going to be opened, driving the price down. And remember that Slagstorm was only around $4 in Standard, despite being a four-of in Wolf Run Ramp, one of the most popular decks of its season.

On the other hand, Vraska is a Planeswalker, probably near its floor, and has much more room to grow, being a mythic from last year’s block. I also got a slight bit of value here by leveraging the hot new card into a boring card from yesteryear. Even if Vraska doesn’t go up, the liquidity and stability of a bottomed-out Planeswalker in my collection is a net positive.

This is a relatively minor trade, but I’m hoping there’s upside. Prognostic Sphinx can be had for as low as 50 cents right now, and the card is just bonkers in Draft. That may not translate over to Standard play, but if there are blue decks that want to land a finisher a few turns before Aetherling comes down, this seems like the obvious choice. Keep in mind that without Cavern of Souls in the format, it’s going to be harder to resolve Aetherling, which may impact Prognostic Sphinx positively. I like this card enough that I actually bought a couple playsets—my first Theros spec (note that this purchase is outside the bounds of the Zero to Draft challenge).

Boon Satyr for Whip of Erebos

Yeah, I made this trade on Friday night, before Boon Satyr showed up as a four-of in the Cleveland Open winning decklist. It looks bad for now, but I’m hoping it will pan out after a few weeks. If not, that’s too bad, but I don’t think the upside on Boon Satyr is enough to lament over a couple lost dollars.

As for the Whip, people are excited about its synergy with Aetherling and Obzedat, so I figured grabbing a copy couldn’t hurt. I’ll trade for more at this price, but I’m not super high on the spec, it’s just what was available in this trade.

Medomai the Ageless for $2 Cash

This might have a future as a casual pick, but I think it will go down before it goes up. I’m happy to accept retail value in cash on it for now.

For having built this small collection from only four Limited events, there’s actually some nice substance to what I have right now. Here a breakdown of everything in my binder at the moment: 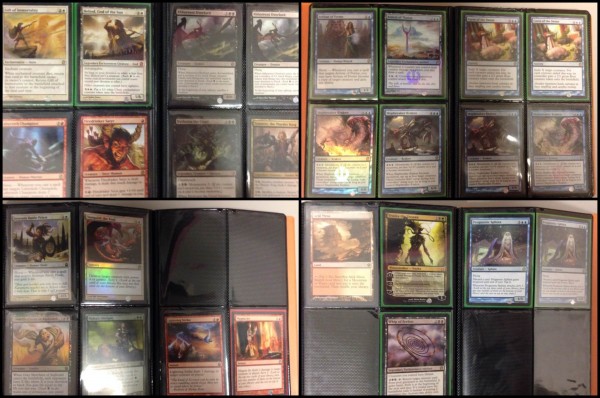 A conservative estimate of these cards (Theros foils and promos are not on Trader Tools yet, so I put down everything not listed as 10 cents) has a buylist value sitting at $52.56, which when added to my actual sales, puts me $25.56 above what I’ve paid so far, in addition to four packs for my next Draft.

I have also accumulated a fair amount of bulk, including two or three discarded Draft decks in addition to the cards I opened myself: 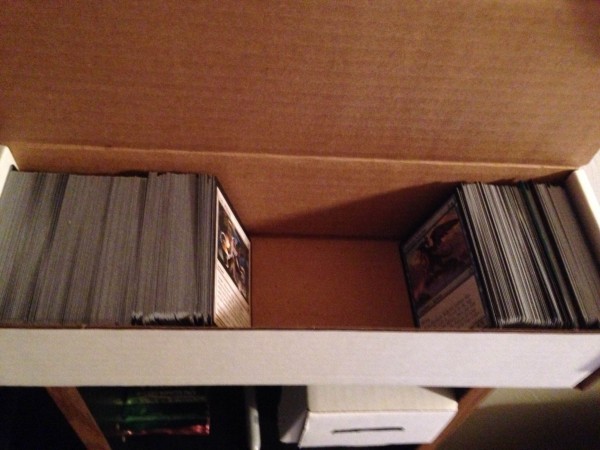 When I fill this 800+ count box, I should be able to get about a Draft’s worth of value from it. Don’t let your leftovers go to waste—this box is filling extremely fast for how few events I’ve played so far.

Here’s a summary of the Zero to Draft challenge so far:

I’m doing quite well considering I haven’t yet won a tournament. Granted, I’ve gotten lucky enough to open money cards in each event, but that’s a little easier when a set is new, since everything is overpriced. That’s why my policy has been to trade or sell everything from Theros (Prognostic Sphinx aside).

With how things are going so far, my goal is well within reach, although a few losing weeks with no money cards will put me right back in the hole. I’ll need to continue to tighten up my play and win some events, but more importantly, I need to leverage my current trade stock into bigger and better things. Just because I’m ahead right now doesn’t mean I can relax. If anything, I need to become ever more vigilant. Let me know what you think in the comments!

3 thoughts on “Insider: Zero to Draft – No Longer a Misnomer”