Did you know that Elspeth, Sun's Champion is so good in Block that there’s been serious discussion about it being banned?

Of course, Wizards didn’t end up going that way in the most recent B&R update, but that should give you the first insight you need into Theros Block Constructed.

On the other hand, why should you even care about Block Constructed?

That, at least, I can answer. Block has usually been a great portent of what’s to come in Standard. But because Block is only played online (and then at a Pro Tour), the prices of the cards in paper remain depressed before shooting up when Block suddenly becomes Standard and those same decks are good.

This doesn’t always hold true, of course. In Innistrad, for instance, Lingering Souls and Intangible Virtue were banned for being oppressive. Souls, at least, went on to be a major player in Standard. So those results weren’t exactly great.

But other seasons have been. Tempered Steel made the transition. So did Oracle of Mul Daya and Jace, the Mind Sculptor. Green-White from last year’s Pro Tour-winning deck at least existed in Standard, even if it never took off entirely. But Jace, Architect of Thought sure caught on, and I think we all did well when it went from $6 to $20.

And it was easy to see coming. All you had to do was pay attention to Block.

Now, Journey into Nyx hasn’t fully hit Magic Online yet, so this is a topic we’ll have to revisit again before the Pro Tour. But we do know enough about the format to begin to identify some targets.

So let’s do that.

Basically, Block has only a few viable strategies right now. The biggest by far is black-based aggro. Technically we can even call it Devotion thanks to Gray Merchant of Asphodel, but the truth is it’s aggro.

Agent of the Fates 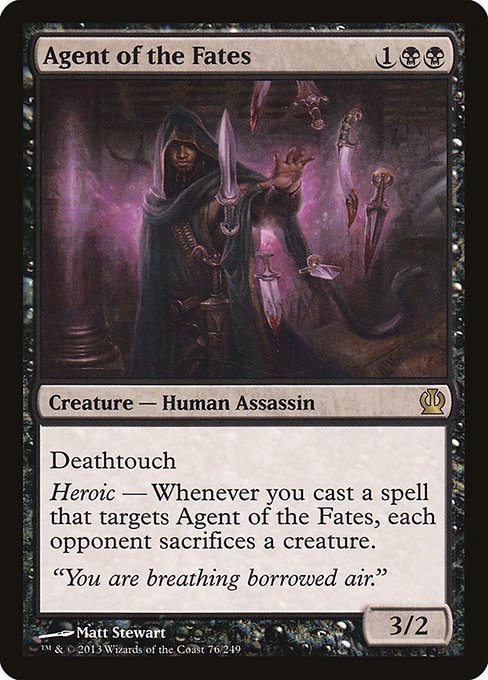 The key cards, and ones that have some great potential in Standard next season, are mostly from Born of the Gods. One of the main ones is Pain Seer, a four-of and a major player. This has to be at or near the top of the list of targets.

Then there's Agent of the Fates. Since it's practically bulk right now it’s definitely worth looking at. That said, it’s probably one of the cards that gets cut as the card pool expands since Nighthowler, Herald of Torment and (possibly) Master of the Feast are also in the deck.

Of these, I still like Herald, though you certainly can’t miss with Agent at bulk rates.

But that’s not the only aggro deck. There’s also white-based variants that either make use of the black engine but add stuff like Eidolon of Countless Battles (a pick I really like) and Hero of Iroas. 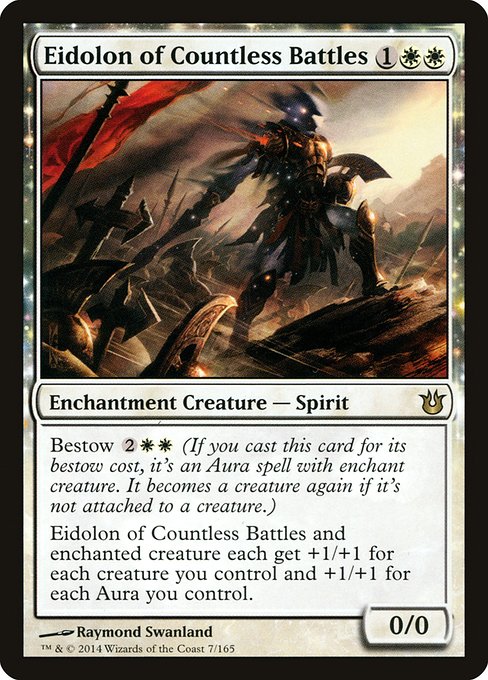 These decks also play Fabled Hero, especially the blue-white variants (which aren’t as prevalent). Again, since Born of the Gods represents a better spec opportunity than Theros due to the amount opened, I tend to lean toward the newer cards.

Gild reigns supreme. Maybe not because of its base power, but because it both deals with a threat and accelerates you to the all-important Elspeth, which is the lynchpin the control decks revolve around. These are basically blue-black decks that splash white solely for Elspeth.

The finisher of choice besides the planeswalker? A target we’ve talked about plenty before: Prognostic Sphinx. Now, I got burned on Niv-Mizzet when Aetherling came along and replaced it as a finisher, so I’m a little wary of Sphinx at anything more than bulk prices, especially since it’s from Theros. Still a solid cheap target, but keep that in mind.

Now it’s not often we see combo being represented in Block, and maybe that’s not the right term, but the fact is Reanimator strategies are very viable in Block.

It’s pretty much all thanks to Whip of Erebos, which makes these decks go. Typically they're junk-colored decks that just use solid value creatures like Courser of Kruphix and Sylvan Caryatid to build toward the endgame, which consists of casting or reanimating Ashen Rider or Abhorrent Overlord.

Overlord was both a promo and a rare from Theros. With that in mind I don’t want any of this card, no matter how solid it is in the deck. I’d rather go all-in on Ashen Rider, which is much more likely to survive the transition to Standard come rotation.

Not only that, but Rider is a solid Commander card that also has fringe Legacy applications. And it’s a mythic. Besides trading into Whips cheaply, Ashen Rider is the card with the most breakout potential. 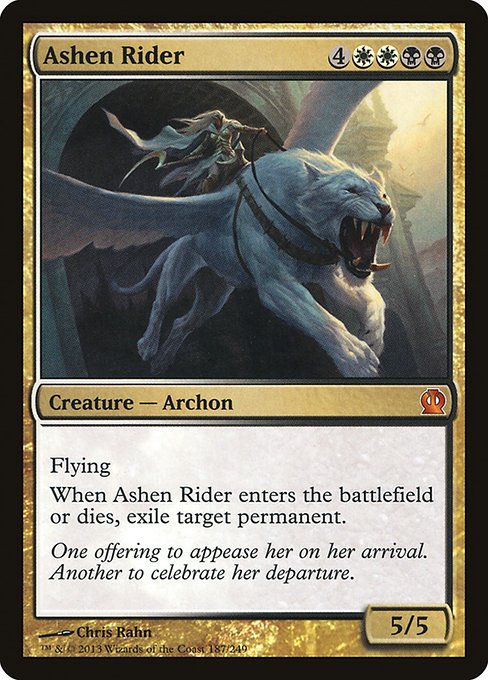 Basically, the format revolves around these three strategies right now (Mono-Red occasionally makes appearances). I expect that to change some with Journey into Nyx, but by and large these will still be the major players come Pro Tour time.

If you remember the whole Wolfir Silverheart run of a few years back, you know Block Pro Tours have the potential to seriously spike some cards. I’ll be keeping a close eye on Magic Online in the next two weeks as Journey enters the fray to see how these decks survive that transition. That in turn will frame my prime targets heading into the Pro Tour and the Standard season beyond.

Remember, the market moves incredibly quickly these days, and there’s no guarantee you’ll get the pile of Agent of the Fates you ordered on day one of the Pro Tour. The next week or so is the time to make any moves, so prepare accordingly.

One more tip: I’ve heard some rumblings of Chromanticore possibly being a thing at the Pro Tour, thanks to some pro testing. I won’t discount it but it’s a stretch for now with all the aggro decks running around. That said, better mana and the ability to lean on Anger of the Gods means five-color could be a possibility. Food for thought based on what I’m hearing from a source.