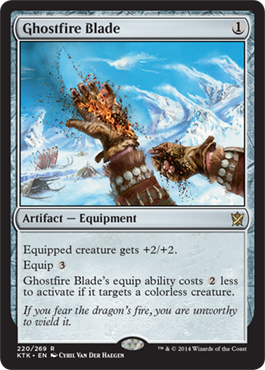 When Battle for Zendikar first launched, the ingest mechanic was met with some skepticism. The cards just seemed odd more than anything, and the power level just didn't seem to be there. Ingest never made a constructed splash, and Oath of the Gatewatch features no cards with the keyword. There are some cards in Oath that help fuel processors, but the tools just don't seem powerful enough to make processing a thing in Standard. If such a deck were to exist, Ghostfire Blade always looked to be one of the more exciting elements. While ingest doesn't seem any better, I believe that devoid now shows promise. 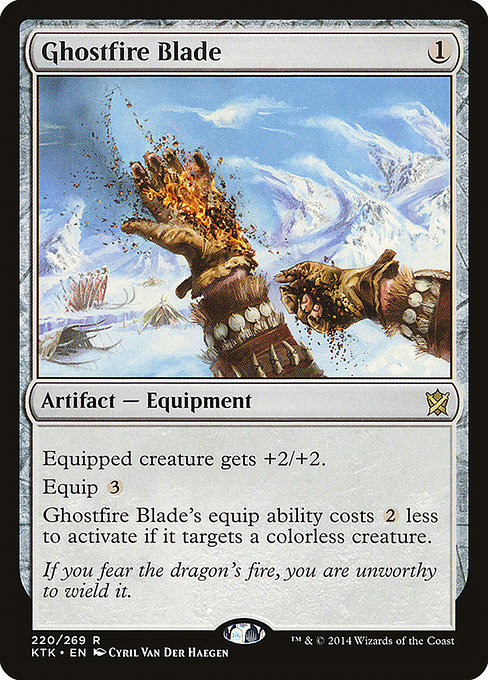 Oath is introducing several cards with devoid that are costed efficiently, and even a number of colorless creatures that have significant upside relative to their casting cost. There are a number of possible directions to take a devoid deck, but I believe that these are the most appealing new cards for the archetype: 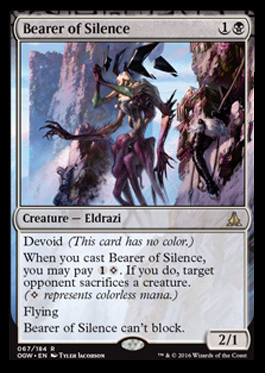 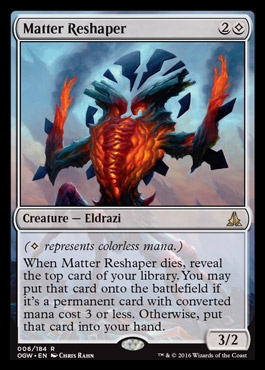 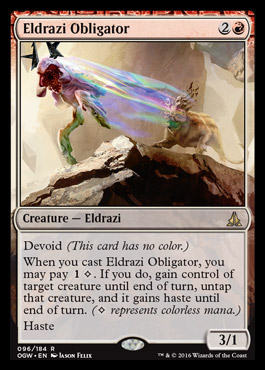 These cards all provide reasonably costed bodies with high potential upside. The edict and threaten abilities make Bearer of Silence and Eldrazi Obligator scale very well, and Matter Shaper will replace itself pretty often. These are my picks for the most appealing new devoid critters, though the set also offers some other solid bodies, even if they don't come with the same upside. 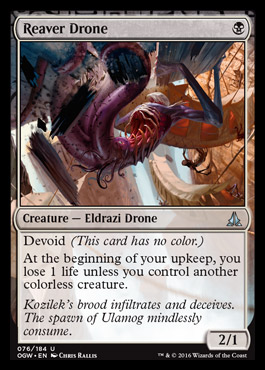 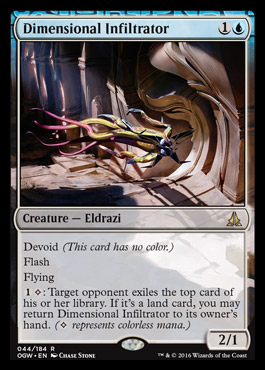 Put them all together, add the most efficient existing bodies for the deck and the other value creature in Hangarback Walker, and we have what looks like a good starting point for a Standard deck.

This deck definitely isn't as explosive as Atarka Red, and it doesn't offer the same value of other Standard decks, but it does offer explosive starts, some great value creatures, and a reasonable amount of resilience. It's possible that Ruins of Oran-Rief just doesn't offer enough for the deck, and that my choices for the spell slots aren't the best options, but I think there's something here. If I were preparing for a big Standard event I would definitely run this deck through the gauntlet and try to find the best version. The elements featured here are rather unique, and if you get the best list before anybody else you could take a tournament by surprise with this shell.

From a financial perspective, this deck doesn't employ any mythic rares so there aren't any big movers. I like picking up the new rares if you can find cheaper copies, though there aren't any great targets here. Matter Reshaper is already pre-ordering for too much, though Bearer of Silence is probably a good pickup if you can find them for around a buck. It looks like they're pretty easy to find for $2, which isn't a terrible price for a set to play with.