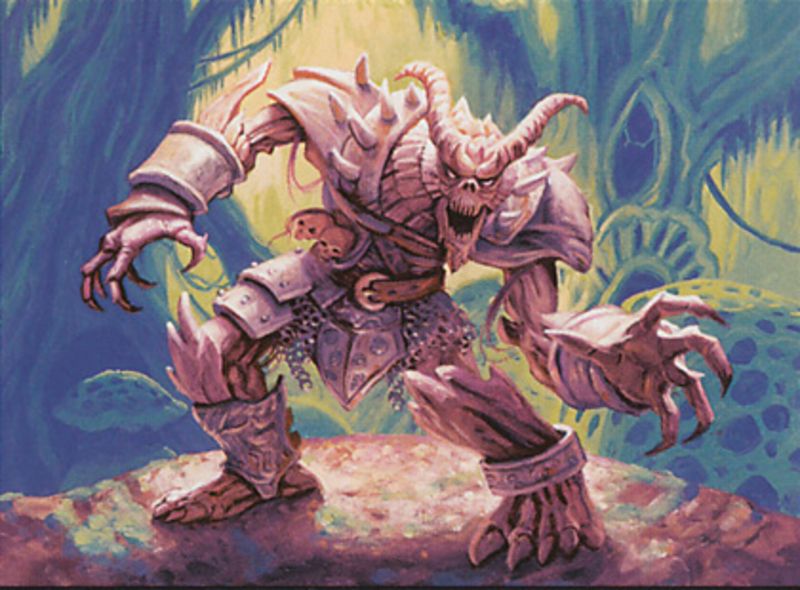 I wasn't planning on going to the Star City Games Modern Open in Indianapolis this weekend, as I wasn't looking to take more time off work, though the urge to battle got the better of me. Given the rumblings about Dredge in Modern, I committed a lot of the last week to trying to figure out if such a deck would be a good choice for the Open. I put in a ton of work, and came to the conclusion that there's too much hate for me to feel comfortable playing the deck. That said, the deck is quite consistent and powerful, and a reasonable choice for those who enjoy this type of strategy.

I tried a ton of different configurations for the deck, and ultimately built my list around a couple base premises. The first is that efficiency is the most important thing, and as such finding a way to play a ton of one-mana spells was the best way to actually win with the deck. Your payoff cards have some built-in variance given that you need to mill the right cards, and if all you end up doing is recurring a Prized Amalgam and a Bloodghast then it would be much preferred to do so on turn two than turn three.

The other premise is that creatures were vastly superior to spells. This was true both with regard to triggering Vengevine---the only payoff card that always has haste---and in regard to the sideboard Gnaw to the Bones which are the only way you're realistically beating Burn.

My early lists were base-Jund splashing the ability to actually cast Prized Amalgam or straight Sultai utilizing Ideas Unbound over Faithless Looting. The Jund build just felt off in a way that I can't properly articulate, and the Sultai list heavily felt the absence of Faithless Looting. Ideas Unbound was sweet, though it was blue-mana-hungry, slower than Faithless Looting, and the fact that it doesn't have flashback means that it could leave some Golgari Grave-Trolls stranded in your hand while you just kind of die.

Ultimately I decided to just jam all the best elements of the deck together to see if the mana worked, and I came up with something that pretty consistently did its thing:

I was dismissive of Lotleth Troll last week, and after experimenting with four it was clear that drawing multiples was really bad. Having one copy was decent for applying pressure, but more importantly it's nice to have a discard outlet to pitch Grave-Troll every turn. Playing with four Gather the Pack ended up with spells that cost too much mana to impact the board too little, and four Lotleth Trolls meant there were too many cards that weren't essential engine pieces. The split seems to work well.

The deck matches up excellently against Jund, Abzan, and Grixis Control, holds its own against Abzan Company, and smashes Tron. Infect is close to unwinnable, and Burn is unfavorable. If sideboarding were even, then this is a nice metagame position for a Modern deck. The issue is, your opponents will often be gaining more from their sideboard than you will.

I was playing in a league against Burn, and after scraping out a close game two my opponent played a turn two Rest in Peace and I immediately conceded the match, dropped from the league, and hung up the deck. I can deal with my good matchups having great sideboard cards, but when my bad matchups also feel obligated to have hate I can't justify playing the deck. I'm a coward, though I do think that the deck has merit.

The only way to make the deck more appealing to me would be to find a more explosive list, though considering that my deck is streamlined for efficiency I haven't found a way to do that. Streamer Magus of the Moon has an interesting list that he's been streaming with, though I've run out of time and interest to play with it:

Gargadon Dredge, by Magus of the Moon

Burning Inquiry is the most efficient enabler that my list doesn't run, and while I've played it in some of my lists and had it do great things I've also had it be terrible. The Dakmor Salvages help make it so Inquiry doesn't just ruin your hand, though the card is very volatile. Sometimes it randomly wrecks your opponent, other times it wrecks you.

Greater Gargadon seems sweet, though there is a difference between sweet and good. What it does is enables you to sacrifice Bloodghasts and net some zombie tokens with Bridge from Below to generate more power than my list is capable of. The other thing it does is sometimes sit on suspend while you die. 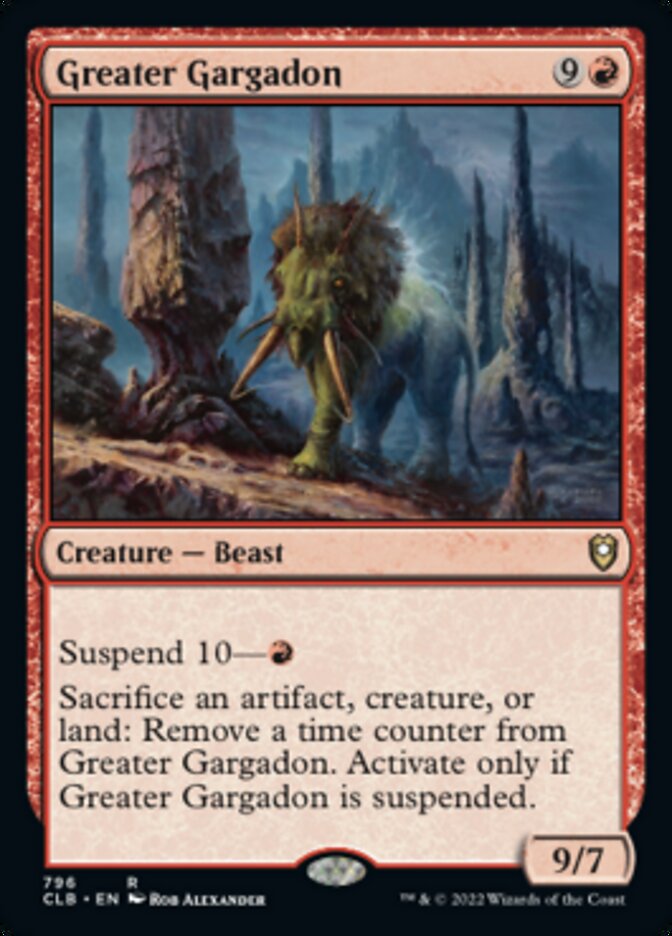 Narcomoeba is a sweet interaction with Prized Amalgam that I eschewed as it doesn't really do enough without Bridge from Below. If you actually cast it when it triggered to enable Vengevine or it was a zombie to enable Gravecrawler it would be a different story, though ultimately this deck and mine have surprisingly wildly varying elements.

Four elements are in every way irreplaceable: Prized Amalgam, Bloodghast, Golgari Grave-Troll, and Faithless Looting. I just don't see a successful Dredge list not running all four of these cards. Greater Gargadon could be a sweet spec, though these four are the most reliable cards.

I already touched on Bloodghast and Grave-Troll last week, and wrote a piece on the free side about Prized Amalgam, though I think we could see foil Faithless Looting really explode soon. There are very few copies on TCGPlayer, most of which are under $7. There are already foil copies of the card selling on eBay for more than that, and SCG has NM foils listed at $15. The card is playable in other decks and other formats, and I feel great 'bout picking up some foils. 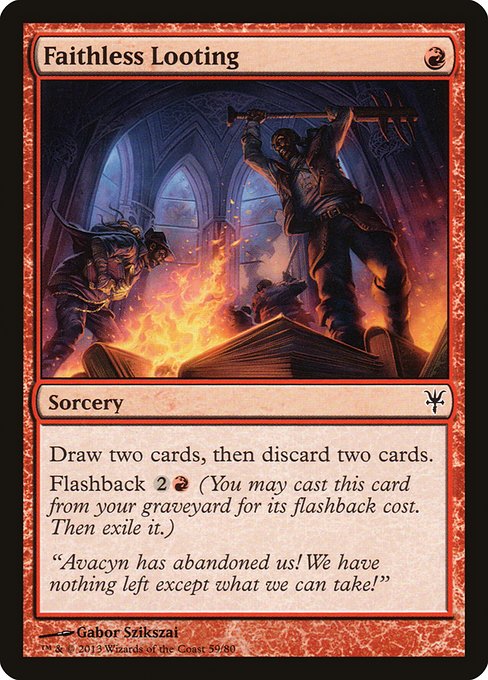 On the other side of things, graveyard hate is becoming ever more popular in Modern. Rest in Peace and Grafdigger's Cage are both pretty cheap right now, and picking up a few would minimally be great additions to your trade binder. Cage has the advantage of going into any deck and also hosing Collected Company, so I prefer Cage though don't mind investing some into both options.

The issue with Modern Dredge is that if you don't want to lose to it you don't have to. As such, the current builds of the deck only have the potential of being flavor-of-the-week type decks. There aren't many cards in the deck that see play elsewhere, so the plan for any specs from the deck should be to move them quickly if and when Dredge has a strong weekend and builds hype.

The fact that Faithless Looting is playable in other decks and the market data available demonstrate that some people are already willing to pay more are the reason that I like foil Lootings more than any other card in the deck.

I would love to be playing Dredge this weekend, but I just can't bring myself to do it. Just because I won't, though, doesn't mean nobody will, and the deck's power is very real. If a pilot successfully dodges hate this weekend, then we could see some pretty immediate price movement. Get ready to sell into the hype!