Below are the total set prices for all redeemable sets on MTGO. All prices are current as of September 6th, 2016. The TCG Low and TCG Mid prices are the sum of each set’s individual card prices on TCG Player, either the low price or the mid price respectively. Note that sets of Theros (THS) are out of stock in the store, so this set is no longer redeemable. 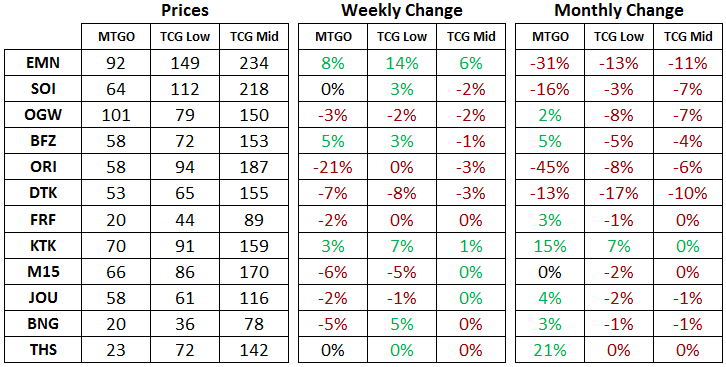 Players and speculators alike should be looking to get liquid over the next few weeks as we approach the release of the new Fall set, Kaladesh (KLD).

Any time a new set is released, it generates a large liquidity crunch where tix become more valuable and prices drop across the board. Being prepared in advance of this means selling down cards and boosters in order to acquire tix. Getting more liquid now means being able to deploy tix when prices are depressed in early October.

The exception to this are cards from the currently drafted sets of Shadows over Innistrad (SOI) and Eldritch Moon (EMN). The next few weeks will see these sets reach their cheapest levels heading into the winter.

With the plane of Zendikar now in the rear view mirror, flashback drafts return to the core set of Magic 2011 (M11). This was the second of the rebooted core sets and brought back the original five planeswalkers and Baneslayer Angel at mythic rare, though it it was a new cycle though that would have its fingerprints all over Standard for years. The titans came out of the gate running and never really stopped, with Primeval Titan still palling around with Valakut, the Molten Pinnacle in Modern.

Blue's card selection and card draw is getting toned down a little at this point, but the excellent Foresee and Jace's Ingenuity would be top picks from more recent sets. Green is still suffering a bit due to the power imbalance between creatures and removal, so you generally will only want to be in green as a support colour and if it is clearly open. Red, white and black all have their strengths, but sticking to removal and efficient creatures will serve drafters well.

There's value in this set so keep an eye out for the Leyline cycle as Leyline of the Void and Leyline of Sanctity are both Modern sideboard staples and are priced accordingly. Obstinate Baloth, Steel Overseer and Serra Ascendant are three other rares that are all worth more than 3 tix due to seeing play in Modern.

Spoiler season for Kaladesh (KLD) is in full swing and a doozy was spoiled last night with the new version of Chandra, Chandra, Torch of Defiance.

This looks to be the flagship card of the set, much like Gideon, Ally of Zendikar was last year for Battle for Zendikar (BFZ). This planeswalker is very flexible, with the choice of the two +1 abilities offering good ways to develop your game plan, and the -3 ability being an excellent way to protect herself. Notably, the first ability is not strictly card advantage as when you reveal a land, you will deal two damage as you are unable to "cast" lands.

The new artifact subtype of vehicle is an interesting new twist on equipment. Both are artifacts and need creatures to function. Keep in mind that creatures that have summoning sickness are possible candidates to crew your vehicles. Skysovereign, Consul Flagship looks like a Standard staple in the making though I would be skeptical about its chance in larger formats.

Notably, vehicles make Reflector Mage marginally worse in Standard since it typically won't be able to target Vehicles with its enters-the-battlefield effect.

Spoilers from KLD will be impacting Modern as well. Most importantly, the completion of the fast land cycle with the five opposing-colour combinations will have a bigger impact than most new land cycles.

These lands are particularly well suited for Modern since the bulk of Modern decks are focused on mana costs up to three mana. Being able to develop your mana base without loss of life and with a choice of colours has made each of the Scars of Mirrodin fast lands Modern-playable. Look for the new cycle to be taken up immediately in multiple decks.

Grim Flayer continues to make waves in Modern, showing up in many of the GBx strategies at the 2016 Magic World Championships. The paper price on this card jumped to over $20 this week and the digital price is poised to reach 10 tix. The prime drafting window for EMN still has a few weeks to go so we'll see if supply can respond to this uptake of play in Modern.

Two cards from Journey into Nyx (JOU) are moving in different directions. Eidolon of the Great Revel is a known staple of burn strategies in both Modern and Legacy. The recent success of Naya Burn decks has pushed this card back to over 20 tix. This card has generally fluctuated between 14 and 20 tix over the last year, so keep an eye on it if it falls back to 15 tix or less.

Keranos, God of Storms on the other hand continues to suffer from the banning of Splinter Twin. Although it still shows up in the odd sideboard, the format is too fast for a card like this to be in high demand. Something would have to radically change for this card to regain its lofty heights seen this past winter.

Speculators should be wary of holding onto this card as it looks set to go below 5 tix. I've sold my position in the portfolio this week though players should feel free to hold onto their copies.

Shadows over Innistrad (SOI) boosters look poised to dip below 2 tix in the next two weeks. Players should be holding only as many boosters as they can use and speculators should be avoiding holding any boosters at the moment.

There will be another price drop when KLD is released. At that point, there's a chance for a short-term bounce, but the long-term trend is down. This set is destined to follow the path that BFZ boosters have trod, which are still languishing in the 1.0 to 1.2 tix range.

Elsewhere, Eldritch Moon (EMN) boosters are holding around 4 tix, and OGW boosters are likewise holding at around 3 tix. Both will see drops at the end of the month as players look to sell boosters in order to enter KLD prerelease events and to buy the new cards. If you have any excess tix at that time, these should both be considered good short-term plays; low risk and low reward, but a safe store of value.

Edit: After publishing, it came to my attention that a subtle change in payouts for the new draft leagues will have an impact on booster prices. Draft leagues start on September 7th, 2016, and WoTC has modified the prize structure in the 6-2-2-2 payouts in order to help balance the supply of boosters. The new payout will not be two draft sets to first place, but will instead be 5 EMN boosters and 1 SOI booster. This means that the structural difference that favors the prices of EMN boosters will be removed, at least for draft leagues. If WoTC switches other prizes structures in a similar way, this will support prices on SOI boosters down the road. This is worth watching but not actionable at the moment.

As usual, the portfolio is available at this link. This week I sold my Rise of the Eldrazi (ROE) boosters for a modest profit. The strategy of buying up boosters in advance of their flashback draft has turned out to be only marginally successful. I would put this down as a good way for players to lower the costs of playing, but not a great strategy for speculators.

Speculating on boosters requires a high volume for it to be worthwhile since the cost of each booster typically is below 3 tix. It is hard to sink a lot of tix into boosters that are not from the current draft format. Bots also typically sell only one draft set at a time, meaning the transactions themselves are quite tedious.

To top it all off, demand for flashback drafts is typically a small fraction of demand for the current draft format. This means buying and selling boosters has a large effect on the market, whereas normally it would cause barely a ripple. Exiting a large position of flashback draft boosters will be difficult given the lack of liquidity in this aspect of the market.

All in all, it's a niche strategy that I won't be pursuing in the future. Again, for players that are seeking to lower their costs, a draft set or two bought in advance will shave a few tix off of the costs of drafting. A reminder that this strategy will only work for boosters drafted in triplicate, and for boosters that are 2.7 tix or less.

Return to Ravnica and Gatecrash are both below 2 tix at the moment. These sets will be drafted in December so players keen to revisit these draft formats should salt away a draft set or two now in order to take advantage of the discounted booster prices. With a flashback draft entry fee of 10 tix, the product plus tix entry fee is roughly 8 tix at current prices.