We need to do something. The unfortunate thing is that depending on the format, we are severely limited with what we can do. But never fear, there are always options!

Graveyard Decks in Every Format

If you’ve noticed lately, graveyard shenanigans have been dominating in multiple formats. Let’s take a look at how players are utilizing their graveyards for their benefit. We will start off with Legacy.

First up we have Red-Black Reanimator. This version differs quite a bit from the typical blue-black build. The creature choices overlap a bit with cards like Griselbrand but differ greatly in the rest of the deck. By adding red instead of blue we gain some additional discard outlets, which helps streamline the deck towards achieving its goal. I played against this archetype twice at Eternal Weekend and it seems like it's catching on in Legacy. It’s definitely not the most expensive deck in the format and may even be one of the more affordable options.

The main threat of the deck, Chancellor of the Annex, can help you out against your opponent as well. I know when I played against this deck, that card impacted my game plan quite a bit. Your choices against the white chancellor are to let your first spell get countered or to wait until you can pay the extra amount for your spell, thereby slowing your game down drastically. Neither option is good for the opponent. Chancellor of the Annex is no longer bulk thanks to this deck, so nab some copies cheap if you can find them.

Next up, we’ll move onto Modern from this past weekend.

Since Golgari Grave-Troll was unbanned, players have been working with this strategy to try and find the right build of the deck. It wasn’t until Prized Amalgam was released that the archetype really gained traction in the Modern format. Now that the deck has been around for a little while, most players would consider this deck an important part of the format. Despite being essentially a combo deck, Dredge in Modern has a lot of lines of play as well as great sideboard cards.

The card that stuck out to me in this deck was actually Collective Brutality. This is not the first time I’ve seen this Standard card being used in Modern. It actually has a ton of utility for Dredge – you want to be discarding, so you may as well get some added benefits from doing so.

Green-black has many different archetypes associated with it in Standard right now, and Delirium is usually at the top of that list. This deck reminds me a lot of Jund. There are plenty of great threats as well as ways to disrupt your opponent. You can combine those things with some removal for a great midrange strategy. This deck is dominating the format right now, and if you expect to succeed in Standard, you’d better be prepared for it.

Preparing to Battle the Undead

Most of the ways you can prepare for these strategies are by knowing they exist so you can determine a game plan to beat them. One important factor is to focus some of your sideboard spots towards mitigating the graveyard threat to whatever level you can. 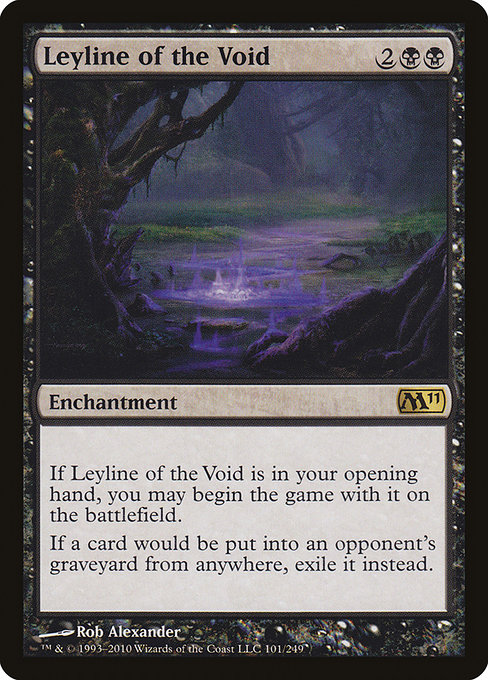 In Legacy, we don’t mess around. We submit decklists with four copies of Leyline of the Void or make room for Surgical Extraction. Lately, though, I don’t think players are taking these graveyard strategies as seriously as they should be. Most decks I see are devoting just one or two sideboard slots toward stopping graveyard strategies like those I’ve outlined above. Simply put, that’s not good enough. If you hope to defeat decks like these, start sideboarding with severity against them.

In Columbus, I ran four Leyline of the Void and a Relic of Progenitus as my dedicated hate cards for those Legacy matchups. The fact that I had five cards ready to bring in against decks like this was a huge boon and helped me win many matches. If you want to have good matchups against these decks, start sideboarding with this thought process in mind.

Legacy is one story, but what about Modern and Standard? Legacy players typically have a game plan for graveyard decks because there are so many of them. In Modern and Standard, though, we don’t always have to worry about strategies such as these – but right now we do.

Modern Dredge isn’t going anywhere. If anything, it’s gaining supporters. Not only that, but we face other commonly played cards that use the graveyard to their benefit like Snapcaster Mage and Tarmogoyf. Yet with all these cards seeing play, no one is fighting against them. Not only do we have Leyline of the Void and Relic of Progenitus like I mentioned above, but we have other powerhouses like Rest in Peace.

Standard is another story altogether. The main problem with Standard is that there aren’t great ways to fight against these graveyard-centric decks. There just aren’t very many options for that type of effect. Maybe it’s time for a little Shamble Back action in our decks, though. Or maybe we could rely on Descend upon the Sinful to clear the board and stop the follow-up plays, but that card is probably too slow.

Once we start seeing cards from Aether Revolt, one of the first things we should look for is graveyard hate, because it will change the format immediately. Well, that is if players actually adopt it into their sideboards. My thought process is that we have to start taking these decks as seriously in Modern and Standard as we do in Legacy. Surely they aren’t as potent as in the older format, but they are certainly great with respect to the other decks in their respective formats. 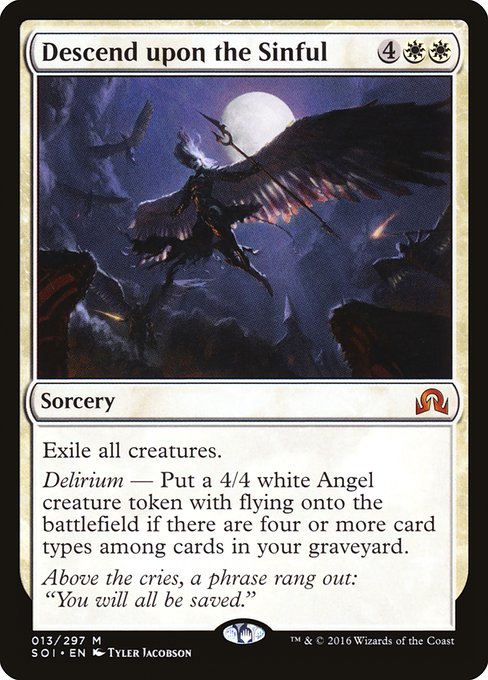 Because I think there will be an uptick in the amount of graveyard hate seeing play, I advocate picking up some of these cards now. Especially if you don’t own these cards already, they have nowhere to go but up – with the exception of the always-present risk that they get a reprint. Even if you already own these cards, now might be the time to start acquiring some extra copies. There are plenty of great options for Modern and most of them do double duty in Legacy as well. I think of the cards I’ve mentioned today, Leyline of the Void is my favorite because it can fit in any deck.

That’s all I’ve got for today. What are your thoughts about graveyard decks in these formats? Are they really taking over? How many slots do you usually dedicate towards these matchups when you are building your deck? Let me know in the comments and let’s work together to defeat these decks!