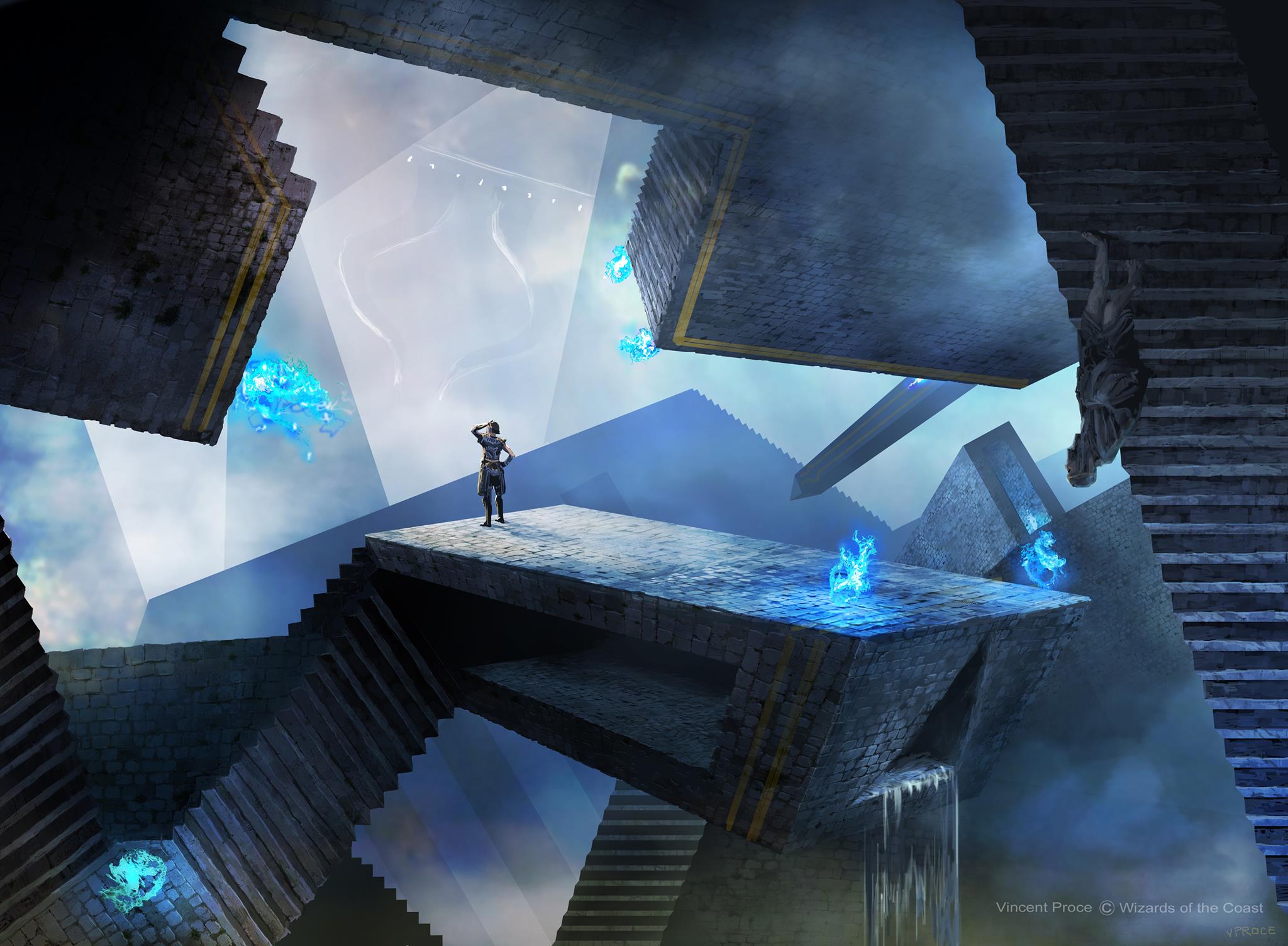 That's a good title, and you know it.

So I kind of do this every single set, and I've gotten a mostly positive response so far. For those of you who are new to Insider or to my content in general, I try to provide a comprehensive guide to all of the commons and uncommons that you should be saving and scavenging for at the prerelase this weekend. While there are tons of "financial set reviews" nowadays, they mostly focus on the chase rares, mythics, and Masterpieces in the set. This article is for the readers looking to maximize the value of every penny, and those who want to know which non-rares to set aside when cracking their boxes or cases. Even if some of the cards referenced in the article are only going to be dimes, I'm here to show you how to squeeze every ounce of value out of the set so you don't miss out on anything.

The cards I'm going to reference in this article fall into one of two categories. The first I'll call "blueprintable," named after the Blueprint owned and operated by Thomas Dodd of Card Advantage. If you have the free time and resources to set sort and alphabetize your bulk, here's where you'll get the most bang for your buck on all the 3- to 75-cent cards. These are the Soul Wardens, Vampire Nighthawks and Deathreap Rituals of the set. While Fatal Push is a known commodity, we're going underneath that.

The second type of card is more for the readers who need to build up their collections and don't have any intention of shipping 10,000 Magic cards across the country. These are for the player who doesn't own enough cards to fill a trade binder, but still wants to be able to maximize value in a room full of $1,000 decks. When I first started playing competitively, I ground out value at the LGS by learning that it's important to have the Hada Freeblades in my binder for the guy who needed them for his FNM Allies deck. (Yes, that card is a blueprint card today. In 2010, it was worth nothing). These are the Attune with Aethers, Glimmer with Geniuses, and similar Standard/EDH gems that players just don't have on hand but need now.

With the introduction out of the way, let's get going. 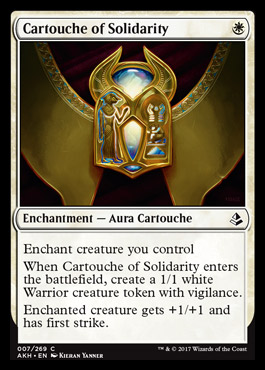 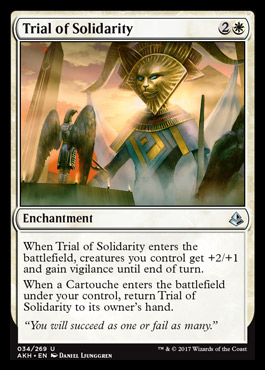 We're going in the order that Mythic Spoiler has listed, so I'll get this out of the way right now. I don't expect any of the Trials or Cartouches to be Constructed playable, and they won't find homes in the hearts of casual players either. I'm sure they play well in Limited and make the Sealed/Draft environments richer, but I don't plan on picking any of these out of bulk. I'll leave them for the Craigslist lots and bulk sales at the store. 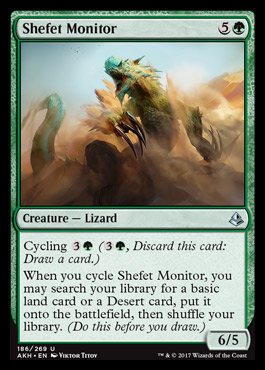 I had to read this card a few times before I was confident that it played the way I wanted it to. While I don't think Deserts will have an impact on Standard, this big lizard screams Commander playable to me. For those of you who like playing Krosan Tusker, I think you've found your permanent replacement. This thing puts the land into play for just one more mana, while also drawing a card. While I don't think this replaces Cultivate or Kodama's Reach in the more streamlined decks, it certainly has its own niche because of the body that tags along with its cycling ability. It slots into Animar, Soul of Elements nicely, and can simply be reanimated later. I expect this to be blueprintable for 10 cents in a few months, once people start to play with the card. If you need filler in your binder, you can easily throw this into a trade at 50 cents and grab a couple playable bulk rares. 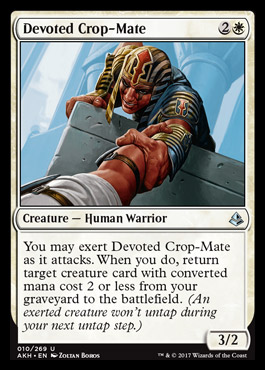 I think this easily has the power level to see play in Standard, assuming some shifts happen to Disallow the Saheeli combo from competitive play. While I wrote about how I felt that Always Watching was a gimmick that I feel we should sell out of (and I still feel that we should be exiting that card and enjoying our profits), I also think this weenie is the kind of card that gives that deck an actual chance in Standard. And you know what? Even if it doesn't crush the top tables, you'll probably find a couple people at your LGS looking to build that exact deck. Have these in your binder on the same page as Always Watching and activate your inner salesperson. 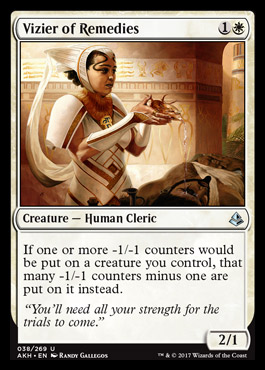 Devoted Druid has everyone talking about this card, but I'm not expecting it to see play as a four-of or anything. It kind of adds another dimension to Melira, Sylvok Outcast in that deck, but those decks play Collected Company and Chord of Calling, so they don't need to play extra copies of stuff. Still, though, this could easily be the backbone of a budget Modern deck or have some casual attention. Keep them in your binder and move them at 50 cents. 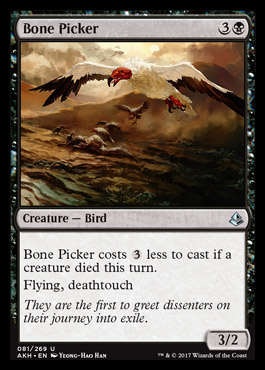 This is the "pushed" card of the set, that they intentionally made look strong to hype up the power level. Is it really the black delver? I have doubts, considering you can't cast it on turn one without significant investment or shenanigans (Walking Ballista for zero?!?! Valuetown..). These are pre-selling for $1.50 to $2, and I don't think this card is even a third as good as Fatal Push. It's also not going to be as good as Delver of Secrets, who is around the same price point with lower supply. Sell. 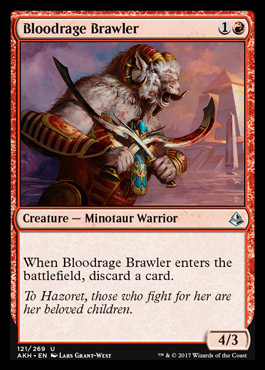 Competitively viable? Not while Fatal Push and friends are around. However, this feels like a very Vexing Devil-type card, where less-invested casual players look past the downside to dreams of slamming this for one mana off an empty hand with Ragemonger. Pick 'em, you'll be surprised how well these trade off or buylist in the future. 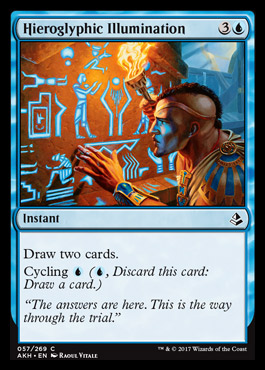 Google Chrome says I spelled that right on the first time. Hell yeah. I think this has legs, matching up with my belief that Drake Haven is an incredibly powerful card. It's a common, so you won't need to be buylisting these for anything more than a nickel, but just keep a playset in a sleeve of your binder for the player building the Drake Haven deck. I believe it could be a three-of; probably only a 3-cent card and not super worth blueprinting, but nice to trade out a set at a dollar. 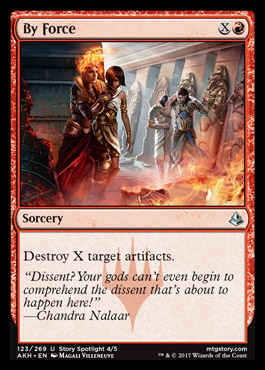 Meh; I don't feel very strongly about this card, but it could be a sideboard player for red decks to keep a hold on Mardu Vehicles. Not super buylistable, but worth keeping an eye on. 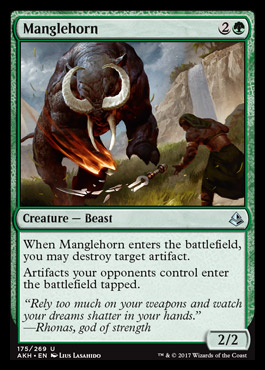 I like this one a bit more, because it also happens to get in the way of Saheeli combo. Of course its' utility gets lowered if Felidar Guardian gets banned, but you can bet that there will be players looking for these during the prerelease. You can probably trade one away for a few casual favorite bulk rares, even if it's not a buylistable card. 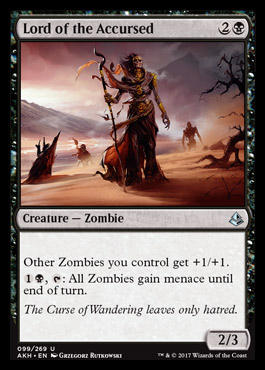 Uncommon Zombie lord number one billion! Obviously this isn't on the power level of Lord of the Undead or Death Baron, but I still expect it to find a home in many a casual deck. Probably doesn't see Constructed play, but most of the cards on the Blueprint don't. Pick these for sure. 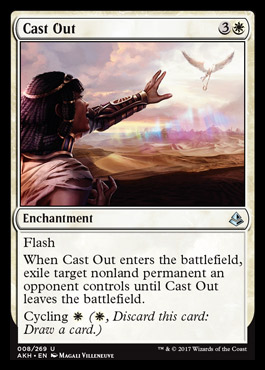 Not quite Stasis Snare, but you'll have people who want these as a catch-all answer. Not a whole lot to talk about, but I'd rather have these on hand than sitting in a 5k box when asked for a couple copies. 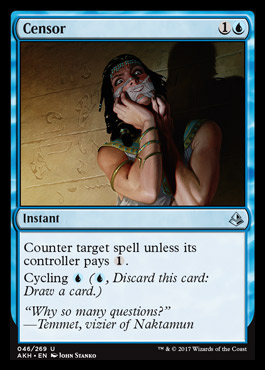 I think this card is criminally underrated, or at least it was when it was spoiled. While I know a lot of people were expecting Miscalculation 'cause nostalgia, this card is very powerful. It's already preordering for $1, so don't let people call it a bad Force Spike while expecting to get it off you for free. It's super bad in Limited though, so scour those draft tables for extra copies. 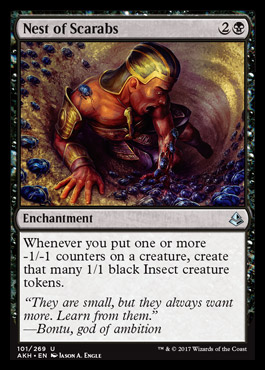 Honestly? This is hands-down my favorite card in the set. I loooove spreading -1/-1 counter shenanigans, and I have a Skeleton Ship Commander deck to show for it. Did you know Crumbling Ashes and Blowfly Infestation are worth a billion dollars each? Of course you do, you read my articles. What about Kulrath Knight? Yeah, I thought so. It's an uncommon from Shadowmoor, which means there are like nine copies in existence. Seriously though, this card will be worth 25 cents on the blueprint, easily. It won't reach the level of the others because of the difference in scarcity, but still. 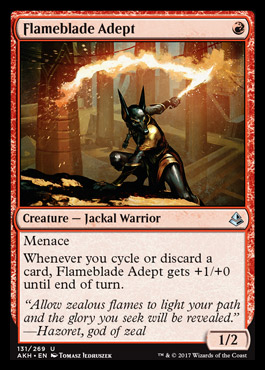 If the format gets turned on its head by a banning, expect aggressive decks to become favored in an unknown metagame. You don't get much more aggressive than this, and any deck running this wants four. Keep them put aside for the local mono-red player, and trade them at $1 to $2 a playset for relevant cards that could go up in price. 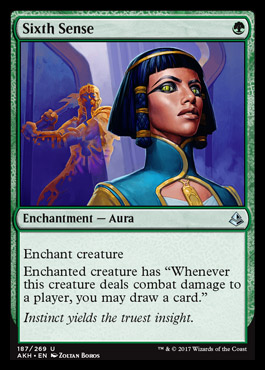 Want to know what Keen Sense is worth? It's like $2.50. While it jumped a few years back due to the cute use in Bogles, that deck has all but died out of the Modern metagame; we just don't see it anymore. Keen Sense has dripped down a bit to compensate, but it still gets a ton of love from casual players who want to draw cards by attacking with creatures. While Sixth Sense is slightly tuned to prevent silly shenanigans (Walking Ballista...), I still expect it to be blueprintable from a casual perspective. Not going to see Standard play either, which means you can probably find these on draft tables. 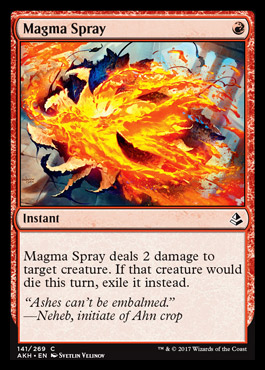 Is it just me, or does it feel like this was just printed in Standard? Apparently the most recent printing was Journey into Nyx, but whatever. This isn't buylistable, but trade them at quarters to the people in the shop who didn't plan ahead and need them on that very night. It's just a nice thing to pull so you don't have to pay quarters yourself, even if you're just picking up a playset that you didn't acquire during Theros block.

So that's all for my common/uncommon set review. Did you see anything I missed? Disagree with one of my picks? Let me know in the comments section below. This is the first set that I'll be cracking a case of for my own personal sets, so I'll actually have bulk to pick through on release day instead of just waiting for others to sell me their bulk.