Another week goes by, and Izzet Phoenix continues to tear through the field. MagicFest Bilbao's main event was taken down by Guillaume Matignon, while MF Tampa featured four Izzet Phoenix decks hitting the top eight. The conversation around Faithless Looting is starting to get very real, and I'm thinking we'll see a reaction from Wizards sooner rather than later. The shell of the deck is already incredibly powerful, but this weekend featured some innovations and branching decklist decisions that I'd like to highlight. As well, I'll be reviewing cards that saw play this weekend that may be primed for movement in the coming weeks.

I'll note here that a few of my picks will be very closely tied to the legality of Faithless Looting, and an emergency ban could very well be imminent. As always, speculate at your own risk. 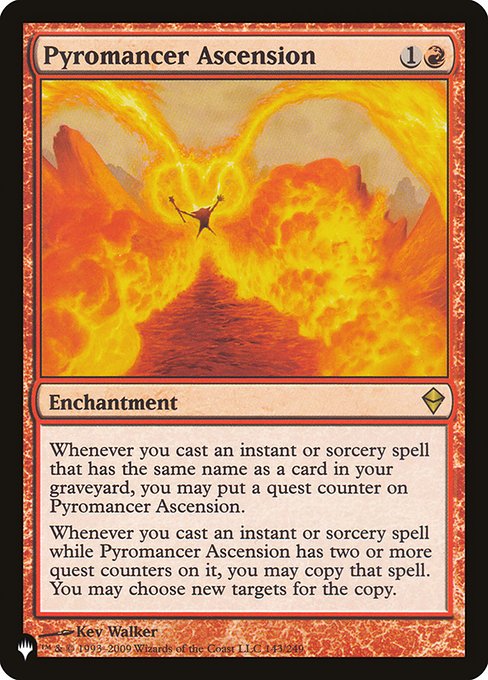 This 1R enchantment saw play as a two-of in Guillaume Matignon's winning list from GP Bilbao. Movement on this card has begun and could settle out to be a $10 card by the end of the month. This card was previously a big part of UR Storm lists in Modern but has since fallen out of favor given the speed of the format. This weekend proved that there might be room for reconsideration for this card. There are few better feelings in Modern gameplay than casting Manamorphose and getting a copy of it put on the stack.

Modern Masters 2017's printing of this card tanked its price to the floor, with many available under a buck. Near Mint copies can be had for around that price on TCGplayer if you don't mind paying a little bit of shipping. I believe anything under $3 will make it a solid pickup.

One of the standout cards of the weekend, and one my favorite cards of all time, Snapcaster Mage! This innovation was shown in the four different decklists from GP Tampa, appearing as a two-of in all of them. The Phoenix decks are said to be so good, as they have the ability to change roles in each matchup as need, and often mid-match. Snapcaster Mage allows the deck to rebuy key spells in longer games, and is at worst an Ambush Viper to pressure your opponent's life total. Snappy is just coming off a recent reprint in Ultimate Masters, albeit at mythic.

Non-foil copies are available around the $55 to $60 price point and will definitely not stay there for very long. It wasn't that long ago that we saw $80 copies of the Innistrad printing, and while I don't think it will ever eclipse that, the card might rest somewhere around there should it continue seeing play in Arclight Phoenix and Death's Shadow strategies.

Speaking of expensive blue cards, Jace, the Mind Sculptor has definitely earned a spot in the Izzet Phoenix Sideboard. Not exactly a natural fit in the normally aggressive strategy that Izzet Phoenix is going for, but perfect for playing longer, drawn-out games against grindier matchups. Like so many UR spell decks before it, hitting the pocket of lands after cantripping several times is usually a death sentence. JTMS can play a big part in fixing that when you've got fetchlands available.

Jace is already under a lot of pressure in a time where all planeswalkers are being scrutinized as more information about War of the Spark becomes available, and could easily pass that $100 mark it is currently sitting at. Many feared that this was the inevitable future for the most powerful planeswalker ever printed, and their fears were not unfounded.

The two mana flip-walker showed up in the sideboard of Roshen Eapen's GP Tampa winning Death's Shadow list, and I think this may spark some price movement. This card recently showed up in the mainboard of the Legacy version of Death's Shadow to a high degree of success, but it is every bit as powerful in Modern. The lower land count of this deck doesn't usually support playing grindy advantage planeswalkers like Jace, the Mind Sculptor or Chandra, Torch of Defiance, making JVP post-board a solid choice for games that go longer. This card pairs well with Snapcaster Mage, and can be incredibly helpful against go-wide strategies that Death's Shadow classically has struggled with. JVP sits at $15 at time of writing for the Magic Origins and From the Vault: Transform printings.

While it may feel like it, Izzet Phoenix isn't the only deck to play. One strategy that has an easier time than most against Izzet Phoenix is starting to post up better results.

Whir of Invention prison decks are beginning to emerge as the most powerful Ancient Stirrings decks in the format. While the namesake card doesn't have much going for it as a rare in Aether Revolt, a very high-supply, highly opened set, the cards it fetches up are more significant players to watch in the market. Mox Opal, Ensnaring Bridge, and Chalice of the Void comprise the core of expensive cards the deck has playsets of. We're getting to be pretty far out of their most recent printings, and I expect to see the steady upward movement on all three to continue.

The most interesting pieces of the deck are found in Spellskite and Academy Ruins. Spellskite is the best answer to post-board artifact hate outside of Stony Silence, and can absolutely win the game for you by protecting all of your precious lockpieces. Academy Ruins is sort of a sleeper pick for me, but I think it has a lot of room to grow. Copies of both of these cards are starting to dry up on TCG Player, and both may be on the precipice of a price spike. 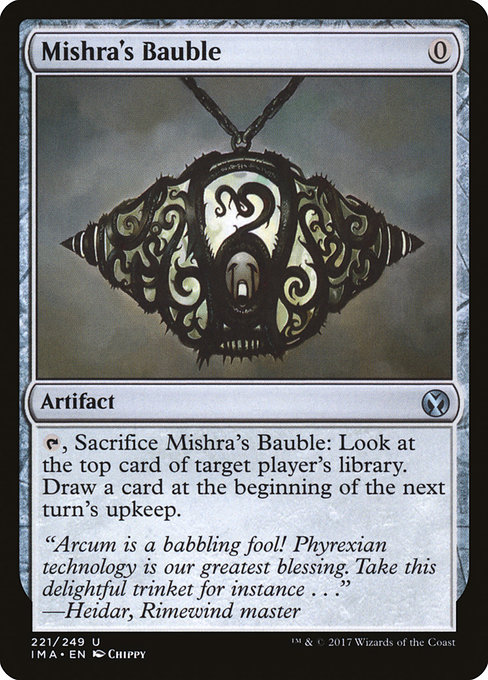 This card has found a home again in Whir Prison and Death's Shadow, and is probably underplayed for how powerful it is. Zero mana cantrips that provide extra information are solid inclusions to any deck that wins with a very small number of cards. I think Death's Shadow abuses this effect best, as it can inform your decision making for future turns, and is also in the same deck as Street Wraith. It slow-trips, giving you the card on the next upkeep like many of the Ice Age spells, but is at its best when paired with fetchlands for the pseudo-scry effect. Its Iconic Masters reprint pushed it farther down from its previous absurd $40 price tag, but we may see a slight rebound into the $10 range should it continue to contribute to the success of Shadow and Whir Prison decks.

Bring It on Home

Modern is in a weird place right now, and it's likely things are going to change in a big way. I feel like all I've been talking or thinking about is Modern for the past few weeks, and deservedly so. Previously I was pretty confident Wizards was going to take a hands-off approach until Modern Horizons dropped. Now I'm not so sure. I'm just holding on and going along for the ride.