For those that might have missed my last article, I discussed briefly on how “extras” are going to have an impact on the secondary market. What I am referring to as "extras" are the showcase/extended art cards in new sets, debuted in Throne of Eldraine. Previously, I did not mention the positive impact they have on players. We will discuss both sides of the coin here today, and I hope that this brings you a little more insight into this topic.

Negatives of Extras for Speculating 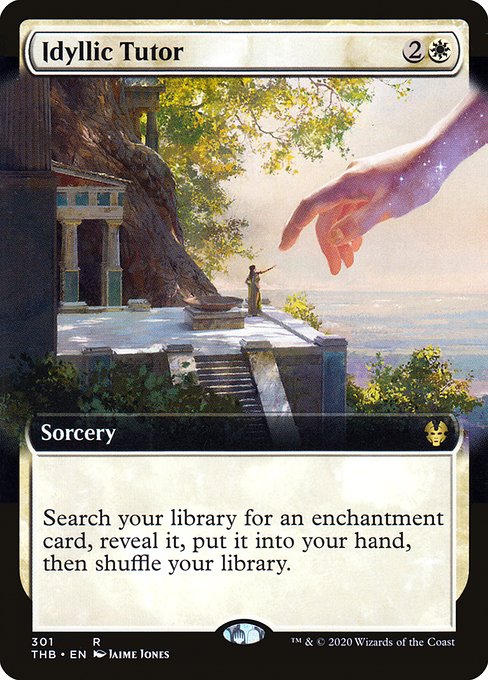 To start off, we are going to go over the potential negatives of extras. As we know, any time a card is reprinted, the original printing will typically not be worth as much as it once was. Put simply: the more copies of a card that come into existence, the less valuable that card becomes. This is a basic illustration of how an increase in supply affects the price of any given card.

Take Idyllic Tutor for example. The original Morningtide version tanked after the reprint. But, if we look at the originals price, it is currently $12.99 on average for the non-foil and $58.47 average for the foil copies. Fast forward to the Theros Beyond Death printing, and we see a vast difference in price. The current non-foils are averaging $3.81, and the foils are sitting at $5.04. Then we address the extended arts coming in at $6.95 for non-foils and $19.35 for the foils.

In just this one card, we have seven different printings. From a speculation standpoint (to me) this makes it a nightmare to determine what basket to put your eggs in.

Now, getting back on the pricing of the several printings of Idyllic Tutor you may be asking yourself, “what’s the issue here?” Well, I see the problem is this: those who look to spend bigger money on premium cards will likely not view the regular foil as the most desirable printing. They will look to the extended art foil instead, as it is far rarer and offers a unique aesthetic. This also overshadows demand for the non-foil extended art, making it less attractive to speculate on, in my opinion.

Why would a player spend extra for a non-foil extended art if it's just a non-foil? Personally, I would spend the extra for the foil version, and buy the regular non-foil art as my budget-friendly play option. Normal foils are just not the thing to put your money into when there is a more premium alternative. Stores will give more for prerelease copies or the extended art foil if you are looking to buy-list, leaving other printings in an uncertain middle ground.

Look back to the price difference between the originals and the new copies of Idyllic Tutor. Again, one might look at this as a non-issue. There's roughly a $6.00 gap from the non-foil extended (“more rare”) art and the original printings non-foil. One could argue that it is because the Morningtide copies are older and have lower supply. Yes, that is obviously part of it, but that is not the whole picture. It has to do with the overall amount of new copies. The new non-foil is a fraction of the old copy, which is a red flag for speculation.

A Card Without Extras

Splinter Twin has four total printings across two sets. The Rise of the Eldrazi is averaging $10.96 for non-foils and $33.91 for foils. Modern Masters 2015 copies come in at $10.31 for non-foils and $19.09 for foils. Does anyone notice the difference in pricing here? It is nowhere near the difference that Idyllic Tutor has with only the foil having a significant bump in price for its original printing. While this card's price is mostly propped up by speculation of its potential unbanning in Modern, it is curious that the most premium version has such a small foil multiplier compared to non-foil copies.

If you are looking to flip on the secondary market, the non-foil regular art is your “safest” option. Reason being is that budget players will always go to the cheapest option available. These copies will always be in high demand across the board. If a card pops in interest, the non-foil will go up in price to some degree. Some stores will even give a little more if they see a trend about to happen and want to be ahead of potential buyouts. These overall have great low risk, high reward outlook long-term.

Now, let's talk about the upside of all these extras being around! As a budget brewer, this is fantastic news as I can get the normal printings at a cheaper rate. Players like myself do not care about shiny cardboard and just want one thing, accessibility! Many players have lamented that Magic is progressively becoming too expensive. Fret not friends, as these extras are just what the doctor ordered! If Wizards keeps putting extras in sets, you will continue to get your non-foils at a great rate! As players open packs chasing Showcase variants of these cards, we reap the benefits, resulting in an overall non-foil.

Let us go down the rabbit hole a bit further and look at the latest set, Ikoria: Lair of Behemoths. Fiend Artisan demands the highest non-foil price of any card in the set at a $17.99 average. If this card did not have all the extra printings it would be worth a whole lot more! This is great for players trying to acquire great cards at a reasonable price. The lowest monetary mythic in the set is Snapdax, Apex of the Hunt with its non-foil printing averaging $2.15, which is extremely cheap for a mythic in a brand new set. The card is somewhat narrow, but is a potentially solid addition to a Mardu deck. Without the extras, it would certainly be worth more than its current price.

It is notable that we are experiencing an overall dip in the value of Standard cards in the absence of paper tournaments. Right now, we have an interesting opportunity to capitalize on lower demand for cards that have extra printings.

Most that are reading this follow things closely, but it is worth noting all evidence discussed above even if you do not agree with my argument. Imagine how prices will be affected if these new cards get reprints with another round of extras. From a budget player standpoint, I hope that Wizards will continue to print the extras to deflate non-foil value. From a speculation standpoint, I am going to play on non-foil and prerelease foils from here on with new sets. I hope this brought some insight to some of you, and I hope you enjoyed this week’s article!