We all like looking back and trying to gauge our success, and see where we are in terms of accuracy of our predictions and overall credibility of calls. I wanted to take this week and try and identify my strengths and weaknesses in calls so that I can do this better. I know I got some wrong, and I got some right, and lets see how it went overall.

I'm only going to look at how I've done so far this year, as that's when most of the major price changes have happened, and its also when insider began. 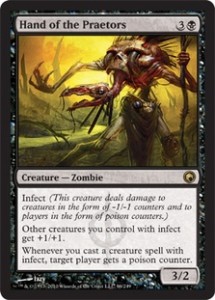 Not published too long ago, my big card to pick up here was Hand of the Praetors. Since then they haven't gained almost anything in overall value, and only have a market for casual players. Ah well, better luck next time.

Sell off the Jace, buy Green Sun's Zenith, and be careful about Tezzeret, Agent of Bolas! Well I sold Jace for $75 a piece to SCG, they are only buying them for $60 now. Green Sun's Zenith has doubled since I wrote that piece, and Tezz was a bigger hit than I anticipated. Not bad overall, and if you were careful about picking up Tezz you made a boatload of profit getting him near the prices I listed. I'd consider this one a win.

Looking back over this one, the cards either stayed where they were, or went up. Sword of Fire and Ice now sees a $50 price tag at its lowest, Goblin Welder was $6, and is now $10. A couple weeks after I published this article we also sent out an email saying to pick up the welder and a few other cards for the legacy welder deck. This article was a good win if you were able to pick up Welders or Swords.

Just after finishing my Building on the Basics series, I wrote this piece. While most of it is still practical trading advice, I  mentioned the two newer Mirrodin swords, and noted the continued popularity of decks containing Stoneforge Mystic. Those have all since gone up, though my Tombstalker call was a failure, as he has since dropped, but not by much. Overall a win, if even by a few dollars.

*Update!* between the time of writing and posting, Tombstalker has climbed in price, and is now sold out on SCG at $9.99 a piece. This I would now call a win if bought when I put it on watch.

Two weeks ago I wrote this one, saying to sell off Green Sun's Zenith, Games Day Black Sun's Zenith, and the new Mirrodin swords. The two Sun's I still stand by the call to sell, unless you want to hold onto GSZ for long term gains. The swords, however, I would now hold onto in the wake of the older swords hitting $50. It would be a longer term investment that probably won't hit $50, but they are more likely than not to go up.

Most of the other information in that article is still too new to have seen much change, so it will be evaluated at a later time. 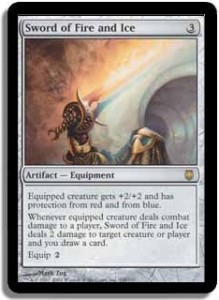 Chasing Down the Stag Published 16 March 2011

Last weeks article is still too new to evaluate, though it was published just days before the UB infect deck made the news at this past weekends Open. I would call this one a win, but it may be too early. As with Knowledge Pools, it will be evaluated at a later date.

So where does that leave me? A loss on Hand of the Praetors, possible loss on Tezzeret, Agent of Bolas if hesitation to pick him up stopped you from buying, a loss on Tombstalker, and I'll call an even draw on Jace, the Mind Sculptor since his price hasn't gone down too much since then.

Getting to positive wins, we have Green Sun's Zenith, Goblin Welder, Sword of Fire and Ice, and Games Day Black Sun's Zenith. Picking these up when originally mentioned was at least a 30% profit gain, more on some.

1 solid loss, 5 solid wins, and 2 unknowns depending on how you acted. After the update on Tombstalker the numbers are showing a positive gain and positive calls. A decent run so far for the year, lets see if I can keep it up and raise those profits higher!

This past weekend at the SCG Open Dallas/Fort Worth standard saw another round of red decks break the top 16, this time with Goblins making the finals, sadly to lose to Esper-Blade. Goblin Chieftain gained a marginal amount, as it's never been very expensive, and Goblin Guide held steady in price even against the addition of more into circulation from the event deck that he's in.

Vengevine returned again to the scene as well with the support of its Naya friends. The price didn't do anything interesting as most people who want them already have them, though continued use and decent finishes could help its price.

On the legacy side of the Open, Tezzeret Affinity managed to win it overall. The current card to be on the watch for is Blinkmoth Nexus as it could see a spike in the near future if the deck does well this weekend in the Los Angeles Open. Mox Opal was also included as a 4-of in the affinity deck, showing decent possibilities of it seeing a further price bump as its also used in Spanish Inquisition, and still finds some use in Standard and Extended. 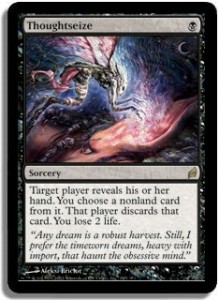 Thoughtseize seems to be here to stay even after extended, as Legacy continues to gain popularity, so will cheap efficient spells. With extended cards about to drop heavily in price, keep watch for people getting rid of Thoughtseize for criminally low prices, and pick them up before legacy demand raises their price again.

That's all for this week, I hope you enjoyed reading this piece as much as I did writing it!

3 thoughts on “Past Reflections – Eating My Crow”