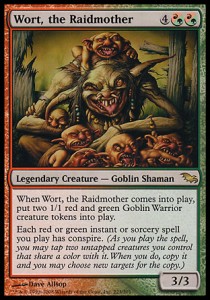 My last couple articles have focused on trying some new things in Commander, mostly involving blue- and black-centered three-color combinations. This week we return to my comfort zone with a sweet red-green deck submitted for review on Twitter.

This particular list was submitted by Uriah (@CMDRDecks on Twitter.) If you haven’t checked out his youtube channel, be sure to take some time to do that. There are all manner of interesting decks on there, with new ones coming in every week!

A few weeks ago Uriah asked the twitterverse for help with a Wort, the Raidmother deck that he’d been working on, and it seemed like a great opportunity to spend a few articles looking at the process of refining an already established deck.

The goal here is not necessarily to make the deck more powerful, but rather to tweak it so that it plays out the way you intended. Let’s start by taking a look at the list as-is and determining the identifying characteristics that make the deck unique.

Typically, Wort decks operate using one or more of three engines: conspired spells, token generation and Warp World. Each of these engines operates differently and requires different setup cards, though there can certainly be some overlap.

This particular deck is pretty token-heavy with a tribal Goblins theme. We’ll be sure to stay true to that intent as we modify the deck.

In his email Uriah said that he wanted to push splashy spells that interact well with Wort, which is one of a few things this deck isn’t really capable of right now.

Looking at the list, you can see the only spells to conspire are Tooth and Nail, Warp World and various X Spells as the top of the curve. Of those, only the X Spells and Warp World really count, since this deck can pretty much win the game on the spot with a resolved Tooth and Nail for pieces of the Lightning Crafter combo.

With that said, let’s break down the list by function and make some changes along the way:

As with many Commander decks, the ramp suite is one of the most important parts of the deck. As you’ve built around the idea of always having access to your commander, you’re going to be at a severe disadvantage if you can’t get it into play in a timely fashion.

Here’s the ramp that Uriah is currently running:

Personally I think that this is a good quantity of ramp, but the wrong kind for accomplishing what this deck wants. In general I want efficient spells like Rampant Growth that are going to enable as many turn four Worts as possible. This means a high density of two-mana ramp spells.

The second kind of spell I want more of are those that benefit a lot from Conspire such as Explosive Vegetation and Far Wanderings. These cards are fine on their own, but they become insane when you conspire them and play into the splashy spell theme that Uriah is looking for.

The last kind of ramp spell I want are the ones that interacts well with the other themes of the deck. For Artifact or Equipment decks this might mean efficient mana rocks, but for this one I want cards like Primal Growth and Perilous Forays that can turn your tokens into a more tangible resource when necessary.

The changes to the ramp package are probably the biggest changes I’m making to the deck overall:

I’d like to fit more two-mana ramp spells in here, but I think that these give you the most explosive potential early while also letting you go over the top in the late game.

Goblins are the major subtheme of this deck, and its the part I’m most excited about!

This theme really ties together all of the strategies that Wort decks tend to push. You have a bunch of creatures that generate Goblin tokens so you can copy your red spells. Those tokens are awesome for spells like Warp World and you have a few giant spells that make a ton of Goblins to round it off.

I think most of these cards carry their weight pretty well. Most of them are reasonably sized (for Goblins, at least) and provide some type of utility effect ranging from marginal to game-breaking. That said, there are two cards that jump out as significantly underpowered, as well as a few that seem to fall just short.

The first card that seems out of place is Ember Hauler. I can see this little guy being awesome if you frequently play against the likes of Azami, Lady of Scrolls or Jhoira of the Ghitu, but I think Gempalm Incinerator will generally be better since it cantrips and scales up over the course of a game.

The second card I’m not a huge fan of is Dragon Fodder, which has a pretty marginal impact. Granted, it sets up Conspire and can itself be conspired later on, but I think that Empty the Warrens will have a much higher upside for a minimal additional investment.

The rest of these cards seem mandatory for this style of deck since they’re pretty much all of the best Goblins. I would like to fit in Goblin Lackey to go with Warren Instigator, but I think we’ll have to look elsewhere for cuts to make that happen.

One thing that I really like is that there are two creature-based sources of haste for your Goblins in Goblin Warchief and Goblin Chieftain. This means that you have the potential to Warp World into a billion tokens with haste, which seems like exactly the kind of splashy play this deck is all about.

Going over the Top

Wort decks generally win the game by resolving the biggest spells at the table multiple times. I’m a big fan of this strategy since it synergizes with the massive amount of mana this style of deck is capable of generating.

Besides the obvious inclusions, there are a few choices here that are specific to the deck’s subthemes such as Shared Animosity which goes along with the tribal theme.

The only card I’d be unhappy to play is Mycoloth. He interacts well with both Doubling Season and Parallel Lives, but beyond those he’s pretty vulnerable for something that you’re going all-in on. I’d rather have a card like Genesis Wave, which is a redundant copy of a Warp World effect as well as one of the most powerful effects in the format.

This is sort of the “everything else” of the deck, and it covers a lot of bases. You have a ton of creature-based tutors, and ways to abuse enters-the-battlefield abilities. There’s some amount of card drawing, sacrifice outlets and answers to different types of permanents.

These cards need to do an awful lot of things. In general they do a pretty good job of it, but there are a few changes I’d make for the sake of personal preference.

The first thing I would change is to cut Hibernation’s End. As sweet as this card can be, especially for decks that can go up the chain, I would rather have an effect I have more control over. A good replacement might be Birthing Pod or a one-shot tutor that requires jumping through fewer hoops.

The next change I would make is to swap Chandra Nalaar for Chandra, the Firebrand. If we’re looking to amp up the spells then this seems like a pretty simple change to make, since Chandra’s power scales directly with that of the spells you’re copying.

Next, I’d cut the expensive cards that provide narrow effects (Into the Maw of Hell) and the cards which require extra support to function (Master of the Wild Hunt). I’d also cut Swiftfoot Boots and Lightning Greaves since the deck has enough ramp and sacrifice outlets to protect yourself from targeted effects and recast Wort without too much trouble.

With those four slots freed up we can add Anarchist for additional recursion and to power up Heat Shimmer and Warp World. Next, I would add the Goblin Lackey I was trying to fit in earlier.

The last two slots go to Regrowth and Vengeful Rebirth, which will give you some inevitability in the late game. If the game goes long enough, you can conspire one Regrowth effect to recur a good spell and a second Regrowth. This lets you create a game state where you never run out of gas, one of the problems these decks generally struggle with.

The last three cards I want to fit into the deck are Reiterate, Electropotence and Hull Breach. Reiterate is a flexible card that generates card advantage and gives you access to effects that Red typically does not have. It is especially powerful in a ramp-heavy deck.

Electropotence is a card that I think is really good in conjunction with the Genesis Wave and Warp World effects that this deck is built around. These let you control the board after you resolve one of these effects, or just kill someone if you can put enough Goblin tokens into play at one time.

Lastly, Hull Breach is an effect this deck is lacking. There are a ton of ways to answer artifacts, but not so many to deal with problematic enchantments.

In order to make space for these three cards I would probably cut Green Sun’s Zenith, Fatal Frenzy and Recoup. Recoup is outclassed by the interactions between multiple [card Regrowth]Regrowths[/card], Fatal Frenzy seems out of place, and Green Suns Zenith has surprisingly few targets.

And finally, let’s take a look at the land situation:

The only thing I don’t like about this manabase is the amount of colorless and “enters the battlefield tapped” lands. Neither of these were as much of a problem before the ramp suite was changed from artifacts to green sorceries. If we just change a few of these lands to basic forests everything should be ready to go.

I hope that Uriah gets a chance to try out some of these suggestions and lets me know how they work out. Overall I think this is an interesting direction to take Wort in. The Goblin theme is an interesting deck-building constraint, and it seems like a ton of fun to play with. I’m pretty excited to hear how it turns out!

Next week I continue digging through my email and take a look at a Dralnu, Lich Lord deck. Dralnu is one of my favorite Commanders and was actually one of the first decks that I built, so I’m excited to give him a fresh look with some of the new cards from recent sets!

I'm a Commander and Cube enthusiast who occasionally delves into more competitive formats. My focus is on keeping things fun over anything else! I'm glad to talk about just about any format, so get in touch via Twitter or email!

Facebook
« The Return of the Prediction Tracker
Insider: How to Find a Bargain »