Many cards hold their value for a variety of reasons. Dual Lands are valuable due to their unmatched power in Legacy. Strong Planeswalkers such as Elspeth, Knight Errant are valuable because of their versatility across multiple formats. And of course the Power 9 and other Vintage must-haves are icons representing the most valuable of Magic: The Gathering cards. 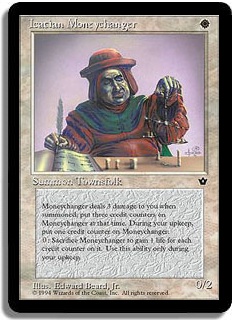 A collection of these cards is nice to have. But a collection of cards is only worth what one could get in cash for it. The old adage “cash is king” is a mantra I live by when dealing in Magic Cards.

Many of my Twitter followers have seen me use this phrase before, and it is the basis of this week’s article.

Everyone knows the value of Dual Lands, Force of Will, Jace, the Mind Sculptor, Bazaar of Baghdad, etc. Cards like these have been played ad nauseam and no one needs reminding that these are as good as cash. Even cards like Zendikar Fetch Lands, while printed more recently, are well-recognized for their cash equivalency.

But what about cards that don’t see the same scale of play or attention? There are many Magic Cards which can be readily converted to cash, yet don't reach the same levels as Legacy and Vintage staples. These are the cards that are difficult to find in many trade binders, yet the players who possess these cards may sometimes have trouble moving them because they are less glamorous.

The result is an opportunity to acquire these cards close to their cash value. These cards could then be held for a period of time in hopes of slow value increase, or they could be sold quickly for some easy dough.

Which cards should we be looking out for? There are too many to name, of course, but I will try and give a couple examples across multiple price ranges. These would be great cards to keep an eye out for when trying to equalize value in a trade.

Let’s start small. I mean very small, as in cards that are as good as cash yet are worth less than one dollar.

One that many tend to overlook is the inevitable “junk rare”. These are the Timesifters/Grindclocks/Need for Speeds of the world – the cards that can be acquired by the dozens at less than a quarter each with minimal effort.

Do not be fooled by their ample supply. These forgotten rares are money simply because retailers will pay a flat amount for them, normally in the ten to fifteen cents range. And when people are looking up cards on TCG player to value them, picking up the occasional Timesifter valued at $0.13 (which can often be rounded down to a dime) may not be the worst idea.

Another up-and-coming example of a set of cards which are easy to sell for cash is the Zendikar full art land. While there are many in existence, these lands are slowly fetching more and more cash at auction. Some players may be thrilled to unload a bunch of lands for a Standard card – it may not be a bad idea to oblige them!

As we slide up the price scale to cards worth a couple bucks, we have available an endless list of cards that easily sell for cash. But rather than delve too long on this topic, let me instead direct you to an all-inclusive series of articles already available on this site: Doug Linn’s Hidden Treasures Set Reviews series (listed below, from an upcoming "Start  Here" Insider page we're compiling).

Within, Doug highlights the many overlooked cards in each set which are convertible to cash (timestamped according to when the article was published, of course):

The magnitude of cards which fall into this price range is incredible. When I started playing Magic, I was thrilled to own a couple cards worth double digits as there weren’t many outside of the unobtainable cards in the original few sets. Nowadays, every trade binder out there seems to have at least a few of these since they are available in every new set.

But some cards in this price range, which can be readily converted to cash, are less popular and therefore may be easier to acquire in trades closer to cash value.

One of my favorite examples is a pair of Vintage-legal cards that do not see as much play as they once did: Tolarian Academy and Vampiric Tutor (charts courtesy of blacklotusproject.com). 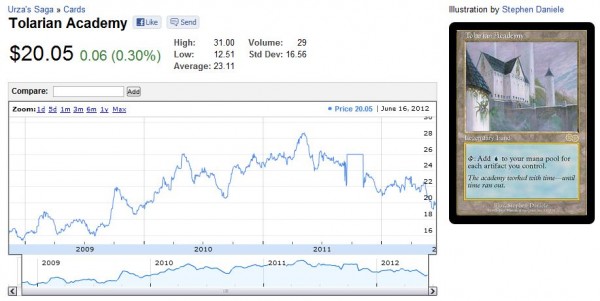 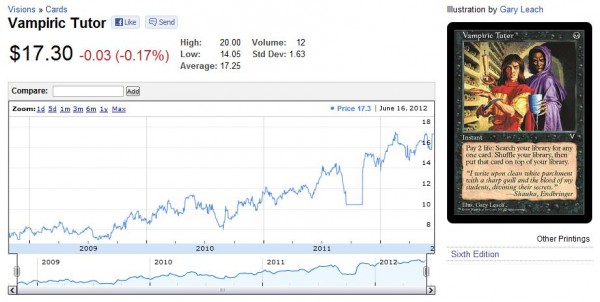 These two cards are fairly stable in price, yet they are often obtainable very near their cash equivalent. Tolarian Academy is nearly the same as a $20 bill if in NM condition, yet Star City Games sells SP copies for the same price. Vampiric Tutor has been a steady gainer over the past couple years, yet the restrictions on this card’s playability means some players are okay with trading this one away at cash pricing. These are worth keeping an eye out for.

One other example in this price range I want to mention that falls on the cheaper side of the $5 - $20 price range is Gideon Jura. It sees almost no constructed play nowadays, yet the card still can be exchanged for a five dollar bill. Downside is limited on this card, and acquiring them at five bucks could be similar to trading for cash.

The key here is finding cards that can be readily converted into cash and can be acquired through trades at reasonable pricing. Cards like Force of Will are nice to acquire but they normally demand a premium at the trade tables. Consider Gaeas Cradle, for example. Both the Cradle and the Force retail for $70 at Star City Games. Yet I frequently see Force of Will selling for just under $50 on MOTL, while Gaeas Cradle normally sells on the same site for a full $10 more (chart courtesy of blacklotusproject.com). 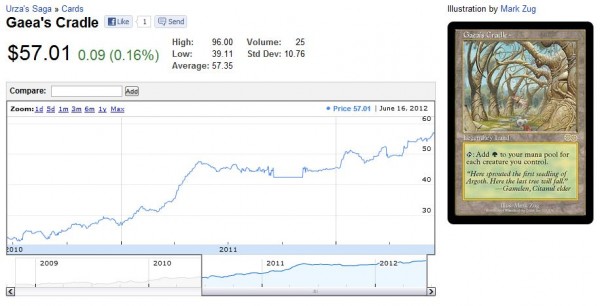 The discrepancy is in popularity – everyone knows Force of Will is a major Legacy staple. Meanwhile, Gaeas Cradle sees less Legacy play and more casual play. I would gladly trade my Forces for Cradles all day long as this would nicely increase my collection’s cash value.

One other example I can readily think of is Lions Eye Diamond. While this card is somewhat of a Legacy staple, the card sees play in only a couple decks (chart courtesy of blacklotusproject.com). 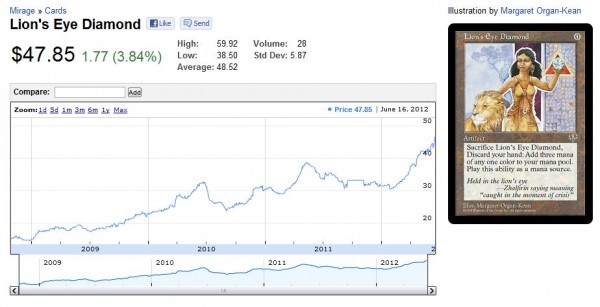 This card has gone on huge price rally recently, and I’m not really sure why. Dredge has not increased in popularity, and the recent outburst of blue Delver, Esperblade, and Reanimator decks has significantly weakened ANT decks, but perhaps it's due to the printing of Faithless Looting. Yet, Lions Eye Diamond is equivalent to a picture of Ulysses S. Grant!

Despite this run, the card is not as tradable as Dual Lands or Force of Will. The result? Players may not consider asking for $60 in trade on this one. Considering how the card was only a $20 card three years ago and (more entertainingly) a $0.20 card ten years ago, the perceived value of this one just has not kept up with the actual value.

There are many other examples, depending on how obscure you want to get. As I’ve discussed in previous articles, many Alpha Rares are trending higher in price, yet players may not value their Alpha Fungusaur at $100 as they should. Of course, good luck finding a player with an Alpha Fungusaur in their trade binder.

I would encourage you to consider other cards in these categories. Since the game is constantly in flux and prices are ever-changing, today’s opportunity may not be the same as tomorrow's. For example, it’s pretty likely you’ll still be able to trade for and sell a Tolarian Academy near $20. Meanwhile, Lions Eye Diamond’s perceived value will eventually surpass its eBay value, as most cards do.

Perhaps some of you have other ideas/suggestions on what cards trade for near their cash value?

Let’s face it – not many have the resources and time to open a retail store and command retail prices on their cards. The more you trade for these cash-equivalent cards near their cash value, the more you’ll get for your collection. This is one way you could actually fetch close to retail prices on your Standard and Legacy staples without all that overhead.