Darksteel, the second set in Mirrodin block, is notorious for driving off more Magic players than any other set, even the Urza block. It contained high-power cards for Affinity that did not require finesse to win with. It was like UG Madness in that the best deck was cheap, easy to play and frustrating to metagame against. Before Darksteel, there were several Affinity builds. Some tinkered with controlling counterspells and Broodstar, others angled more toward “cogs” like the Spellbombs. Once Darksteel hit, it was “Disciple of the Vault, Clamp, Ornithopter, Ravager, Clamp my stuff, you take 9, swing for eleven.” Try as people might, nothing could kill Affinity decks, even the deck your friend came up with that he swore would kill Affinity. The reason was that Affinity with Darksteel was so consistent and efficient that if your dedicated hate deck stumbled even once, you'd die with a hand full of Oxidize and dreaming of Molder Slug.

Luckily for the collector, the set is packed with value cards. Many of them won't surprise you, but it is still worth getting the updated price check on them. Others, I am sure, are new to you. Let's take a look!

Aether Vial is now, without the absurd P3K uncommons, the most valuable uncommon there is. It's like a Gilded Lotus that you can play on the first turn. It was a card that was stupidly powerful, but people didn't realize it at the time. I even looked up Darksteel reviews from the time – one soul called it “too slow or simply extraneous .” Ben Bleiweiss was a little more charitable when he said “Since previous cards of this type have been pure crappola, people might gloss the Vial over as useless as well - but give this one a second glance, will ya?”

Aether Vial grew to be so good that it ended up banned in Extended. The reason was that Vial gives an incredible amount of acceleration, even if it supposedly only drops a guy a turn later than your lands would support (if you drew a land every turn, that is!). Vial let decks in Extended play a Goblin Matron into a Goblin Ringleader in the same turn or utilize the color-fixing properties to run Meddling Mage in Affinity. Vial is currently a superstar in Legacy, fueling Goblins and Merfolk. Vial has dropped $4 since the printing of Mental Misstep because when you get your Vial countered, your deck has to play a lot more fairly and it does not perform as well.

My advice is to score these from people who don't know how much they are and to pass them off to folks who overvalue them.

People who like to play casual Affinity decks or tamper with artifact themes in EDH tend to like this guy. He trades in really low numbers, but he is worth more than bulk.

The combination of Ravager with Disciple of the Vault in a set with artifact lands meant that you could pound twenty damage out at a frightening pace. Ravager blanked an opponent's removal completely. If you kill my Frogmite, I'll eat it. If you kill my Ravager, I'll put his counters on my Frogmite. Thanks for playing. Ravager also made a convenient sacrifice outlet when you had Skullclamp and extra Frogmites and Ornithopters, too.

Arcbound Ravager sees very little play these days, since the Legacy Affinity deck is honestly not great. He trades well and in big volumes, though, so it's worth keeping an eye on.

People love lands that give them a little more value. Blinkmoth Nexus is like a flying Mishra's Factory, and it could take on Modular counters from a friendly Arcbound Ravager. Though Blinkmoth Nexus is nowhere near playable in constructed formats, people like manlands and they especially like this one! It's rare for a card to hold so much value after high standard prices, but this little land did. They trade in pretty good volume, on top of that.

When this guy got spoiled, Vintage players went agog, since we had Tinker. Vintage is a gentleman's club and the idea of swinging with an 11/11 Iron Man was unseemly to most people, who simply claimed that it would get Balanced, Sworded, bounced or worse. Oh, how they were wrong. A startling thing for people just observing a Vintage game is how rapidly a player can access Tinker if they are actively working on that goal. A Tinker on the second turn is not hard to pull off, and when it gets this guy, it can be hard to beat. Sometimes, you would have those games that started with an Island, Mana Crypt and Tinker for this guy. The second turn, you'd cast Time Walk and that'd be the game.

Now, Darksteel Colossus has been surpassed by Blightsteel Colossus, which kills in half the time. It was also reprinted, which depressed the value a lot. You're gonna laugh at me for this, but I traded a Sword of Fire and Ice for a Colossus when they were both out a few months and worth about the same. Regrets...

Nine mana is a lot to pay for this effect, which means you only see it show up in really casual decks. However, people get really horsey with Darksteel Forge and things like Mycosynth Lattice. One of the best EDH decks uses Arcum Dagsson, the Forge and Nevinyrral's Disk to blow up the world, over and over. Consequently, the Forge is in high demand for people who want to set up that combo and live a life forever alone.

Thanks to Proliferate, this card has seen some new life. Instead of grinding twenty turns of BeeGees-level staying alive, you can untap that Gilder Bairn and get to a game win in no time. Contagion Engine cuts the time by two thirds alone! While cards like Vampire Hexmage can ruin your day, the march toward a game win is now surer than ever with Darksteel Reactor.

I have fond memories of Christine the Pristine Angel. We ran it in our Vintage Oath deck, which was basically monoblue control. That is to say, piles and piles of instants. If an opponent was running lots of spot removal, we would side in this Angel. With spells in hand, the Angel could attack all the time and blank any removal that people pointed at it. The Angel also has a rare combination of being both immune to colors and artifacts, so it is a superb defensive player.

The main market for Shield of Kaldra these days is people who are looking to protect their general. If you are running a very specific deck oriented around something like Shirei, Shizo's Caretaker, then getting your general killed is a bad thing. Shield makes sure it sticks around for awhile longer, and while it doesn't grant haste, it does grant... Protection from Wrath? It also gets some attention from people who want to assemble the Kaldra combination.

Originally, Skullclamp cost a lot more and did a lot less. It only drew you a card. It didn't give -1 toughness. It cost more to play and activate. The designers wanted a card that rewarded people for playing creatures and acted like a consolation prize when they died. Skullclamp was that, but times a million. The designers did not thoroughly test the final card before they sent it to the printers, meaning that they missed its interactions with X/1 creatures. Several months later, Skullclamp fueled crazy decks in Standard. It clamped Goblins, it clamped artifacts. The most powerful thing it could do, though, was clamp Elves in Elf and Nail. You'd either Tooth and Nail on turn 4 or Clamp your brigade, drawing ten cards and locking things away soon afterward. Skullclamp is too good for Legacy, and people always seem to have plans for it in Vintage.

Sundering Titan murders dual lands. There's no way around it. It kills them coming and going, and it has been a one-sided Armageddon in Vintage since it was first printed. Sundering Titan has shown up in other formats, usually alongside the Urzatron. It's in moderate demand at the moment.

The Sword is a casual monster, emboldened by Commander play. There exists better equipment these days, but this Sword is just iconic. People go amok over it. The price briefly jumped to $50, but when the cough syrup wore off, the Sword settled to its standard ridiculous price.

Sword of Light and Shadow

The less-loved Sword from the set, this one nonetheless gives card advantage and protection from meaningful colors. I prefer this one in Commander play, but it is forever an ugly duckling next to its twin.

I remember when this was printed. Vintage players looked at it, looked at Mishra's Workshop and then asked “does this do what we think it does?” Trinisphere locks out Moxes when you get it out first. It locks out an opponent completely if you can follow it with a Wasteland or two, punishing greedy Vintage players. Trinisphere got to be so problematic that it is now restricted in Vintage. It appears occasionally in Legacy, but it is much worse in a format full of basic lands and bereft of moxes.

Though we have many options for a Naturalize effect these days, the Zealot is a thematic Elf and deserves extra attention on that front. You can track it down with a Wirewood Herald, for example. In monogreen decks, the Zealot is the necessary solution where Qasali Pridemage would be instead. 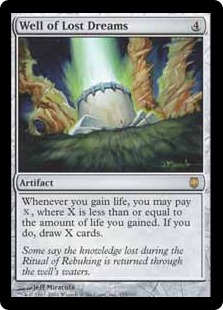 Finally, all that lifegain means something! Well of Lost Dreams lets you draw a card for each life you gain, meaning that it's just as crazy as you'd think in my Ghost Council Commander deck. Alongside Martyr of Sands, it draws serious amounts of cards in a neat little combo. Well has been creeping up a little in price as EDH players who are looking for more card drawing look toward it.

That's it for Darksteel! Next week, we're looking at Fifth Dawn, a set that wants you to play with as many colors as you can conjure up. Until then,

4 thoughts on “Insider: Delving into Darksteel”