Seriously. Journey Into Nyx spoilers are coming out, and I think most of them are pretty cool. But it’s not those cards that I care about right now.

It’s the casual stuff. I just placed a big order for Damia, Sage of Stone. And Aurelia. And Rise of the Dark Realms. And I buy just about every Chromatic Lantern I can find. Gilded Lotus too.

Because these cards are all growing faster than any Standard spec, and faster than many Modern specs after the run-up of the last few months. And I don't want to miss having these in my store.

Look, I know it’s no secret I love casual cards, and with good reason. It’s hard to know whether or not Birthing Pod will still be good in three years or if Deathrite Shaman will be banned. Buying into the “sure thing” like Volcanic Island takes a ton of capital. But buying into Sheoldred is a lot more reasonable.

So with the prerelease coming up and everyone going crazy about new cards and Mana Bloom, today I wanted to look instead at some of the juiciest casual targets on the market--cards that will almost assuredly rise on average over the next year or two at levels matching some of the format staples in Standard or Modern.

As I alluded to above, and wrote about back when it was nearing the end of its Standard lifetime, Sheoldred was always going to be a steady gainer. It’s a mythic from a third set, and is currently sitting at $8, though available for around $6 online. 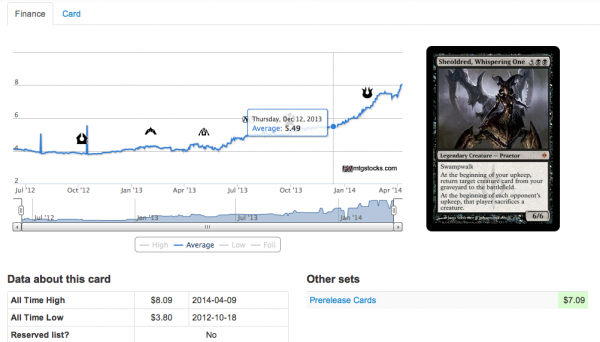 There’s nothing not to love about this graph. This card will be $15 in a year.

I talk about this one a lot, but that's because of how much confidence I have in it. It’s less attractive now that it’s hit $4, but I still think it’s a $10 card in 18 months if it isn't reprinted in that time. Foils are certainly going to go crazy, and will continue to do so even if it’s reprinted since many reprint avenues don’t put a foil copy onto the market.

I write about this one for a few reasons. Yes, it’s played in Commander, and that is part of its current $2.50 value, which is steadily rising.

But it’s also starting to see play in a fringe but nevertheless growing Modern deck, Mono-White Prison. It’s usually just a one- or two-of there to clear out excess lands, but since when has that ever stopped this stuff from going crazy?

There are just a handful of these across the internet, so this feels like the next random Modern spike to $10. Sigil of the Empty Throne fits in here as well.

Speaking of cards with very little supply, here’s one that is ripe to spike. This isn’t one you’ll see plastered all over the internet until it’s too late, just like Edric. But there’s no doubt this will soon be in for a price correction from its current $6 tag.

In fact, keep an eye on the original Commander cards. Most of them have only been printed once and have a lot of upside. Not only did Edric go up, but Sewer Nemesis also rose recently. I bet you didn’t see that one coming.

Same story as Lantern, with a lower upside due to multiple printings. I know how easy it is to forget about cards like these since you take them for granted, but they are guaranteed money-makers.

The rise on this one, available for $2, seems to be slow but steady, and while the absolute value gains here may not be insane, it will be a steady climb to $5.

A lot of these are in circulation, but even so at $3 this feels a little underpriced. It’s going to be a bit before we see $5 and it’s a long climb to $10, but rest assured it’ll get there in a few years. Not a bad cards to lose in the box of extras until then.

It may be a little early to start talking about this one, but I’m confident it’s a great pickup. The price has stabilized since its release and these are available for $5-6. I think it will come down a little bit more before rotation, but probably not a ton. We’re near the bottom, and when we reach it buy in heavy, because as a mill card that is also mythic and splashy (a god!), this is gold.

I don’t love the $4 buy-in price, but there’s no doubt this is one of those absolute must-includes in blue Commander decks. $4 is still going to be cheap if this thing makes it a year or two without being banned.

I don’t care that this had a promo. $3 is cheap for where it will be before too long. Throw Mind Grind in there too.

Along with Prophet of Kruphix, these two cards make U/G (with the dirt-cheap Alchemist's Refuge) insane in Commander. A ton to like all around here.

I could go on with some more picks from recent sets, but those are all the casual cards at the top of my list from the previous one to two years. These are still available in binders but quickly drying up, and if you don’t move now on whichever of these you feel most strongly about you’re missing some easy money.

I’m confident enough in picks like these to take a portfolio of these against someone’s Modern picks for the next year--that’s how much stock I place in casual cards.

I hope these help make you some money as well!