Like many of you, I have noticed that many Mystery Booster cards are much cheaper than other versions of the same card. I know that OG printings often carry additional value based on the fact that they are the original, but reprints typically tend to average out to a similar price, unless there is a more desirable artwork for one of them. I've previously done a lot of work analyzing how reprints drop the price of cards, with my average at the time of the article being around 27%.

One last important point to note is that the mythic rares aren't really mythic. They have the mythic symbol but are seeded just as commonly as all the rares in the set, effectively giving us a set with no mythics and 182 rares from an "odds of opening a given card" standpoint. It's also important to note that there are fewer foil options than rares so effectively the foils are more common than the rares in this set.

Compare these numbers with what you would expect from a Standard-legal booster box. Assuming you're looking for a specific rare, as again the Mystery Boosters don't differentiate between rare and mythic, then you typically have a 1.65% chance of opening a specific rare per pack which when you multiply by 32 packs per booster box (discounting the 4 packs that are expected to have mythics) you end up with roughly a 52.8% chance of opening at least 1 of any given rare.

This means that your likelihood of opening any specific rare from a Mystery Booster is 4x less than a standard set or you have to open 4x as much product to get the same results. This has major ramifications for Mystery Booster rare prices.

For now, we will focus on only the Mystery Booster rare and mythics whose current TCGplayer Market Price exceeds $5.

This drops limits our dataset down to 42 cards of note. If we take a look at this subsection of cards and compare the price of the most recent printing of the same card prior to mystery boosters release we see some interesting things.

Now if we take the difference between the most recent printing and the Mystery Booster printing and divide by the value of the original printing we get an overall percentage price difference between the Mystery Booster version and the original. When I averaged them all out I got 18%, which means that on average the reprint is sitting at slightly under 18% of the most recent printing. I think it's important to note that there are a few cards where the price difference is rather significant like Sakashima the Imposter and Rhys the Redeemed, though removing just those two only drops the difference to 16%.

Why does that matter?

I have done a previous analysis showing and it's pretty logical that reprinting a card drops the value of the original. Normally, we expect the reprint to be worth less than any original versions but more often than not the most recently printed version is the cheapest version available, save exceptions where new artwork is provided and it's desirable artwork. So knowing that and knowing that the current difference is around 18% we would assume that prices of the staples should slowly start to increase, barring additional supply.

I feel that is a VERY important footnote as many of the larger retailers here in the US are re-opening their doors and their inventory is flooding back into the market. Had their inventory already been available, I would argue that we are quickly approaching the ideal time to scoop up your speculation targets from MYB1. However, because we can now expect additional supply and there isn't any particular reason to expect a sudden increase in demand prices should continue to fall.

Selvala, Heart of the Wilds 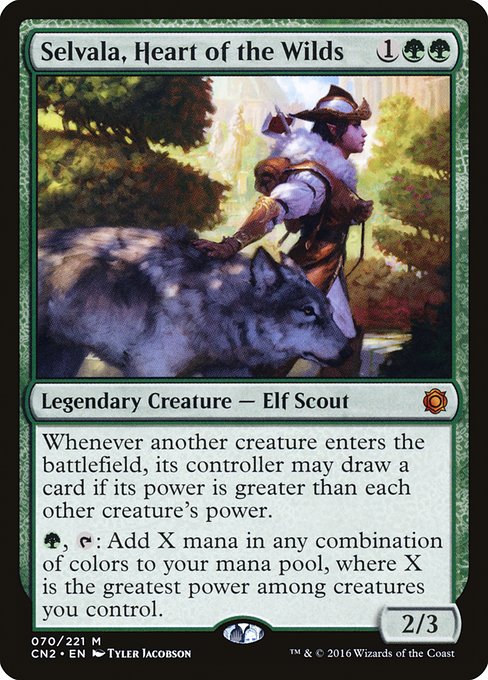 One Last Point of Concern

Before buying into your spec targets from Mystery Boosters, the massive uptick in WoTC supplemental products this year could very well cause a price glut of many of these cards; let alone should they get reprinted again like Selvala, Heart of the Wilds which honestly was one of the cards I was going to buy for speculation. If this price glut becomes a reality, then the good news is you'll have more time to acquire your speculation targets from this set and other sets; the bad news is if WoTC decides to continue down this path moving forward than speculation as a whole gets a lot more risky and a lot less profitable.