Even if you've been playing Commander for a short time, you probably have a favorite deck. Maybe you love the Commander itself or the deck's general strategy. Maybe it has your favorite cards or some wacky interaction between an unlikely combination of cards. It doesn't matter-- for whatever reason, this is the stack of cards you're most familiar and comfortable with.

I'm best known for my Child of Alara deck, which I do enjoy because of how complex and cerebral the games can get, but it's definitely not my favorite.

The one deck I have never taken apart and always keep up to date is Kemba, Kha Regent. It is a grindy mono-white control deck that aims to attrition people out with value equipment, creature tokens and recursion.

There are also a few miniature combos that further the main game plan of building incremental advantages.

This deck is based on interactions between all kinds of equipment and the free creatures you generate from Kemba.

What you want to do is assemble a value engine, for example Mortarpod plus Basilisk Collar or Nim Deathmantle, and use that to generate as much board presence and card advantage as possible. When someone eventually destroys one of your artifacts, you either replace it with a redundant combo piece or buy it back with an effect like Treasure Hunter.

Let's take a look at how the deck is built to execute this plan. We'll start from the ground up with the mana base.

This is actually a critical part of the deck. I see it as the linchpin that enables the deck to function as well as it does. Your engines are mana-intensive so you must be capable of producing large quantities of colorless mana.

There are essentially four kinds of lands here. The first are basics, because we have to produce colored mana at some point.

Next we have lands with the potential to produce large quantities of colorless mana. The upside of these is absolutely huge in a deck that's as mana hungry as this one; the downside is that sometimes you can't cast your double-white spells until turn four or five.

Third, we have manlands to suit up with equipment. Your swords rely on hitting players, so it's important to make sure you have a board presence even after a sweeper.

Last, there are value lands that generate card advantage in some way, like Windbrisk Heights and Emeria, the Sky Ruin.

Thirty-five lands may seem low for a deck this mana-hungry, and indeed for any of my decks. The short story is that I haven't had any trouble with this number, and have actually flooded more often than not. Many of your lands produce more than one mana, so it's not a huge deal if you stumble a little.

Once you hit eight mana, you can start doing several things each turn. Usually the deck reaches this point by turn six or seven.

Sometimes you can get there much faster with artifact acceleration and other cards that help you hit your land drops: Now, I'm usually not a fan of artifact mana because I think it does degenerate things to the game. However, this deck uses a ton of equipment which are huge tempo sinks. Unless you can get that tempo back somehow, you're going to be far behind for a huge portion of the game. That's why I think mana rocks are pretty reasonable in this deck.

The second section of cards guarantees that you can continue to make land drops in the mid- and late-game. Especially important are the tutors that find Glimmerpost, Vesuva or a missing Urzatron piece.

This deck can do a lot of work with a relatively small amount of mana, so it's not the end of the world if you get stuck on lands early. However, as you approach the end of the game, you do need to produce larger and larger quantities of colorless mana in order to equip and reequip multiple times per turn.

The most interesting card here is Ashnod's Altar, which turns cats into mana. For the longest time I didn't want to run it because it gives you the ability to combo off. That said, this deck can't go infinite in the way other decks can. You can generate infinite mana, tutor up all your equipment and equip them as many times as you want. But any way of killing outside of combat will require five or more cards, which I am okay with.

The creatures contribute a lot to this deck's game plan. As I said before, you want to assemble engines that generate free cards and develop a robust board presence that's hard to disrupt. In order to do that, we have three kinds of creatures: The first set of guys rebuys artifacts and other permanents. These pair especially well with artifacts and lands that rebuy creatures, assembling a board presence that's difficult to break apart. Next, you have creatures that tutor up equipment and find the engine piece you're missing (usually Mortarpod). Last, you have generic value creatures that either interact well with the deck or generate card advantage.

The creatures with "Enters the Battlefield" abilities are critical, because you pull ahead in the mid- and late-game by casting those guys over and over again to find or recur the pieces you need. You're mostly looking for the effects that these guys provide, but being a creature is very relevant for things like Nim Deathmantle and Sword of Light and Shadow.

Speaking of Nim Deathmantle, let's talk about comboing off with Ashnod's Altar and the Recurring Nightmare impersonator. There are two infinite combos.

Alternately, you can generate infinite mana with Sun Titan or Karmic Guide and Fiend Hunter. Just Fiend Hunter your Sun Titan, sacrifice the hunter for mana, return it to play with Sun Titan and repeat. Add Mentor of the Meek to draw your deck or Nim Deathmantle to regrow your entire graveyard.

The interactions between these cards aren't always apparent. You can definitely surprise people who aren't expecting shenanigans like this from a white deck.

We've already talked about some of the degenerate things that Nim Deathmantle is capable of. The other equipment are just as capable of crazy interactions. Most of the equipment was chosen because they generate value as opposed to just making guys gigantic. That isn't to say you don't need to make guys huge sometimes, but that's usually secondary to generating cards and controlling the board.

I've split these into different categories based on the role they play. The first category generates cards in some way. Whether you're actually drawing cards off of Sword of Fire and Ice or Skullclamp, or just rebuying guys with Sword of Light and Shadow and Nim Deathmantle, their purpose is to generate tangible resources for you to put towards developing the board.

The second set of cards protect Kemba from removal. Swords certainly help with that as well, but these are the ones that most efficiently and single-mindedly ensure Kemba survives long enough to generate cats. It's important to note that many games come down to whether or not you can stick and protect Darksteel Plate. Because of that, you may consider including Shield of Kaldra, but I've done fine by being patient and not playing Plate into countermagic or Return to Dust. 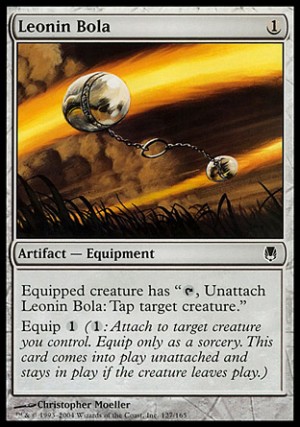 The next set of equipment provide bodies to throw equipment on. A huge problem I experienced in the early development of this deck was running out of guys. At that point I had a lifegain subtheme with Soul Warden effects and Martyr of Sands. While you could give those guys equipment, they were fragile and died often. This section ensures you have an excess of creatures.

The fourth set of cards leverages cat tokens to control the board. Deathtouch equipment combined with Mortarpod gives you unconditional removal for two mana and a sacrificed token. Thornbite Staff costs more up front but gives you the same effect without requiring a sacrifice. Leonin Bola is a recent upgrade to Diversionary Tactics, a card that doesn't get nearly enough love in its own right.

The last set of equipment pump Kemba or Inkmoth Nexus into one-shot range. Sigil of Distinction and Bonehoard are the best of these by far. Bonehoard gives you the largest effect for a small investment, whereas Sigil is incredibly flexible. You can cast it early for one or two just for something to equip or save it for a Fireball later on. That said, I'm looking to cut most of these equipment for more versatile effects.

Two cards I would like to try are the combo of Runed Stalactite and Oathkeeper, Takeno's Daisho. This may be a little too cute though, even if the deck could use more recursion.

Finally we have utility spells to deal with miscellaneous problematic permanents.

To be honest I am not happy with this part of the deck. I've had a ton of trouble dealing with artifacts and enchantments, which shouldn't be the case for white. Unfortunately I'm not sure which cards I can add to improve on those that already made the cut. I may start by trying Saltblast, Seal of Cleansing and Wispmare (yes, really).

As you can see, this is a mish-mash of sweepers and spot removal that mostly ignore your opponents' enchantments and artifacts. The card selection package interacts with Land Tax, Explorer's Scope and Scrying Sheets to make sure you find a good mix of action and lands.

There's not a whole lot more to say about these cards. They do the work intended for them well.

Throw Enough Cats at a Problem...

And that's all there is to that! I'm incredibly happy with this deck; it does all the things that I love-- grinding out small advantages, recurring value creatures, breaking cards no one else seems to like (Mortarpod). I'd definitely recommend building something like this if you're interested in a midrange voltron deck rather than one that's all-in on beating down.

Next week, we'll take a look at a new legend from Avacyn Restored. I haven't decided which one yet, so if you have a preference let me know in the comments or on Twitter.

4 thoughts on “A Boy and His Cats”