My favorite cards are ones that can be used both proactively and defensively depending on what the situation calls for. Removal, Vapor Snag, and random creatures (especially with flash) are examples of cards with both offensive and defensive utility.

These cards are immensely powerful in one-vs.-one games where efficiency is key. But they don't generate a big enough swing in board presence or card advantage to be nearly as effective in a multiplayer game. To find versatility in multiplayer, you have to consider more expensive cards or be willing to do a little more work.

One of my favorite cards of all time can do a little bit of everything if you're willing to build your deck around it: Second Sunrise. Its obvious application is to counter sweepers, but it has lots of other uses too, as evidenced by the number of combo decks built around the card over the years.

A particularly awesome version of this strategy is the zubera combo deck. The deck aims to sacrifice changelings and zuberas alike and rebuy them over and over with Second Sunrise and similar effects. The combo generates tons of creatures, cards, life and other resources, before going infinite for the kill.

An engine like this is what makes or breaks a deck. Second Sunrise can always be used defensively, but in a shell like this it becomes a threat itself, capable of putting you in a dominating position.

This week I want to try to capture the feeling of Second Sunrise’s degenerate side without devolving into actual combo. This means finding sacrifice outlets that don't lead to infinite combos like Phyrexian Altar.

I think the best way to accomplish this is to use a commander that provides a sacrifice outlet and pack the deck full of value creatures in addition to the aforementioned [card Second Sunrise]Second Sunrises[/card].

The Blood Arbiter and His Minions 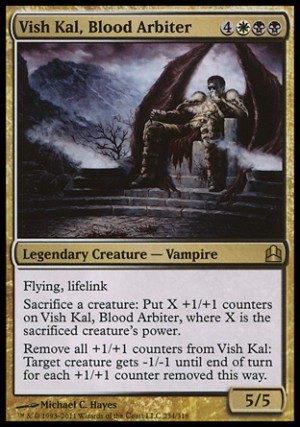 [card Vish Kal, Blood Arbiter]Vish Kal[/card] is perfect for this deck for a few reasons. First and foremost, he's a free sacrifice outlet whose ability (hopefully) won’t lead to many degenerate infinite combos. But he still offers the avenue we need to establish a board presence and generate value off of Faith's Reward and Second Sunrise.

The big question is what creatures we're going to sacrifice and reanimate. Here is my starting suite:

There are a ton of interesting interactions here and not enough time to explain all of them. But I do want to touch on a couple of themes that show up repeatedly throughout the deck.

Unfortunately, a few infinite combos did creep in to the deck in spite of my best efforts to forestall them.

Sun Titan and Fiend Hunter let you make [card Vish Kal, Blood Arbiter]Vish Kal[/card] arbitrarily large and sweep away everyone else's creatures. Mikaeus, the Unhallowed and any creature with power less than or equal to its toughness can be rebought infinitely. You sacrifice the creature, let it undie, then put the counters from Vish Kal on that creature to reset it. There are, of course, also a billion things you can do with Reveillark, Karmic Guide and any free sacrifice outlet.

The more interesting half of the deck is comprised of value engines rather than combo pieces. Teysa, Orzhov Scion and Adarkar Valkyrie both combine with [card Vish Kal, Blood Arbiter]Vish Kal[/card] to great effect.

These interactions take over a game more subtley than the infinite combos. They build up to obscene turns in which you sacrifice your board, rebuy it with effects like Adarkar Valkyrie or Karmic Guide, and repeat the whole process with Faith's Reward.

These turns will put you far ahead on the board and draw a billion cards. They will also typically provide the resources necessary to do it all again the next turn and lock things up!

The next thing we want to add is every version of Second Sunrise we can get our hands on. These are supposed to be the backbone of the deck: the cards that suddenly catapult you to your end game.

The downside of Second Sunrise is that it reanimates your opponents’ stuff, which prevents you from using it in conjunction with a sweeper to put yourself ahead. Fortunately, there are a ton of Second Sunrise variants that function specifically on your creatures. A higher density of these cards will enable you to use them liberally to protect your board or to generate smaller, cumulative advantages each turn. 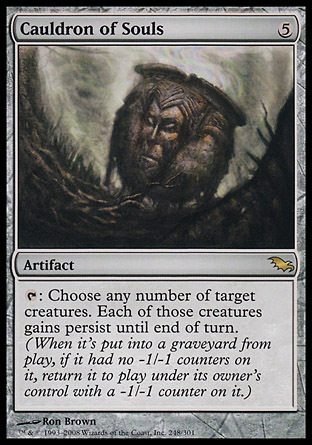 Unfortunately, there are only a few really explosive effects here. Second Sunrise, Faith's Reward, Cauldron Haze and Cauldron of Souls let you do some incredibly unfair things, generating a burst of card advantage and board presence.

The rest of your tools are more grindy and attrition-based. They yield the same results, sometimes even outpreforming the mass effects, but only over the course of multiple turns.

Dawn of the Dead and Phyrexian Reclamation, for example, produce a steady stream of creatures and cards to pull ahead as the game goes longer. Even Necromancy falls into this category when you use it in conjunction with something like Twilight Shepherd or Sun Titan.

The best thing about the incremental value cards is that they let you avoid overextending into graveyard hate. You can keep rebuying one or two creatures and force the table to deal with that without dumping any extra resources into the inevitable Tormod's Crypt.

As with any deck that wants the game to go long, this one needs to prevent others from getting too far ahead. Fortunately, white-black has a ton of ways to keep the board under control.

Between these two colors you have answers to any kind of permanent, targeted and mass discard, and graveyard hate. My choices below are pretty generic, and intended to be tweaked depending on your expected field of opposition. You should be able to build a suite of answers custom-fit to pretty much any metagame.

You may note the exclusion of powerful, all-purpose answers like Mortify and Vindicate. I don’t like to run these cards without a specific purpose in mind -- for example to answer Blood Moon in a five-color deck.

There's usually a better answer available for specific kinds of permanents. I've been a part of very few metagames that required an answer to actual everything. I'd rather run specific answers that are more efficient, like Unmake and Return to Dust.

Grinding It Out and Going Big

Generating small advantages over the course of many turns can be very effective. In a lot of cases, this is actually what determines the outcome of a game. Whoever survives the big exchanges of the game with the most resources intact will have a huge edge moving forward.

Unfortunately, people can disrupt your grindy engines. They can force you to waste valuable turns setting up all over again by destroying parts of your engine. In cases like this, you need bursts of cards, ways to dig for the tools not yet available.

You also need ways to kill people, which we haven't really addressed yet. Unless you plan on beating them down with Solemn Simulacrum, you're going to want a few big win conditions.

The most interesting choices here are Cradle of Vitality and Well of Lost Dreams, since both interact well with [card Vish Kal, Blood Arbiter]Vish Kal[/card] and especially well with one another.

Cradle of Vitality is a card I'm especially excited about, since it acts as removal, life-gain and a clock all at the same time! I really can’t get enough of cards like this, which are normally awful but can be made to accomplish so much in the right context. Finding gems like this is definitely one of my favorite aspects of brewing Commander decks.

After adding these, we have space for thirty-eight lands and some mana rocks to get Vish Kal into play more quickly, since this deck does hinge on him as a sacrifice outlet. After adding some light acceleration and mana fixing, here's the finished list:

The one thing that does disappoint me about this deck is the number of ways it can go infinite. I've often said that I'm not a fan of infinite combos, but each of the pieces are so awesome on their own that I'm loathe to cut any.

This is definitely a deck I could see keeping together for a long time. It's built around one of my favorite effects and has all kinds of cute stack shenanigans. Only time will tell if the infinite combos are too obnoxious, and which pieces need to be cut to eliminate them.

All said, it's a sweet list. If I elect to keep it together though, I may be obliged to add more [card Ashen-Skin Zubera]zuberas[/card]!

Next week I plan to explore one of the more linear commanders available, one I've wanted to try out for a long time. I keep making excuses not to build the deck, but I think it's about time to give [card Lin Sivvi, Defiant Hero]Lin Sivvi[/card] the shot she deserves.