As of Friday the 23rd, Fate Reforged is Modern legal.

That means some powerful new cards, like Monastery Mentor and Tasigur, t"he Golden Fang, are legal. But, more importantly, that means the latest Banned and Restricted Announcement is in effect, and Modern is operating under a new banned list.

With a new banned list, the Modern metagame is very much in upheaval. It’s a very new world out there, but it’s full of familiar faces.

As the Modern metagame shakes itself out from now until after the Modern Pro Tour: Fate Reforged, expect a huge variety of decks vying for the top spot in the metagame. At this point, it’s hard to tell exactly what will happen with the metagame, but the picture is beginning to form.

There is already some great data available, because last Sunday there was a Modern Premier IQ attached to the Open Series and it drew a lot of talent to the field. I have used these decklists to create a baseline Modern testing gauntlet for the new format.

These decks also paint a picture of the financial landscape by giving a practical perspective of what strategies may be viable in the format and how specific cards will be applied competitively.

Here’s what the metagame picture looked like on Thursday:

The most popular archetype at the Modern IQ was Abzan Midrange, aka Junk Rock, which put four players into the Top 32, including the second overall finish.

This finals decklist is unique in its inclusion of a full playset of Voice of Resurgence, highlighting the fact that this card has applications in the new Modern. This deck also features some cards that are sure to be staples in this archetype going forward, including Siege Rhino, Lingering Souls, and the new Tasigur, the Golden Fang. 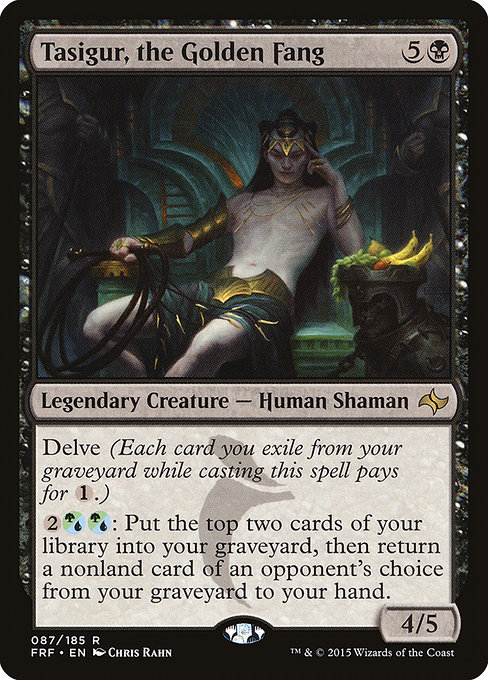 His sideboard features a wide array of cards, but Creeping Corrosion stands out as a card that’s sure to be in high demand this Modern season as a way to combat Affinity.

Reid Duke was also in attendance, and he put up a 19th place finish with his classic take on the archetype. His inclusion of two Timely Reinforcements seems like a very wise move in a format where Burn and Zoo are sure to be popular.

Deathmark is another standout against a field heavy in Tarmgoyf, Wild Nacatl, and Siege Rhino. Reid’s inclusion of Elspeth, Knight-Errant in the archetype might be a sign of things to come, and because of its application in other archetypes, like Jeskai or Zoo with Geist of Saint Traft. It’s a card I’m paying attention to.

Four archetypes were tied for second-most popular, each with three representatives in the Top 32. I present them in order of the highest overall finish for the archetype.

GR Tron is a deck left unscathed by the banned list changes. While the loss of prey in Birthing Pod decks hurts, overall it’s such a powerful archetype that it will always be a player when there isn’t much hate in the format.

It finished as high as 5th place, along with finishers in 22nd and 24th. The decklists are relatively stock overall, but the 24th place version showcase a pair of Ugin, the Spirit Dragon.

Affinity graced the Top 8 with its presence, and it is not surprising. This deck seems to have gained a lot from the format changes, and it is poised to be a major player going forward. An interesting inclusion in two of the decklists is a singleton Ghostfire Blade, which is quite powerful in a deck full of colorless creatures, and it’s a card I expect to catch on in the archetype.

Affinity also finished in 21st place, and in 31st place.

Burn just missed the elimination rounds with a 9th place finish, and missed the Top 16 with a 17th place finish, as well as 25th place. Burn proved itself as one of the top decks in Modern before the printing of Treasure Cruise, so it’s no surprise that it will rise to the top in the wake of that card’s banning.

It beat up on Junk and Jund decks all of last summer, but Siege Rhino is a problem, however, so expect to see lots of Skullcrack and Flames of the Blood Hands in the archetype.

This tempo and attrition-based archetype was a clear loser from the printing of Treasure Cruise, and it certainly benefits from the banning of the troublesome Birthing Pod.

Historically, this archetype preys on Affinity and Zoo decks, but it’s a typical midrange deck in that it can be tailored to beat any metagame, but isn’t necessarily strong against everything all of the time.

It’s quite fair in comparison to what other decks are doing, but it also plays many of the most powerful and efficient cards in the format. A perennial favorite among the pros and grinders alike, I expect this archetype to have many champions playing it at the Pro Tour.

The next five archetypes each put two pilots into the Top 32.

Ultimately winning the IQ was GW Auras, or Bogles. This deck preys on fair, race-oriented decks like Zoo and Burn, and it’s also quite strong against midrange opponents that don’t have access to enough hate cards. It’s weakest against combo decks, but it has access to great sideboard options. Another copy graced the Top 32.

Zoo seems like a winner from the bannings, now that it’s not fighting an uphill battle against a sea of Treasure Cruise and Lightning Bolt.

It’s hard to ignore Zoo’s third-place finish in the hands of Pat Cox--a longtime Zoo aficionado who has a great track record with the archetype and a history of collaborating with many of the top pros in the country. His version works to maximize the powerful Geist of Saint Traft by playing Noble Hierarch to accelerate, Mutagenic Growth to protect it in combat and from board sweepers, and Elspeth, Knight-Errant to push it past any ground-based defenders. 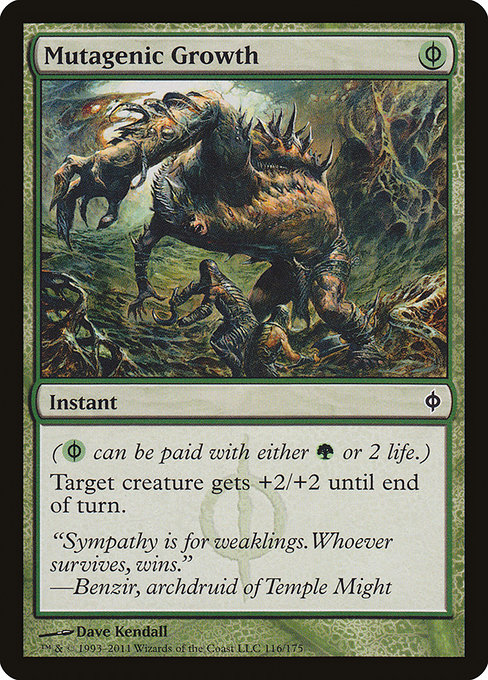 The archetype also finished in the Top 16. I expect decks like these two to be major players at the Pro Tour.

Storm Combo put two copies into the Top 8, finishing 4th and 6th, something no other archetype can claim. Judged on that metric, it was the most successful archetype of the tournament.

Storm seems like a big winner with the banning of Treasure Cruise and the decline of the aggressive and disruptive UR Delver archetype. Storm is best when hate cards are minimal in the metagame, meaning now is a good time for the archetype.

Merfolk surprised a lot of people with its strong finish at GP: Omaha, and it’s likely even better in a world post-Treasure Cruise. I’m looking towards Tidebinder Mage as the new Merfolk archetype all-star. 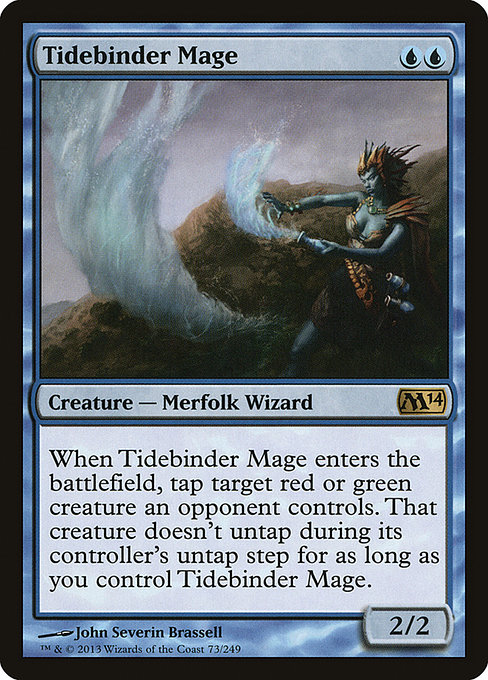 It put up a strong finish at the IQ with a Top 16 finish and a 32nd place finish.

Splinter Twin combo appears to be a winner with the new bannings. While the loss of Dig Through Time hurts, it has gained a lot with the decline of UR Delver.

It’s a great option in an open, unfocused format, especially one where Splinter Twin is off the radar, a. People have also been cutting Torpor Orb with the decline of Birthing Pod.

Jund isn’t particularly appealing when Abzan gives access to Siege Rhino, but Lightning Bolt is still perhaps the single best card in Modern, and red comes with its own share of great sideboard cards like Ancient Grudge and Shatterstorm for Affinity, Sowing Salt for Urzatron, Combust for Splinter Twin, Restoration Angel, and Siege Rhino, and the powerful Anger of the Gods.

Scapeshift was a loser in the banning of Dig Through Time, but it’s historically strong against aggressive decks like Affinity and Zoo, so it may be well positioned to attack the metagame.

Seismic Assault-Life from the Loam has long been a Modern archetype with mild success A metagame shakeup might be exactly what it needs to find a new lease on life, as it reached the Top 32 of the IQ. It’s a very interesting home for Tasigur, the Golden Fang.

Any death knells for UR Delver are premature, because the former top deck in Modern still has access to a core of very strong cards. It was among the best Tier-2 archetypes in the format before Treasure Cruise, and it will continue to rear its head.

Dredgevine was lauded as the biggest winner from the unbanning of Golgari Grave-Troll, and with a tTop 32 finish at the IQ, it has now scored its first success of many in the new format. This finish isn’t high-profile, so expect it to get some attention but not enough to trigger any massive metagame or market reaction.

Keep your eyes peeled towards the Pro Tour.

This plays the usual archetype staples, but the addition of Delve creatures is interesting and a sign of things to come. Hooting Mandrills is a solid role-player, but it's clear that Tasigur, the Golden Fang has found another home.

Grixis control has been a perennial Tier-2 Modern archetype, but it threatens to rise to the top.

This deck gains a huge strategic game-changer from the printing of Tasigur, the Golden Fang, which functions something like a Tarmogoyf without splashing into green. This deck has always suffered from a lack of meaningful board presence, but things are different.

This archetype also has all of the tools necessary to quell an aggressive tide or to disrupt a combo deck, so, if properly built for the expected metgame at hand, it could be a contender.

What are you thoughts on these archetypes? What other decks are on your radar? Share in the comments!