Pat gives us the follow up to his first article on getting started in MTG Finance, with a Commander focused perspective. 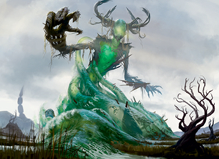