Welcome back to Ray of Command! This week we’re going to wander a little bit off the beaten path. There are a lot of Commander writers telling you about their latest deck list, exploring the intricacies of multiplayer strategy, or addressing how competitively we ought to play; this week, however, I’m going to talk about how to really personalize the format.

Before we get to that, we need to take a look at one of the many things that makes Commander so great: more so than any other widely played Magic variant, Commander allows you to play obscure and ‘weak’ cards to great effect. The most obvious reason for this capability is the fact that Commander is a singleton format. By virtue of having to play more individual cards you end up with more off-the-wall choices. But the format's singleton nature can’t account for this diversity on its own, and if you look at other highlander variants you’ll see much more similar deck lists. Commander has an added layer of rules which force you to play more different cards: you can only use cards that fall under your Commander’s color identity.

Perhaps more important than the restrictions that Commander enforces are the opportunities it opens up. The fact that the format makes for long, drawn-out games allows cards that would be [card Ulamog the Infinite Gyre]too expensive[/card] to see play in traditional Magic to see widespread usage. But the biggest factor in making Commander decks so unique is the presence of your Commander. Because you always have access to your General you can build around them a lot, and even a ‘terrible’ card becomes worthwhile if it’s highly synergistic with your Legend of choice. Don’t think Mindless Automaton is an all-star? Have you ever seen it in a [card Shirei Shizos Caretaker]Shirei[/card] list? Think Amulet of Vigor is junk? [card Geth Lord of the Vault]Geth[/card] begs to differ. Can’t find a use for Gorgon Flail? [card Jaya Ballard Task Mage]Jaya Ballard[/card] might just be your answer. The wide range of Legendary Creatures allows for a whole lot of cards that would otherwise be unplayable to shine, but many more are still left out in the cold. Eventually Wizards may print a Commander who wants your beloved Healing Salve, but in the mean time you’re going to have to work a little bit harder to get use out of it.

Commander is at its heart a casual format, and most people intend to have fun without worrying too much about winning. For this reason, Commander is the perfect place to exercise your design skills: create your own Commander! Maybe you’ve always loved Mercenaries and wished that [card Lin-Sivvi Defiant Hero]Lin-Sivvi[/card] had a mirror, or maybe you wish that Rise of the Eldrazi’s [card Lighthouse Chronologist]Levelers[/card] had a leader to rally behind. Perhaps you’ve been waiting for a Legendary creature that would let you play [card Stinkweed Imp]Dredge[/card] in Commander, or yearning for a religious leader that your Battletide Alchemist can support. Many love Commander because it lets them revisit their favorite cards of ages past, but Basking Rootwalla isn’t of too much use outside of a blue-green madness shell, and it’s hard to make that deck work in an 100 card singleton format. But your Commander can make up for any lack of consistency! That said, we shouldn’t go too crazy making our own Generals on a whim; there are some important things to keep in mind.

The first time you bring a homemade Commander to a playgroup, you’ll most likely meet with some uneasiness. Some people will just feel out of their element seeing cards that don’t exist, while others may be afraid that your Commander will be overpowered and make things unfun. Assuming you want to continue to play your created Commanders, it is very important that you make a good first impression; the last thing you want to do is turn someone away by making your General too powerful. So while you eventually want to end up with a decent Commander, you should start by making it weaker than you think it needs to be.

Then tack two mana onto its cost.

Magic cards are notoriously difficult to balance. It’s why Wizards of the Coast has an entire group (Development) devoted to it. Moreover, your Commander will most likely be harder to balance than the average card seeing as you’ll probably be giving it unique abilities. After all, if there were a lot of cards with the same effect to use as precedence, you probably wouldn’t need to be making the Commander in the first place. You can ratchet up its power after you’ve played some games, but start out very cautiously.

Make it fit the Color Pie

Though you’re only designing this card for Commander, and thus don’t need to worry about it setting a precedent for the game, it’s still important for the abilities to make sense in color. This isn’t Shards of Alara, so there’s no reason that your Commander with the ability “Whenever a player casts an instant or sorcery spell, that player copies that spell. They may choose new targets for the copy.” should be white, not even if you really want to go crazy with Beacon of Immortality. As long as you’re making gold cards rather than hybrid ones, it’s easy to add new aspects that make each of their colors fit, so there’s no reason to leave things feeling wrong. For instance, simply adding vigilance to the above card, or even just giving it significantly higher toughness than power would allow it to feel white.

Now that your Commander doesn’t stick out like a sore thumb, it’s time to make all of this effort worthwhile: your Commander needs to do awesome things. It’s not worth going to all of this trouble if your shiny new Legend ends up being about as exciting as Kamahl, Pit Fighter. It takes a lot of time and energy to create and balance cards, so make sure they do something memorable and unique. The best way to make your Commander stand out while simultaneously making ‘bad’ cards playable is to make a subset of cards play differently with your Legend on the board. For instance, if your Commander has the ability “Whenever damage that would be dealt to a creature is prevented, put that many +1/+1 counters on that creature.”, Safe Passage is going to play more like a Strength of the Tajuru than a Fog. But wasn’t I just cautioning you to keep your Commander weak to stop people from getting scared off, won’t doing ridiculous things have the same effect?

Make it Easy to Disrupt

You can consistently make the most powerful and over-the-top plays at the table without your Commander being too strong; the secret it to give yourself a huge blind spot. As long as the enormous advantage you’re incurring can all be kept in check pretty easily, you shouldn’t have too many problems. Nonetheless, not just any blind spot will do: you have to make sure you’re weak to an effect that most people play so that it will consistently come up. The easiest way to do this is to make your deck fold to board sweepers. I’ve written about how overplayed they are, but the truth of the matter is that most people are packing quite a few wraths, so making yourself vulnerable to them by only gaining on-board advantage will let the table keep a handle on you. As a converse example, you probably shouldn’t make your created Commander help you find a ton of lands because the fact that mass land destruction is frowned upon means that doing so will probably give you an unanswerable advantage.

Putting it into Practice

So now you’re ready to give making your own Commanders a shot, but before you go I thought I ought to show you one of my more successful creations. Normally I’m not a fan of posting Commander deck lists, but I think here it’s necessary to show how it all comes together. First off, the Commander: 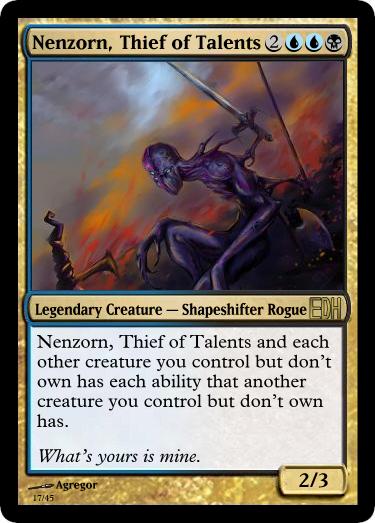 This ability ended up needing some pretty odd templating, but simply put, all of the creatures you steal or reanimate from your opponents’ graveyards share abilities with one another and with Nenzorn. He ended up in blue because the effect felt a lot like Polymorphing, that is, blue’s ability to shape-change, and he ended up in black because in the context of Rise from the Grave, the ability feels almost Necrotic Ooze-esque in grafting the fallen’s limbs (abilities) onto itself. You could make the argument that Nenzorn should be white, like Concerted Effort, but by caring about what isn’t yours he comes off feeling a lot more like ‘everyone’s been brainwashed against you’ than ‘we’re sharing our skills to fight the good fight.’ Color arguments aside, onto the deck list:

Some Things You Don’t Want on the Board

Use More Abilities than You Should

A few things to note: depending on what sorts of creatures you’re stealing, Nenzorn should be cast at different times. Cast him early so that he can use Avatar of Woe’s tap ability right away, or late so that you get an Acidic Slime trigger. Either way, this can lead to such epicness as Deathbringer Thoctar and Glissa, the Traitor or Oracle of Mul Daya with Captain Sisay, but though the Control Magic effects gain you card advantage, they still leave you behind after a [card Wrath of God]wrath[/card], thus allowing the rest of the table to get back in the game quickly. I have lot of fun playing this deck, and I hope more people will create their own Commanders.

What do you think? Do you want to hear more about created Commanders? Are you interested in making your own? Or was this article a flop in your eyes? Let me know in the comments!