When my friends and I started playing Commander in college, we didn't really know that there were "official" rules for the format. 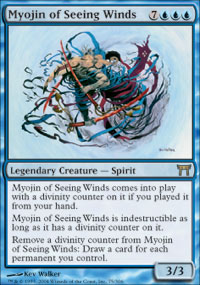 We played very casually with plenty of house-bans and rules. Consequently, when someone built an Azami, Lady of Scrolls combo deck, it easily dominated our games. One person's response to this was to build a Myojin of Night's Reach deck. At the time, we didn't know or care that casting your general from the Command Zone was different than casting it from your hand, so Myojin of Night's Reach was a great foil to the blue combo deck.

However, it didn't take long for the combo player to respond in kind by switching their general to Myojin of Seeing Winds. Soon, the game devolved into a sub-game of these two decks jockeying for position, trying to win the Divinity counter war, and the rest of us trying to win before they did. 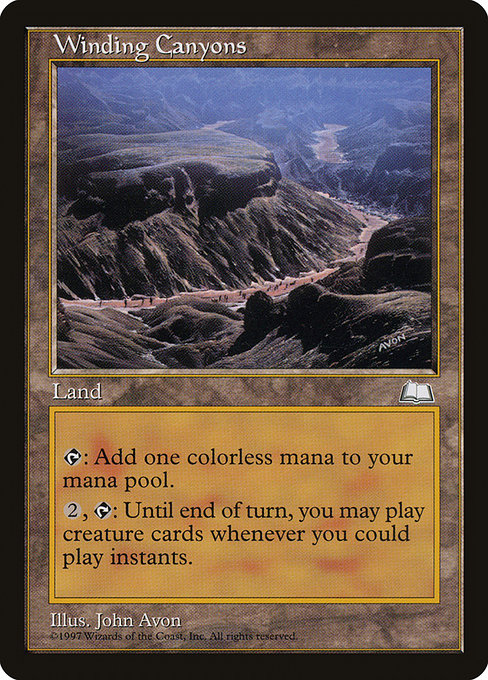 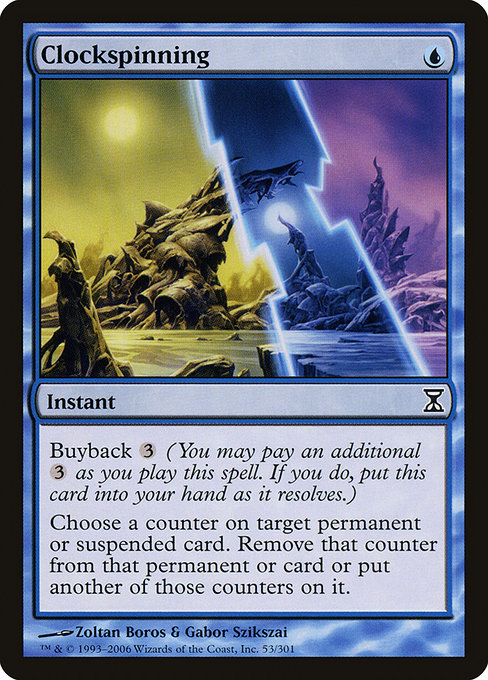 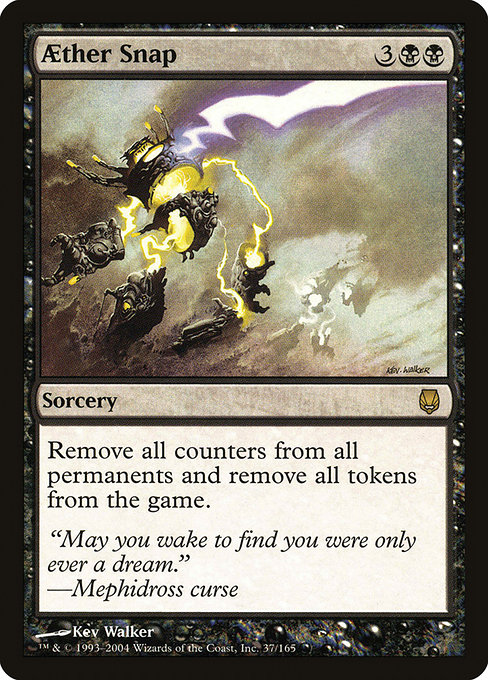 Of course, after several months of this, two things happened that were very bad for these two decks. First, the rest of us got tired of the ridiculous Divinity counter sub-game and started playing beatdown decks that never let these decks hit eight and ten mana. Secondly, we learned how the rules worked. The decks tried to adapt by using things like That Which Was Taken, but these two changes made the decks essentially unplayable.

That said, even after all this time, I remember how absurdly powerful the Myojins could be when you managed to get Divinity counters on them.

Sometimes I get a little nostalgic for those high tension games—games where a few of us mere mortals tried to kill the Myojins before they finished fighting one another.

Recently, the Myojin were brought up as a sort of joke during one of our games at the local game store and were discussed as cards that have been completely outclassed by Titans, the Eldrazi, and the Praetor cycle from New Phyrexia. Since then, I've been thinking about throwing together one or two Myojin decks to teach some respect for the greatest of all the Kami.

Of the five, the Blue one seems to be the best place to start, since it's the most capable of bouncing creatures and manipulating counters.

Let's be honest. The format has come a long way since in the last couple of years.

These days we're playing in a world where you can build a combo deck or a prison deck in any color that plans to win by it's sixth of seventh turn with a startling degree of consistency. The primary way of getting a Divinity counter on Myojin of Seeing Winds is to cast it once, then bounce it and cast it again. If your plan involves casting a ten mana Hill Giant not once, but twice, it'd better win you the game. That means that the important question is: What's the best way to make Myojin of Seeing Winds a one-card combo? There are two suites of cards that I thought of that accomplish that:

This is what I imagined to be the primary route to victory. You get a Divinity counter on Myojin, you suit it up, then draw a billion cards and one-shot someone with your general. Diviner's Wand and Empyrial Plate both make Myojin gigantic. And with either of those, 18 cards will make Myojin lethal. Ideally though, you'll be able to copy whichever equipment you're using at least once, cutting the number of cards you need in half. The tutors like Fabricate and Tezzeret the Seeker just make your "combo" more consistent, while the lands give you haste or pseudo-haste while making you less susceptible to disruption and freeing up mana on your big turn.

Your secondary route to victory is significantly more epic and has more synergy with the overall plan of the deck.

The plan here is relatively simple: Get a Myojin in play with a Divinity counter and and resolve Inexorable Tide.

At this point, Shrieking Drake reads "U: Proliferate," which you'll use to put a few Divinity counters on Myojin of Seeing Winds. Then you can start removing the counters one at a time until you draw Laboratory Maniac, and then you can proceed to draw your deck and win the game! As an alternative to Shrieking Drake, you can use bounce spells to recast creatures, hoping to draw into more bounce spells.

The upside to this plan is that it doesn't involve the combat step and that the bounce spells are already necessary to the deck, since you have to get a Divinity counter on the Myojin somehow.

At this point there are a few big questions that still need to be answered in order for the deck to function: How do you deal with disruption? How do you generate enough mana in a reasonable fashion? Are there more reasonable ways to get Divinity counters?

The easiest question to answer is how to deal with disruption—with disruption of your own! Blue has a huge array of countermagic available to it and you'd be remiss not to take advantage of it in a mono-blue combo-ish deck.

The protection here generally falls into two camps. The first is the very cheap or free countermagic, like Force of Will and Foil, which help you to protect your Myojin. Generally, I'm not a fan of cards like these because they put you so far behind the rest of the table in terms of cards. However, with this deck, once you're casting these counters you won't care about your hand size since you're about to kill a player and restock your hand. You just want the counters to be as cheap as possible so you can make sure you don't get blown out by removal.

The second class of counters are those with some amount of utility that you'll plan on using throughout the game while you're setting up your Myojin turn. Things like Dissipate deal with recursion strategies, while the cantripping counterspells make sure you don't fall behind on cards.

Remand is probably the most interesting one here, since it does double-duty as a counterspell and as a way to get Myojin into your hand so you can get a Divinity counter on it.

This deck is clearly going to be incredibly mana intensive. You're looking to spend at least 20 mana over two turns to maybe kill someone, so you're going to need some of the most degenerate mana acceleration there is to get there at a reasonable point in the game.

Gauntlet of Power and Caged Sun are the two most powerful cards here, since they double your mana. You could also try Extraplanar Lens, but I've seen people get blown out when they try to use that card and it's not something I'd like to have happen to me.

We've also got classics like Solemn Simulacrum and Trinket Mage into Sol Ring. Trinket Mage can also get Mana Vault and Voltaic Key, which let you ritual up to Myojin.

The card with the most potential out of these is Everflowing Chalice, since this deck does have a small Proliferation sub-theme. Chalice can quickly get out of hand. The fact that Chalice scales up over the course of a game and interacts favorably with one of the themes of the deck definitely pushes it over the top of a more efficient cards like Worn Powerstone.

And the last of the must-includes are the cards that make it easier to get Divinity counters on your Myojin. Proliferating Divinity counters is one of the first things I thought of when I first saw that mechanic and I'm definitely excited to see how that interaction works out. Sadly, there aren't all that many proliferate cards that are very good unless you have counters as a dedicated part of your deck, but the ones that the deck is running are fine, even if you can't proliferate on anything.

Filling in the Gaps

Thus far, we've dedicated forty-three deck slots to the fundamental engine of the deck. The last sixteen or so cards need to be good enough to handle the early and midgame so that you don't lose while you're setting up a Myojin turn. As the deck is mono-blue, we're generally going to have to rely on artifact-based interactions to protect ourselves from creatures and other permanents that we can't counter on the way down. The suite needs to focus on dealing with on-board problems and slowing the game to the point that you'll get a chance to resolve a Myojin.

The first suite of cards is exactly what we need to make sure the game doesn't get out of control. As long as you can prevent other players from reaching their endgame before you have a chance to start killing people, everything should work out. There's not too much to say about these guys; they're pretty standard inclusions in decks across the color pie and spectrum of archetypes.

The second set, however, is a little more interesting. You have some graveyard hate and non-basic hate; effects which need to be present in some quantity in every deck. There's also Muddle the Mixture and Forbid, which both do interesting things for the deck. Forbid plays well with Myojin's ability to restock your hand, and Muddle the Mixture enables you to find your Empyrial Plate.

Over the course of a game, you're going to have to use countermagic to protect yourself, and both Mysic Remora and Jushi Apprentice // Tomoya the Revealer are great ways to restock your hand. They also enable you to use a cards like Dream Halls to enable you to cast Myojin more easily, or Venser's Journal to keep your life total up. Lastly, Body Double is another way to cheat counters onto a Myojin of Seeing Winds; as long as you can get Myojin in your graveyard, Body Double halves the cost of getting a Divinity counter.

Building the manabase for this deck is a challenge since there are strong incentives to run utility lands and basics. Utility lands give you more value out of your mana, but the basics play better with Caged Sun and Gauntlet of Power. Both approaches have upside and the trick is to find a way to balance the two. Here's the approach I've settled on:

The manlands, particularly Inkmoth Nexus, interact very favorably with your equipment gameplan and give you a backup to Myojin. Thawing Glaciers enable you to consistently make land drops, especially in conjunction with Deserted Temple and Vesuva, which is important for making sure you can get to ten mana. Academy Ruins and Buried Ruin are there to protect your artifacts from removal. Your gameplan hinges pretty heavily on resolving and keeping in play fragile pieces of equipment, so being able to recur those is very important.

With the manabase finished, let's take a look at the finished decklist:

And that'll do it for this deck!

I'm excited to take it to my LGS for a few weeks to see how this turns out and if it's able to earn some respect for the old school of gigantic legendary creatures. As always, be sure to let me know what you think in comments, on Twitter, or by email. I'm always excited to discuss the format with anyone who's interested. Be sure to check out next week's article. I'm excited to be taking a unique look at how to handle graveyard-based attrition and combo decks!