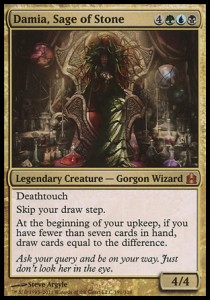 If you've been reading this column for awhile or listening to Commandercast, you probably already know how much I love The Mimeoplasm.

Ever since that guy was spoiled, I've put him at the helm of several Commander decks and tried to christen him with the unofficial title of "The best Voltron Commander in the format." There are few things I enjoy as much as starting a game with The Mimeoplasm and letting him devour some souls.

The problem is that I enjoy playing with The Mimeoplasm to the exclusion of the other BUG colored Commanders, Vorosh, the Hunter and Damia, Sage of Stone. Over the last few weeks I've been pushing the theme of trying new things, and in that spirit I decided to build a deck that did something crazy with one of these two BUG Commanders.

I boiled it down to two ideas: a Proliferate-themed [card Vorosh, the Hunter]Vorosh[/card] deck or a [card Damia, Sage of Stone]Damia[/card] deck that tries to turbo through its library and win with Laboratory Maniac.

The Dangers of Damia

One of the things I was most concerned about, which the podcast confirmed, was that [card Damia, Sage of Stone]Damia[/card] decks tend to lean towards goodstuff or combo.

You're starting with a Commander who is a draw engine unto herself in colors that can ramp aggressively to cast her early, all while running the best tutors in the game. Almost incidentally, this means that if you play any combo pieces at all, your deck has the ability to combo off with surprising speed and consistency.

This means that I want to avoid cards like Palinchron and Tooth and Nail, because of how easy it is for those cards to turn a "normal" deck into a combo deck. Instead, I want to focus on protecting [card Damia, Sage of Stone]Damia[/card], digging through my library, and ending the game with Laboratory Maniac.

Naturally, we'll be doing some other cool stuff along the way. 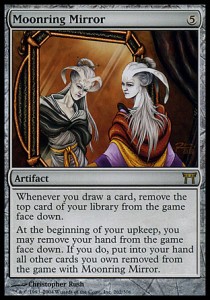 [card Damia, Sage of Stone]Damia's[/card] ability to fill your hand is obviously insane, but there is another line of text that you need to be mindful of. Skipping your draw step can be dangerous, since it makes it possible to get Damia-Locked in the event you have seven cards you can't do anything with.

What this means is that you want a lot of ways to get cards out of your hand and keep your "deck-velocity" up. The more new cards you see, the more exciting things you can do.

Have I ever got a way to see a ton of cards!

The goal here is to go off with [card Damia, Sage of Stone]Damia[/card], Moonring Mirror and/or Bottled Cloister to draw a billion cards.

Moonring Mirror lets you double however many cards you've drawn with [card Damia, Sage of Stone]Damia[/card] for each copy that you have, which is awesome. But what's more awesome is having two or three hands of between ten and twenty cards floating around between different artifacts! How often does that happen?

In contrast to the absurd card selection of Moonring Mirror, Bottled Cloister has two large. First, you can't play on your opponents' turns anymore, and second, if Bottled Cloister dies your hand is exiled forever.

The problem with this plan is that you're relying on a combination of two or more very vulnerable permanents, all of which are reasonably expensive. Let's get to work on those two problems, shall we?

One of the things that all [card Damia, Sage of Stone]Damia[/card] lists agree on is a heavy ramp component. When your general costs seven and is as powerful as [card Damia, Sage of Stone]Damia[/card], you want to be able to consistently resolve her early in the game. You could certainly run cards like Mana Crypt to make that happen even more often, but as that's out of my budget for the time being, this is what I'm running with for now:

I like a heavy suite of two-cost ramp spells to let you curve into your other accelerants. I haven't played too many games with this list yet, but it seems like it will be able to play a turn four or five [card Damia, Sage of Stone]Damia[/card] pretty consistently, which is about where I want to be. You can get this to be turn four more consistently by adding more cards like Coalition Relic that ramp you two lands as opposed to one.

This leads us to the second problem that needs to be taken care of: protecting our commander. 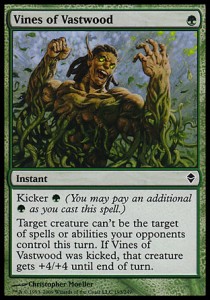 One of the goals I had for this deck was to be able to cycle through your hand as quickly as possible, even without your artifact engines.

In order to do that, I wanted to play many free and one-mana answers to removal and different kinds of permanents. Since [card Damia, Sage of Stone]Damia[/card] is a lightning rod for removal, you want access to as many Force of Will-esque effects as possible so that you can run her out early and still manage to untap with her in play.

The bulk of this deck is made up of efficient answers to different kinds of cards, and just about half of those answers are counterspells of different varieties. It's important to recognize that you need to choose the suite of countermagic that fits your playgroup; if people are playing efficient, compact decks, then Spell Pierce is much better than it is against ramp decks, for example.

One trap to avoid is being too conservative with your countermagic. You certainly don't want to fire all of it off at once, since you need to make sure that [card Damia, Sage of Stone]Damia[/card] doesn't die, but don't be afraid to use most of the spells in your hand. As long as [card Damia, Sage of Stone]Damia[/card] lives, you're just getting free cards by using up all of your answers every turn cycle.

If you have prior knowledge of your opponents' decks, you can definitely leverage that information to help decide whether to hold an answer or use it at the first opportunity. As a rule of thumb I'd say to be more aggressive with your spells than most BUG decks tend to be.

And here are the rest of your cards! One thing that I'm not sure of is the amount of graveyard hate. This deck runs four pieces: Tormod's Crypt, Nihil Spellbomb, Coffin Purge and Bojuka Bog. Crop Rotation and potentially Vesuva give you two more ways to access this effect.

Part of the reason I wanted to run so much is that these are cards you can just get out of your hand to keep drawing with [card Damia, Sage of Stone]Damia[/card], but still get full value out of later. It's possible, however, that your ability to dig through your deck for specific cards means that you can skimp on graveyard hate more than usual.

Besides that, you have some cantrips to dig for specific answers you really need, a small suite of creature removal and a Nature's Claim. Depending on your metagame, you might want more Naturalize-style effects, but in general my games are heavily based on spells, as opposed to creatures or other permanents.

As strange as it is, this is most of the deck. There's only a handful of other cards, the goal of which is to make sure you can use up your hand every turn cycle and see a new grip of cards. 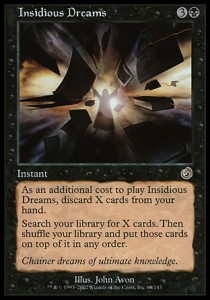 I keep coming back to the idea of being able to use all of your cards every turn. Making sure cards don't get stranded in your hand is very important for this style of deck, and these cards are here to make sure that you can get cards out of your hand and dig for better ones!

The first set of cards here helps to make sure you can get rid of all of the lands in your hand. Of all the cards in your deck, those are the hardest to get rid of since you can only play one per turn. Other cards you can at least cast for very little effect in most cases, but sometimes lands are just impossible to get rid of.

That's yet another reason that ramp is so crucial to this deck. Generally, the deck-thinning that ramp provides is a minimal advantage at best, but when you're drawing between five and twenty cards each turn, the difference in card quality becomes much more noticeable.

The second set of cards here are mostly good cards that have an upside if you want to discard a ton of dead cards.

Demonic Collusion is certainly the worst of these, but it's still something I want to try. Insidious Dreams is a card that's just stupidly powerful in this style of deck, but gets commonly overlooked because it's a little obscure.

Psychatog used to be One with Nothing, but the DamiaCast suggested this awesome replacement for it. Psychatog is a great alternate win condition and lets you cycle cards in your hand at will, and is just all around insane for this deck.

The real problem with this deck is that you're all in on Laboratory Maniac to win, which is fine when people don't know what you're doing, but really bad otherwise. That's where Diviner's Wand comes in!

If you can resolve the wand and copy it, then you can start one-shotting people with Damia pretty easily. Alternately, one or two copies of [card Diviners Wand]Diviner's Wand[/card] makes any creature in this deck a gigantic threat, and will close out most games pretty quickly.

Last but not least, we've got to build a manabase for this monstrosity!

This manabase doesn't have too many bells and whistles. There's certainly a case to be made for lands like Ancient Tomb and Hickory Woodlot to make your turn four [card Damia, Sage of Stone]Damia[/card] more consistent, but I prefer untapped lands that don't punish you over a game that lasts more than five or six turns.

Besides that, I really don't think this is a deck that can eke much extra value out of its lands. Perhaps that's an oversight on my part and some manlands or such would be worth including, but making untapped land drops is crucial to consistently ramping out and casting [card Damia, Sage of Stone]Damia[/card]. Because of this, be careful when adding bouncelands or tap lands to the deck.

This is a deck that I have a ton of fun playing. It does an awful lot of nothing, but does it with style!

There's certainly a lot more exploration to be done with a list like this. For example, I want to look into Retrace and Spellshapers as ways to filter your draws and get rid of lands that are stranded in your hand.

Be sure to check out next week, when I'll be taking a look at some of the decks I've gotten in recent emails! I've had some pretty fun discussions with some Commander enthusiasts recently, and I'm excited to share some of the results!

One thought on “Damia, Sage of Mirrors”