Over the past few weeks I've advocated my general rules for competitive deckbuilding in Commander, especially for one-on-one play. Two of those rules, as I've often restated, are:

The reason why I advocate these rules are for the sake of consistency to achieve a specific gameplan, a must in competitive play. There is another strategy to deck building Commander decks I haven't discussed; it's the "I can take whatever you throw at me" approach to deck building. Rather than building for your gameplan, you're building for the gamestate. In the words of "His Holiness Sheldon Of The Immaculate Banlist" you can Embrace The Chaos and try to master it.

Here's a diagram that demonstrates the tension between gameplan and gamestate. It's applicable to any sort of deckbuilding, not just for Commander, but in this format it pushes you to the left of the spectrum, where as you can consciously choose to push to the right. 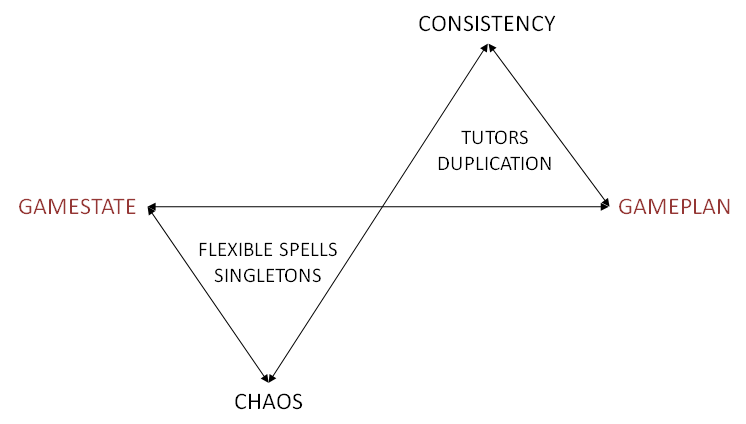 An unmolested gameplan will always win; that's why goldfishing a deck always produces unrealistic results. No plan survives intact first contact with the enemy. The question then becomes how resilient your deck is to disruption, and how capable of disrupting the plans of your opponents.

I advocate a strong resilience through Tutors and Consistency of function through 'duplication' of card effects. This is very good at creating situations that make it difficult for your opponents to stop you achieving your end plans. However another school of thought is that your decks should have as many 'silver bullets' as possible in order to deal with whatever is thrown at you. This is where the philosophy of 'packages' comes from (such asTrinket Mage packages and Stoneforge Mystic packages, etc.). This approach allows you the consistency to tutor up the exact card you need to put a spear through your opponent's gameplan. This school of thought still borrows a great deal from the 'search and destroy' approach to deckbuilding.

There is another approach you can take. You can simply massively increase the options open to you by running a metric tonne of flexible spells, and there are a wide variety of flexible spells in Magic. The ones I'm going to concentrate on in this article are:

MODAL SPELLS
Modal spells begin with "Choose one -" followed by various effect choices, or modes. There have been many modal spells in the history of Magic, from Healing Salve through to the Exarch cycle in New Phyrexia. Here are some of the best.

There are two basic types of charm, monocolored versions and the 3-color charms. Both versions three 'modes' of choice and no ability to select more than one version. Most of the monocolored charms are decidedly lacking in power, but there are some of note.

There are the tricolorws Charms. My favorites are:

Commands
The Command cycle came out of Llorwn block and pushed modal spells to their power limits. Each Command has four modes. The only card everyone remembers all the options to is Cryptic Command (quick, name them!) but the others are all worth remembering as well. As there were only five, I'll talk about each one.

Entwine Cards
Entwine cards are modal, but with the upside of paying the Entwine cost to activate both modes at once. There are 24 modal spells in all, with Tooth and Nail the Commander poster child for the Entwine mechanic. Here are some of the better ones.

Random Modal Chaff
There are also a host of other random modal cards. For example:

SPLIT CARDS
Split cards offer all sorts of flexibility tricks for rules lawyers familiar with how split cards work in regards to the mana costs of the individual 'split' cards. I really suggest reading the MTGSalvation Wiki on Split Card rules to learn more about them.
Here are some of my favorites:

KICKER/MULTIICKER CARDS
Kicker and Multikicker cards are useful as you get a reasonable effect for a reasonable amount of mana, or a great effect for just a little bit more. Here are some of the better ones.

CYCLING CARDS
A card that cycles is never a dead card (alright pedants, if you have no cards left in your library it's a dead card, congratulations!). Its ability to replace itself means you have the flexibility to try your luck top-decking into something useful at all times.
There are a few types of cycling cards. The first are cards the straight cyclers (ie. have 'cycling' printed on them but do nothing more). The second are cards that cycle for specific cards (eg. landcycling, slivercyclers). The third are cards that cycle for effect (ie. have "When you cycle this, do X" on them).
As the first group are relatively straightforward I'm not going to talk about them much. The second group is still relatively small, but there are some interesting cards:

And then there are the cyclers for effect. These are fantastic as the cycling is effectively uncounterable, meaning you gain a card and a pretty devastating effect as well and nothing can be done about it by your opponents. Here are some of the best:

And there you have it. A whole bunch of cards that can add flexibility and, dare I say it, chaos to any deck. Naturally I would advocate a sensible mix of flexibility and consistency, but at the end of the day it's up to you on how you choose to build your deck. Will it be with certainty, consistency and resilience, or with flexibility, variety and adaptability?

Let me know in the comments what you think about consistency versus flexibility for consideration for the deck-tuning article coming next week!