Grand Prix New Jersey is in the books, and thus another page has been written in the epic story that is the Legacy format.

The competition last weekend was nothing short of fierce. Legacy is played throughout the year on the Open Series, but only a few times a year does it feature as a Grand Prix format, which comes complete with coveted Pro Tour invites, alluring grinders from far and wide, and Pro Points, which draws Pros on the hunt for the scarce commodity.

By my count, 14 of the current Magic Top 25 Pros were in attendance, and countless more aspiring hopefuls were in attendance nipping at their heels. Brad Nelson, 23rd in the Pro rankings, did the best of the bunch with his 31st place finish.

Legacy Grand Prix also brings out swaths of the enthusiasts from around the country and even the world.

Aaron Nicastri travelled all the way from Australia to compete, and European Miracles specialist Philipp Shonegger made his way to the Top 8 in impressive fashion. Bob Huang, Legacy Open winner and author of a great Legacy column at ChannelFireball, finished outside the Top 8 with his Jeskai Delver deck, earning a Pro Tour invite for his efforts.

The biggest story from the tournament is the success and sheer dominance of the Star City Games Open grinders.

I already mentioned that Brad, a perennial Open grinder and 12th on the SCG Players’ Championship Leaderboard, finished in 31st at the GP and was the highest finishing Top 25 Pro, but that’s just where the story begins.

Ross Meriam, #3 on the leaderboard, finished in 12th with his signature Elves Combo deck. Longtime grinder Dan Jordan made it all the way to the Top 8 with a stock Izzet Delver deck, proving the deck with the biggest target on its head was still clearly capable of success.

Tom Ross, the most dominant force on the SCG circuit in the last 6 months and #4 on the board, maneuvered himself all the way to the finals. His mastery of the Infect deck, the Legacy format, and Magic in general, is awe-inspiring. While the finals loss leaves Tom with something to be desired, it was a ridiculous performance by all metrics. I expect that Tom’s second place finish has added hot-burning flame to Tom’s competitive fire and will spur a much greater success in the future, likely on the back of his well-earned Pro Tour invite.

Brian Braun-Duin, the heart and soul of the SCG grinder spirit, and 14th on the SCG leaderboard, took down the Grand Prix, a few days short of 13 months after his Standard win last year in Dallas.

His deck of choice was Jeskai Stoneblade, and based on the dominance of Rudy Briksza at the Columbus Open, it was my favorite archetype of the format and recommendation last week. He demonstrated his Legacy acumen by innovating the archetype into a sleeker, more consistent, and more proactive fighting machine that sliced through the field. Many congrats Brian.

Nothing is held back at these events, and the current volatile world of Treasure Cruise Legacy, competitors put everything they had on the table in fierce no-holds-barred action. Legacy Grand Prix act as drivers of the metagame in their wakes, and the results of GP: NJ will serve as the baseline Legacy metagame going forward.

Let’s take a look at the decklists, what secrets they hold, and their position moving forward.

Brian Braun-Duin made some serious changes to the stock Jeskai Stoneblade deck, making it more aggressive with a set of Young Pyromancer and streamlining the deck to include a Treasure Cruise and Gitaxian Probe.

By borrowing this package from the Izzet Delver deck and incorporating it into his own strategy, he’s supplemented Stoneforge Mystic with Young Pyromancer and doubled his number of high tempo impact and card advantage-generating two-drops capable of taking over a game by themselves. Young Pyromancer also gives the deck a more linear strategy, and the Treasure Cruise fits right into the deck, pushing out the more expensive and less rawly powerful Dig Through Time.

The deck is more aggressive and faster than Rudy’s Jeskai Stoneblade, but it’s got a higher power-cap and grinding potential than Izzet Delver. It’s a beautiful deck, and after hearing Brian mention his deck in an interview early on day one, I knew it would be the future.

Incorporating Young Pyromancer is so obvious and simple yet was not widely adopted--it will surely be widely adopted at next Legacy tournament. The Jeskai color combination lends itself to a power and deep sideboard suite full of high-impact cards, and it gives the deck useful options for any possible matchup.

This deck is the new normal, my first choice of Legacy archetype, and a deck that will only grow until if and when Treasure Cruise is banned.

Tom Ross has done it again.

Tom has proved that Infect is a very competitive Legacy deck capable of beating anything in the format. It clearly requires mastery-level piloting ability, but to the dedicated, it’s a stone cold killer.

The deck is focused on playing an aggressive game with infect creatures, while pump spells add a combo aspect and blue card draw and permission add a disruptive element. Nothing about this archetype has fundamentally changed with Treasure Cruise, but rather it has adapted to combat the new metagame with subtle card choices. Tom adopted a singleton Treasure Cruise and Become Immense so it too benefits from the efficiency of Delve.

I’d argue that the metagame shift to Treasure Cruise was great for Infect’s position because it moved Wasteland from a fixture of the format and a core part of the Delver archetype’s mana-denial strategy to the sidelines as a utility card. Wasteland was ideal removal for Infect’s Inkmoth Nexus and likely the best single card in the format against Infect, and without that disruption to worry about, Infect runs rampant.

Storm put up a very strong third place finish. I have heard rumblings about strengths of this archetype over the recent weeks, and the rumors have proven founded.

Proponents of the archetype posit that Delver’s move away from a disruptive deck and towards a linear, aggressive deck have made it vulnerable to Storm’s strategy. With immense redundancy and card selection, Storm offers great consistency, and it’s quite robust against countermagic and discard. It boasts a great matchup against most archetypes game one, and it will typically beat anyone without loads of disruption, like Jeskai Stoneblade and other combo decks, like Elves and Sneak and Show.

Storm has also been relatively quiet and unhyped lately, which means the metagame is relatively lacking in dedicated Storm hate, with most sideboard packages beginning and ending with two Flusterstorm. Miracles and its Counterbalance is still a problem, but sideboarded Abrupt Decay cures most ills, and, overall, the archetype is definitely a contender for anyone willing to master its intricacies.

Miracles put two copies in the Top 8 and proved it's still a Legacy powerhouse.

Many expected the archetype to adopt Dig Through Time and Braverman played a copy, but Philip Shonegger forgoed Delve altogether. These Miracles experts tuned their decklists to the metagame and crushed the field.

The two decks don’t reveal any real new technology. Rather, each one represents a specific take on the archetype.

Both found great success, and both decks represent great options going forward. I’d keep my eyes posted on the internet for a report from Shonegger, possibly on SCG, as he seems to always write when he does well and surely has much insight to share.

Dan Jordan hit the Top 8 with a Delver deck as stock as they come--an impressive finish from the archetype that proves it’s very much a threat in any metagame, even one so heavily slanted to beat it as GP: NJ.

A deck so consistent, efficient, and powerful will continue to thrive in its stock form, though the deck and sideboard will especially continue to evolve.

This deck combines elements of big-mana ramp and a prison strategy to attack the format from two different angles.

The prison aspect, highlighted by sets of Chalice of the Void and Trinisphere, attacks the format from the bottom up. The mana ramp, which includes the package of Cloudpost, Glimmerpost, and Vesuva, enable a huge top-end that goes over the top of the format, including a Kuldotha Forgemaster-powered utility toolbox. Lodestone Golem bridges together both sides and serves as the go-to threat for closing out the game.

This deck is not to be taken lightly. And while it’s relatively high-variance, the power level is off the charts and its metagame positioning is suburb. This is the stock MUD list going forward, and I expect it has already drawn many converts.

Rounding out the Top 8 was a control deck utilizing Standstill, a throwback to a classic Legacy archetype that was quite popular in the years after the format’s conception.

By eschewing a full four Treasure Cruise and just playing one and a Dig Through Time, the graveyard is opened up to Snapcaster Mage, which this deck heavily leans on. It's comparable to Delver and Stoneblade decks, but rather than aggressive cards, it plays an expanded disruption suite that includes Spell Snare and Stifle.

The most eye-catching card is Sudden Shock, which has regained a lot of value in a format centered around permission-filled blue creature decks. 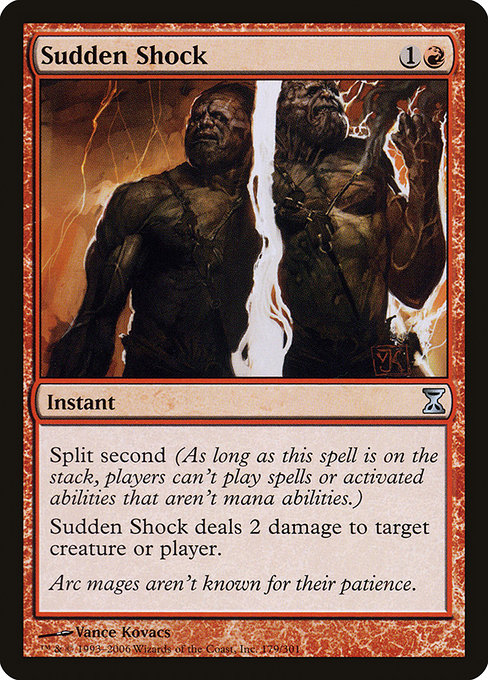 It’s a particularly good answer to Monastery Swiftspear, which can’t grow in response, and to Young Pyromancer, which cannot create any tokens in response. It’s also a sure-fire way to kill Stoneforge Mystic, a.k.a John Tucker.

Also removing Delver of Secrets // Insectile Aberration, Deathrite Shaman, and Elf combo pieces, Sudden Shock’s inclusion was a move of indisputable genius by Lam Phan or whoever he got the idea from. Suddden Shock is a delightfully refreshing flashback to another time and place, and an excellent option going forward, including in the sideboards of other archetypes.

Outside of the Top 8 were more decks of note, including:

There were some surprises over the course of the tournament, but the ultimate result of the Grand Prix New Jersey was far from unexpected.

The tournament was dominated by Treasure Cruise strategies, while Dig Through Time and even Become Immense also reached Ttop 8 play.

The metagame has refocused itself around Treasure Cruise and the decks it enables, but Legacy is still a world with many familiar archetypes.

It’s possible Treasure Cruise will be banned when the next set is released, though many suspect it will not. Until then, I’d cruise on.