Okay, this article might seem a bit counterintuitive at first...similar to my previous article. But the reason is because it depends on your situation as you’re reading this. I’ve received a lot of positive constructive feedback on my first two articles, and I really appreciate it. But the only way I’m going to really appreciate it is by putting the feedback to work for us.

One of the most common misunderstandings that I’ve had discussions around is that this series is focused on cards that tournament players should consider picking up for play before they spike. The focus of this series was detailed here. I think this is an important factor to keep in mind as you read these articles.

Some others have also asked if I actually follow my own advice – and the answer is yes.

Another suggestion that came up was to take more suggestions. I’ll be doing that towards the end of this article, so be sure to look out for that below. 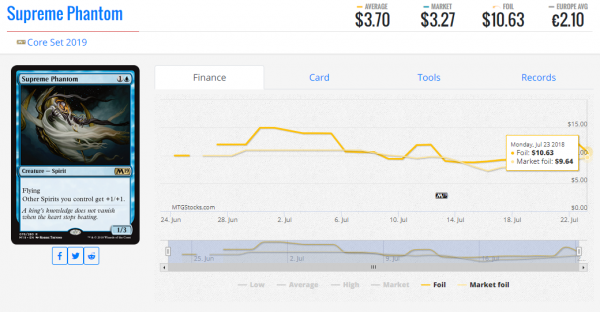 I bought a playset of foil Supreme Phantom on July 17 shortly after Zan Syed and his teammates placed 4th at SCG Worcester on July 15. Results from team tournaments are usually a bit risky to go off of because they’re more skewed than individual results. I didn’t buy these as I watched Zan play or suggest them in my second article for this reason. But since more data has come in, I’m suggesting this card as a pickup.

Not only does this see play as a four-of in Zan’s list. But a friend of mine just lost in the semifinals of a PPTQ this past Sunday with Esper Spirits, which I think could potentially be a contender against Bant Spirits as the best Spirits deck to play in Modern. You can find his list below. And you can read his in-depth tournament report here.

Bant Spirits is also starting to pick up online as well. BAYESTA_93 placed third in July 22’s Modern Challenge on Magic Online. BAYESTA_93’s list differed from Zan’s list by one card. BAYESTA_93 played one Settle the Wreckage over the second Worship in the sideboard.

Another reason to try picking this card up on the cheap now is that this could show up as a four-of in Legacy Spirits since it’s blue. Take a look at the following list submitted to MTG Goldfish by Rayyn. This is a bit of a stretch, but it’s still something to consider, and I’d rather have at least my playset now over later to play with in Modern and Legacy.

There are just a few on Card Kingdom. And they went up from $8.99 to $10.99 since I bought them on July 17. And the supply is starting to dry up on TCGplayer for both pack foils and prerelease foils.

If you want to play with them, you’d better get them soon, since core sets like M19 tend not to get opened as much as other sets. And if foils are too rich for your blood, you might want to consider just getting regular copies, even if the upside is likely not as high. 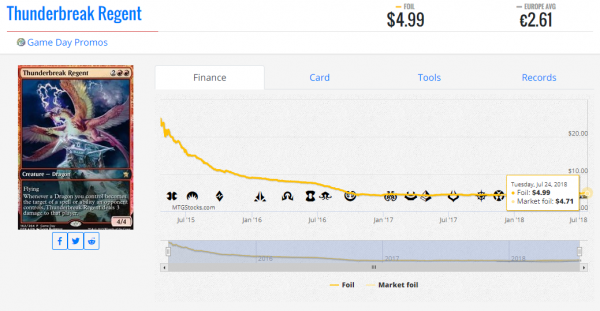 Alright, let’s get to the "counterintuitive" part. Skred Dragons just won the SCG Philadelphia Classic. But I have no idea how, because I have no idea how this deck consistently beats UW(x) Control decks. But if you want to play this deck, I would pick up the Game Day promo of Thunderbreak Regent, because it will never be printed again and the deck runs four. Casual players love dragons as well, and this could also be easily reprinted in Standard.

Pretty much the same arguments used for Thunderbreak Regent go for this card as well. Yes, this will be rotating out of Standard in the fall. But the promo version will hold value over time. As mentioned in my first article, promos are the next buyout targets according to MTG finance guru Chas Andres.

Okay, this is where things take a slight twist. If you have these promos and don’t plan on playing with them in Modern or in Standard again, I would sell into any additional hype on Skred Dragons if any happens to develop. If this deck continues to do well, I don’t see it lasting for a very long time; so you might as well lock in the value now.

Again, the same goes for Glorybringer.

As I mentioned above, a friend suggested that I take a question or two from the community to increase readership engagement, which is a great idea. If you've been wondering about a particular card, drop it in the comments and we can discuss the card as a community.

For example, I have a foil M11 Leyline of Sanctity. Is this a hold or fold? 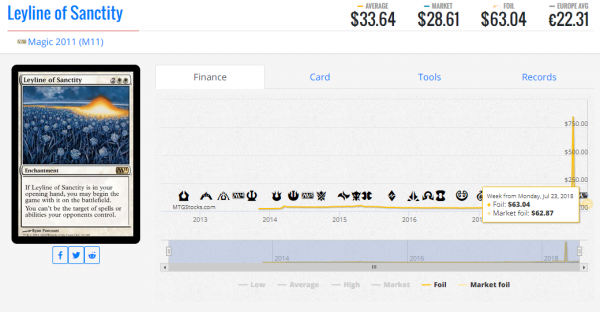 Surely most of us have at least one card like this that we’re contemplating. And all of us would love to hear about it and discuss possible actions. So share your cards in the comments below and let’s get to work on dissecting them.