Thank you to everyone for all the feedback on my first article. I hope this one is even better. I originally drafted this article on Thursday, July 12 and wanted to get this out to you before the weekend. Now we’ve seen two copies of Sneak & Show in the top of SCG Worcester. But there’s still an opportunity before the market starts to shift hard. So here we go. 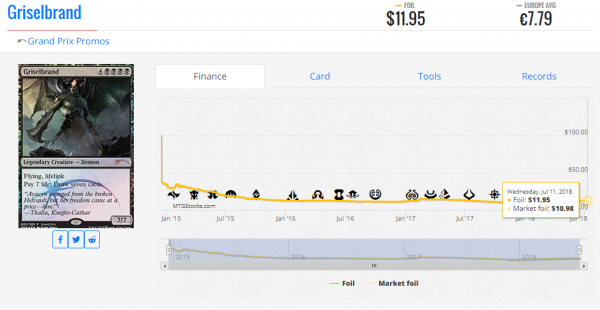 Brian DeMars talked about Griselbrand here, and I agree with him. With Deathrite Shaman gone from Legacy, abusing the graveyard has gotten stronger. This sees play as a three- or four-of in Reanimator and Sneak & Show. If you watched any of the coverage this weekend, you know that Bob Huang didn’t lose a match, or even come close, with the following list:

Andrea Mengucci's Sneak & Show was also listed first on his Legacy winners after the banning. He references Grand Prix winner Edgar Magalhaes when talking about the metagame shift. 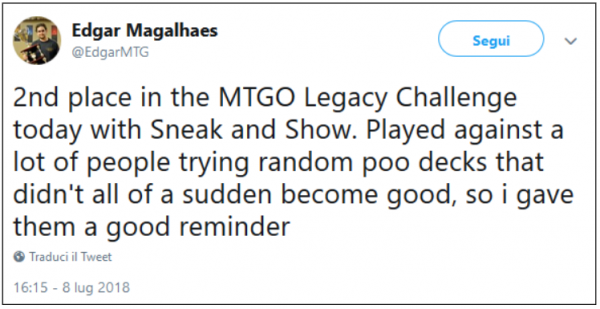 1 Abrade
2 Blood Moon
1 Boseiju, Who Shelters All
2 Defense Grid
1 Jace, the Mind Sculptor
4 Leyline of the Void
2 Pyroclasm
2 Through the Breach

And guess what he lost to? Yep, another Sneak & Show deck run by pokerswizard who’s also no slouch on Magic Online. Here’s his winning list:

But here’s the kicker: Griselbrand also sees play as a four-of in Grishoalbrand in Modern. I didn’t have any, so I bought a playset from TCGplayer at $11 each on Tuesday, July 10. If you don’t have them and want to play them, you should probably do the same before Pro Tour 25th Anniversary on August 3-5. 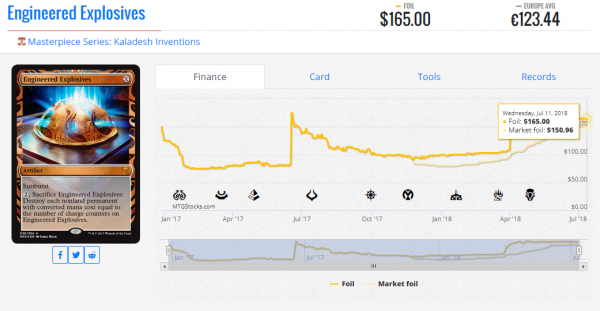 This is a tougher pill to swallow, but hear me out. Engineered Explosives showed up as a three-of in the latest iteration of Modern’s Krark-Clan Ironworks combo deck in the top 8 of Grand Prix Barcelona on July 1. This is the rarest version of the card, and there won’t be a rarer one printed. So this has nowhere to go but up. 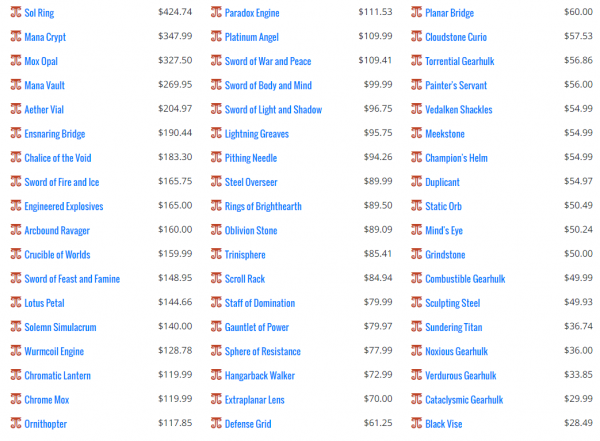 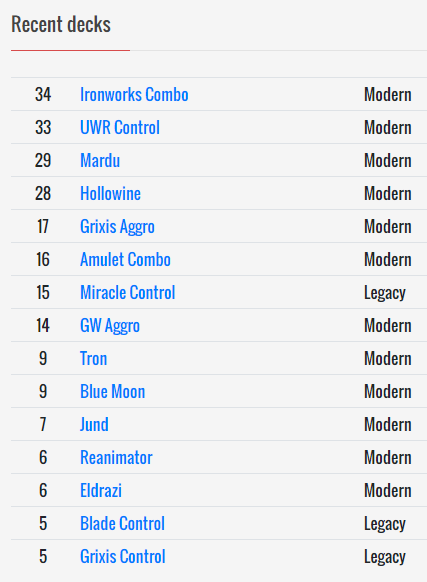 And this shows you how popular the card is in Modern and Legacy. Here’s Luke Purcell’s sixth-place decklist from SCG Worcester.

If you need these and have the extra cash to splurge, I would get the Kaladesh Inventions version now. There are a few copies on TCGplayer and Channel Fireball. 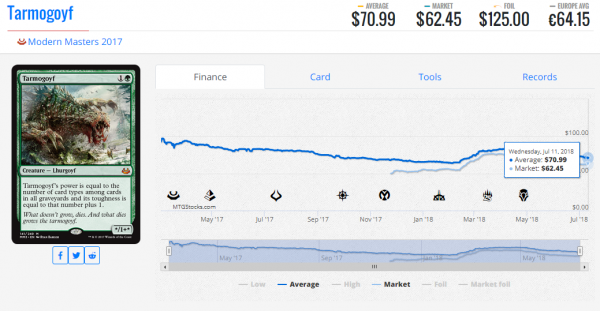 Jund isn’t too good in Modern right now, but Tarmogoyf got better with the banning of Deathrite Shaman in Legacy. So this is the time to pick up Tarmogoyfs if you need them. It’s the summer lull; a perfect time to pick up what you need on the cheap. Tarmogoyf will pretty much always be a staple in Jund. And it’s only a matter of time before the deck becomes good again in Modern. As more proof, after drafting this article before the weekend, there were two copies of Temur Delver alongside those two copies and Sneak & Show at SCG Worcester. 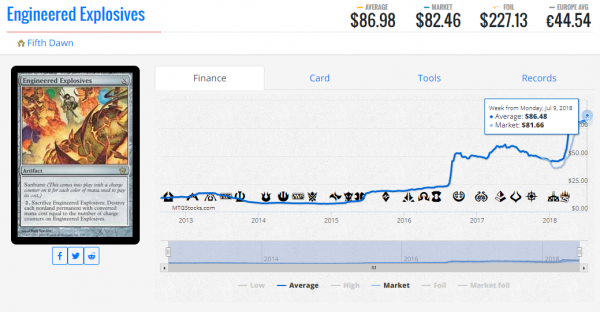 Just like the Scars of Mirrodin fastlands mentioned in the previous article, this could easily get printed in Standard or the next Masters set. One thing you could do is work towards getting Kaladesh Inventions by using your other versions to help trade up. That’s what I plan to do this summer. 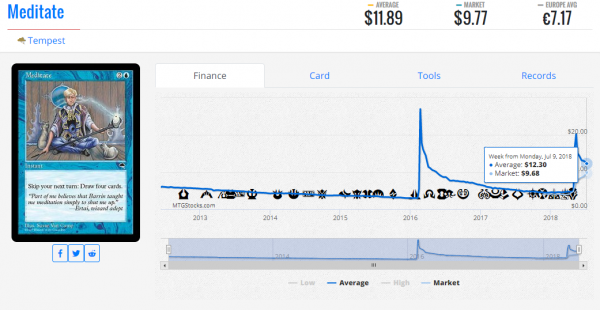 It’s a blue card that draws four cards for three mana. Wow. And it’s on the Reserved List. Plus, it sometimes pops up in High Tide lists in Legacy on rare occasions. For example, take a look at this list from Iwouldliketorespond on Magic Online. If you don’t know who that is, you can see some of this person’s Magic Online finishes here.

I’m sitting on eight copies that I bought and traded for at about $5 each within the past year. So you can see that I put my money where my mouth is. 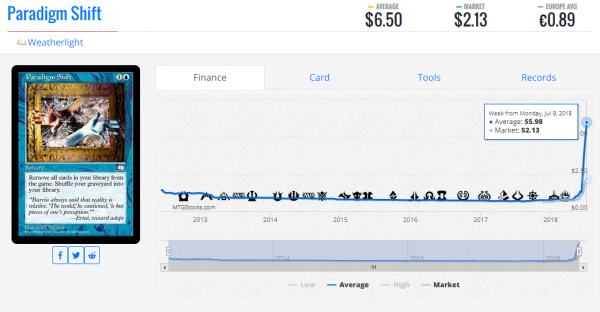 Here’s another blue card that’s on the Reserved List that has a uniquely powerful effect. It kind of already spiked a bit, but it’s still pretty cheap. I didn’t have any, so I bought a moderately played set from TCG Player at $2.75 each on June 21 and put them in a box when I got them. It looks like Card Kingdom still has some at good prices if you want them.

And one last thing before I go: if you were on the fence about Thorn Lieutenant from my previous article, here’s Andrew Jessup’s eighth-place list from SCG Worcester. 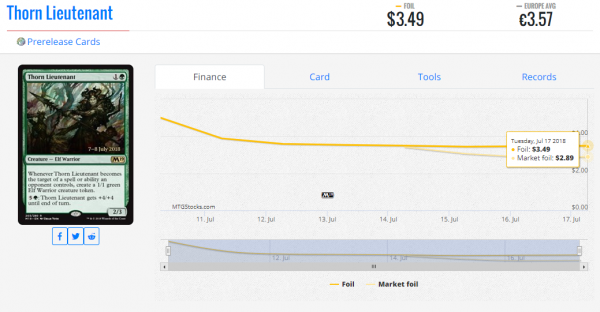 Let me know what you think in the comments below. Agree? Disagree? Why? You can also connect with me on Twitter at @edwardeng. I’m also open to suggestions on how to make this series more valuable. Hit me up. Thanks.