A couple of weeks ago I wrote a Rafiq deck-tuning article. It seemed to be a success, so I put out the clarion call for other QS readers (and twitter followers) to submit their decks for tuning. A number of you did so and that’s much appreciated. As I try to do a thorough job, I won’t be able to publish deck tuning articles for them all at once, but over the next few weeks I’ll work my way through them.

This week I have a deck submitted by @alawley, a man with a very spiffy twitter icon (if I do say so myself). Alawley’s deck uses Korlash, Heir to Blackblade as its commander, and is designed for "one versus many" play. Alawley's initial decklist:

That’s a lot of cards.

My first step is always to sort the cards into similar functionalities. I like to use Magic Online for this as I’m a visual person and find sorting it this way easiest, and my articles tend to be about Magic Online-based decks. Here’s a screenshot of how I do this: 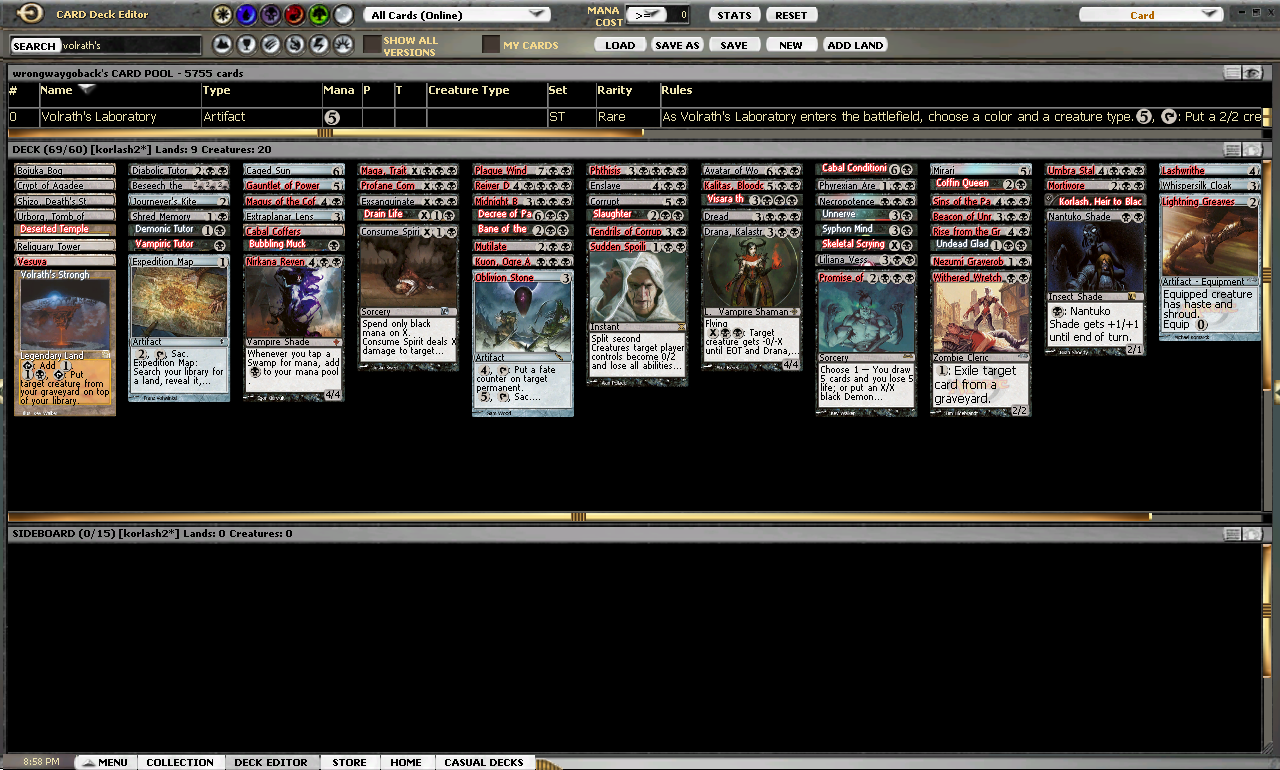 Going back to basics, I have to ask myself whether my rules for powerful and consistent Commander deckbuilding are being followed:

Korlash, Heir to Blackblade is a guy who likes to bash face, but right now this is not a deck that likes to bash face. This is much more of a control build, based around killing off everything that moves until there’s enough mana to resolve a giant Drain Life effect. In fact, based on the sheer quantity of Cabal Coffers and Drain Life effects in the deck I’d say Maga, Traitor to Mortals is the General most befitting running the show.

The question is now what the better change is to make: drop Korlash for Maga, or rebuild the deck around Korlash? In this case, with a deck as reasonably well tuned as this, I think replacing Korlash with Maga is the way to go as it requires far less changes to the deck. The gameplan of the deck resolving a massive x-spell that kills as many opponents as possible at once. This means the role the deck will be playing is one of control. We want ways to make sure no-one is getting our life total to low before we pull the trigger and nuke everyone. Neither, however, do we want to attract too much attention doing so.

The next step is to pull into the sideboard the cards I believe aren’t working to the plan or serving the commander, as shown below. This is just a starting list of changes. I’ve also extracted cards there are better options for. 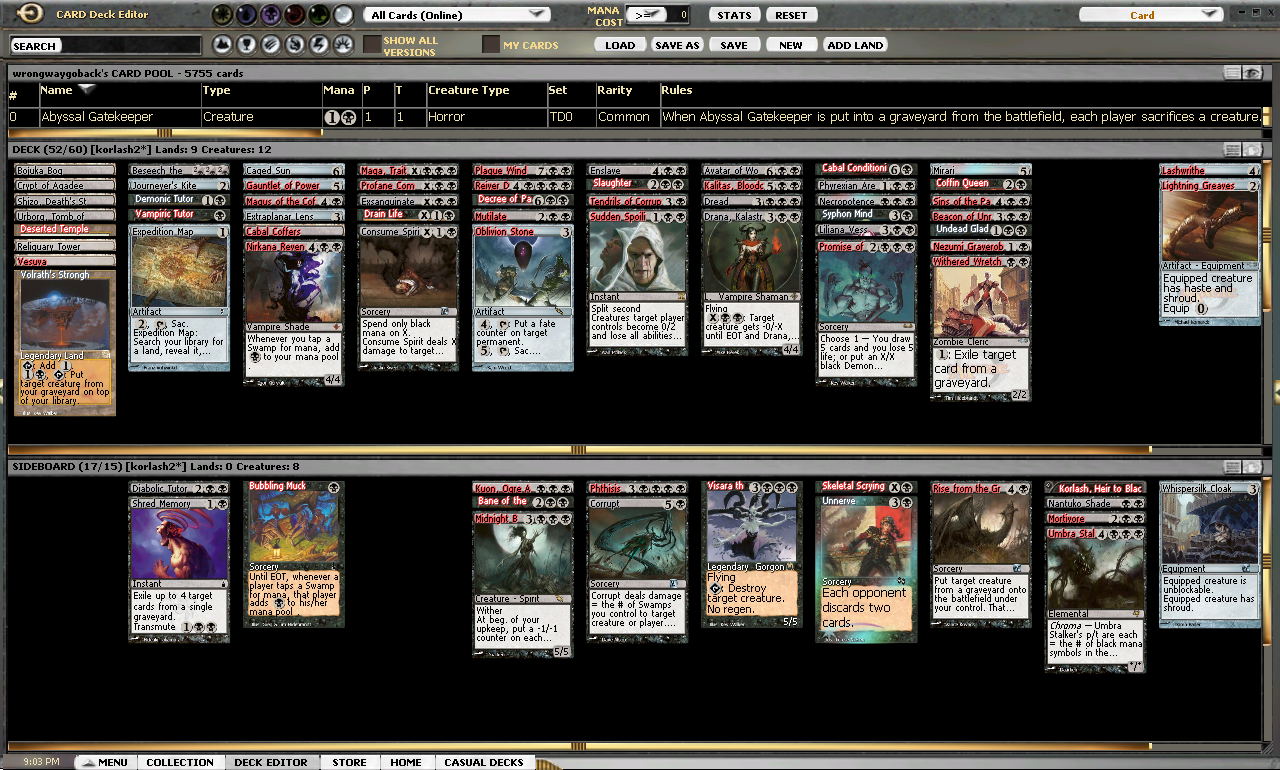 While looking for weak cards, I also try to note any weaknesses in the deck.

With that review out of the way, the next task is to add potential cards to the mix. Because I have an encyclopedic knowledge of every Magic card ever printed, this is extremely easy to do. Obviously that’s a lie, and I spend a fair amount of time in Magic Online searches and using Magiccards.info to find cards that may help out my sinister plans.

Having removed the cards I want to take out, I drop my options into the sideboard. 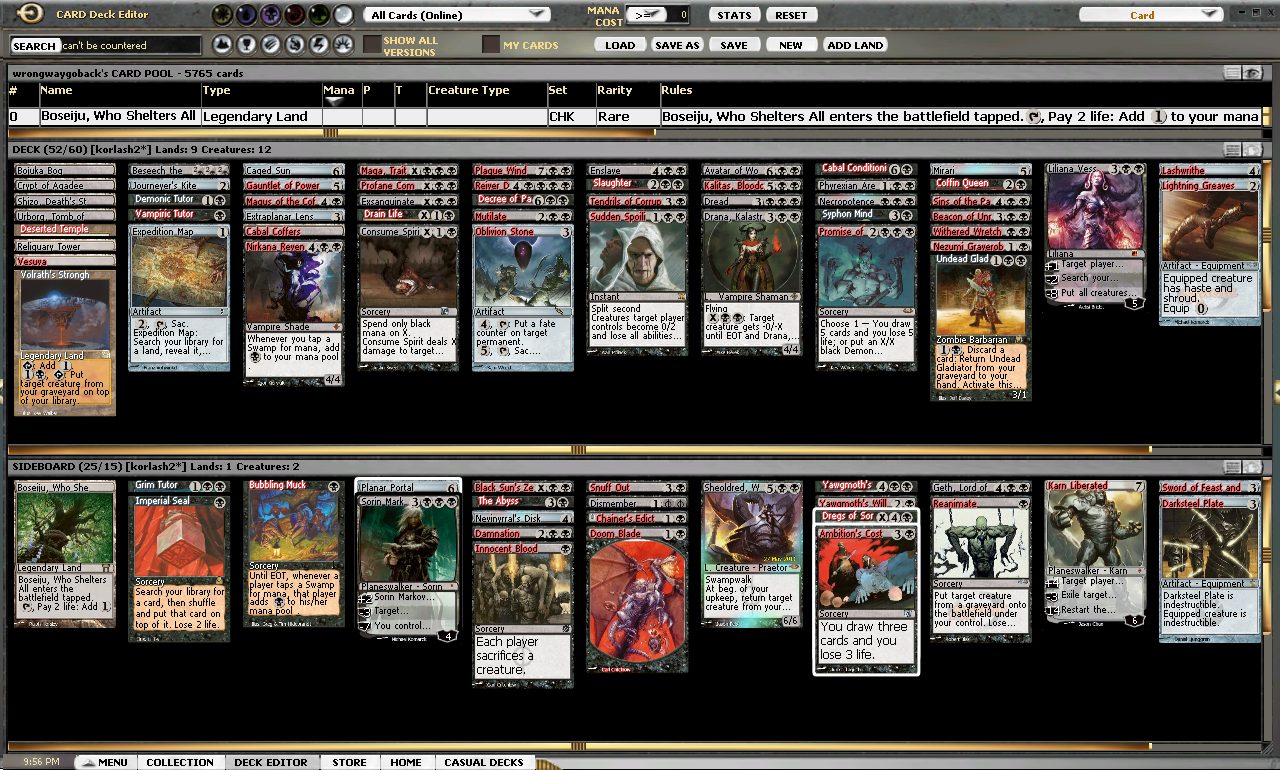 Here are my thoughts:

However, this process leaves the deck with too many cards. The deck is running 40 lands, which is probably three too many, although the deck does love to make the land drops. With Boseiju, Who Shelters All, that’s still only a gain of a single card slot for the rest of the cards.

It's now time to see what sticks out like a sore thumb in the deck.

That leaves us with the following deck: 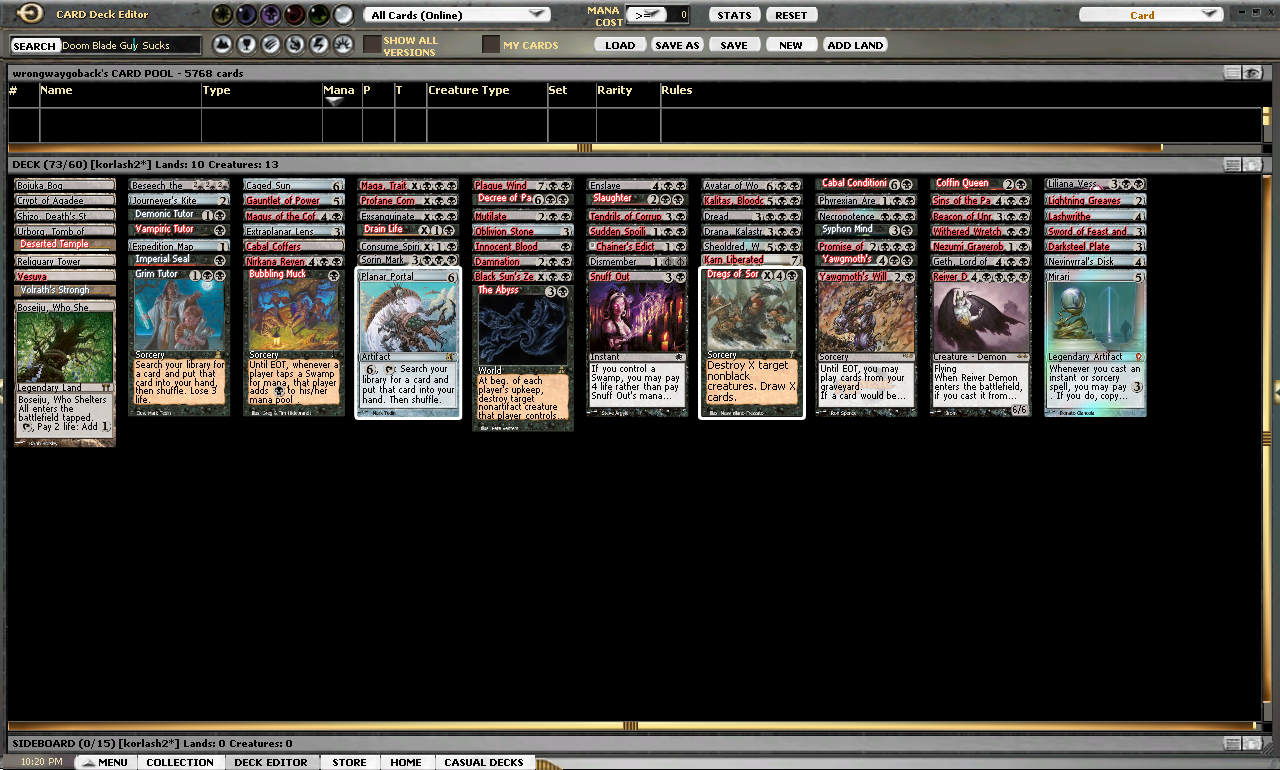 1 Sins of the Past
1 Nezumi Graverobber // Nighteyes the Desecrator
1 Beacon of Unrest
1 Coffin Queen
1 Withered Wretch
1 Reiver Demon
1 Geth, Lord of the Vault

Ok, I’ll admit it’s a stretch to call the Reiver Demon graveyard interaction. The deck is slower than the usual 1-on-1 decklists I talk about, but that’s generally ok in a one versus many environment, where the tallest poppy is likely to have its head cut off. This deck is out to win the long game and the higher mana curve – never truly corrected – is representative of that. At least this deck is capable of producing some truly incredible mana counts.

With any deck there are improvements to be made, pet cards to be included, combos to be discussed. If you’re willing to help, please chat about this deck and make suggestions for ALawley in the comments below!

Watching Sam Stoddard at the SCG Legacy Event the other week, confidently reanimating Jin-Gitaxias, Core Augur, made it clear to me how brutal that card is regardless of where it's played. I immediately had the urge to put together a decklist, hereby tentatively titled Death and Gitaxias.

The deck runs Dralnu, Lich Lord as the General, partly to access U/B, and partly because he can is amazingly abusable with all the instants and sorceries in the deck. But he’s a sensitive old soul, Dralnu, and as a result you have to play him pretty intelligently to get maximum value. Here’s the list, with more thoughts below:

It’s pretty clear what the deck’s Plan A is:

But it has a number of backup plans as well, including:

This is not a “draw and see what happens” style of deck that more generally befits the casual Commander format. This is the type of deck that rewards players that understand the intricate actions and paths you can take to victory. Some examples:

I haven’t had a chance to try this deck yet so it’s not tuned, but I thought I’d throw the deck list about for public consumption while I try to get the last of the cards I need (basically Jin-Gitaxias, Core Augur himself). As soon as I manage to get it together I’ll try wheeling it out and see how it goes. If you get a chance, please sleeve it up and let me know how it goes!

7 thoughts on “Deck Tune: The Writhing Of Korlash”