I held a brief, unscientific twitter poll the other day to get a quick consensus on what the most broken commanders are. Here are the results. 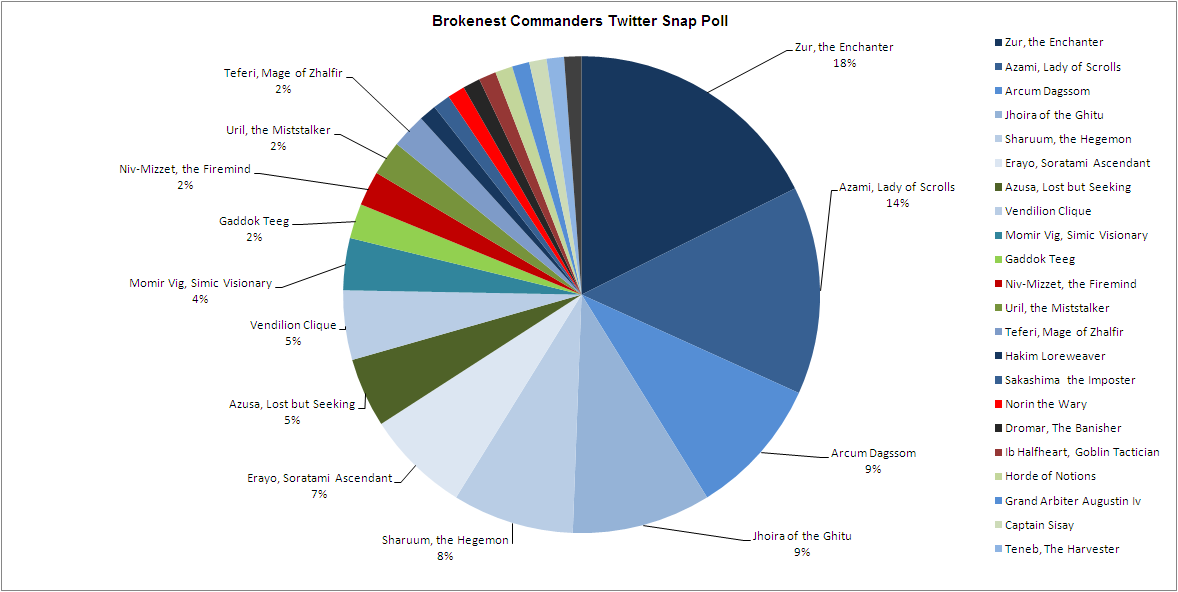 They roughly align with my understanding of the metagame. There's a case to be made that Glissa, the Traitor belongs on the list, but the current build is really a finely tuned Necrotic Ooze/Hermit Druid-combo deck that could easily be seen in Teneb, the Harvester or any other G/B/u/r/w build. The same for Vendilion Clique, who provides an unprecedented level of hand disruption, but otherwise are basically a mono-blue-control deck.

Here are the current six most broken archetypes in Commander. Note that they all include one particular color (#BanIslands).

Zur is widely acknowledged as the most-broken of commanders. He provides constant, consistent tutoring on a unprecedented level compared to other commanders. This allows him to be a true "build around me" toolbox commander, able to grab such enchantment greatest hits as Necropotence, Stasis, Standstill, Land Tax, and Oblivion Ring, all with the ability to recur these through Replenish and Retether. The deck back ups this up with a strong counter-magic package and a light land-destruction package; with Zur on the table and protected you simply don't need mana any more. The deck also runs Winds of Rath, a context-sensitive Wrath of God that only Zur (or Uril, the Miststalker) could love.

The deck aims to protect Zur through several key cards, of which Diplomatic Immunity is the most important. Unfortunately (or fortunately?) the card isn't available on Magic Online yet, so the back up plan of either Vanishing or Flickerform is required. The order of tutor targets usually is as follows:

Stage 2: Necropotence & Solitary Confinement to get the card-advantage machine going and prevent opponents from killing you.

Stage 3: Daybreak Coronet & Empyrial Armour/Steel of the Godhead to kill your opponents, fast.

The deck also has a couple of 'standard' packages built in.

There are only two real weakness of the Zur:

Here's a decklist. The Luminarch Ascension is a nod to multiplayer play, not that the deck really needs it.

Azami, Lady of Scrolls aims to bury opponents in overwhelming card advantage with a side dish of infinite mana. Essentially a Wizard tribal deck, the deck achieves its ends through a number of blue-based combos, including Azami + Mind Over Matter to cycle (for free) through the entire deck to find the exact card needed at the right time. The deck isn't necessarily the fastest in the world, but it certainly has the best long game plan, making it brilliant for multiplayer games. It's just fine 1 on 1 as well, if it has a hand of early disruption and countermagic. The deck plays as follows:

Stage 1: Counter everything while trying to maintain hand size, if possible.
Stage 2: Play out Azami and a couple of other mages under counterspell protection to maintain card advantage and find an infinite mana combo.
Stage 3: Play out the combo, [card Stroke of Genius]Stroke[/card] out opponents or take infinite turns (whatever the build).

The deck includes the following packages:

Azami doesn't have a lot of weakness, largely due to the resilience of the card advantage. However you can push through by:

The most powerful Arcum Dagsson decks are prison decks with a strong denial theme. The key to these types of deck is Winter Orb backed by fast mana effects. Arcum Dagsson makes this possible through his constant tutoring effect, much like Zur, making him a consistent, reliable way of putting together the necessary prison pieces. The deck also likes to abuse Crucible of Worlds to keep opponents off lands while accelerating. The ability to run a Stax shell by abusing Master Transmuter is also a reliable win condition. The decklist plays out as follows:

Stage 1: Drop an artifact creature and Arcum as quickly as possible then tutor up Winter Orb + Icy Manipulator.

Stage 2: Hold the fort with countermagic while destroying opponents' resources with Smokestack/Strip Mine.

Stage 3: Tutor up win condition such as Memnarch or Tezzeret the Seeker and win game.

The deck has the following packages:

Jhoira of the Ghitu

Jhoira of the Ghitu is a bit of a glass cannon. Her power comes in casting massive spells for the low, low price of 2 mana. Jhoira wants to go off very quickly and protect herself from there, but often has no long-term game if Plan A fails. I find that if she hasn't put herself in an unbeatable position by Turn 4 or 5 she's often going to lose. Essentially, the deck tries to suspend the biggest, meanest thing it can quickly - an Eldrazi or a Colossus, for example - and then protect it's position through countermagic (surprise surprise). As a result she's far better in 1v1 play than multiplayer. The deck plays out as follows:

Stage 2: Protect the threats until they land with countermagic and mass permanent destruction, letting Jhoira die in the process if need be.

Stage 3: Smash with threats once they come out of suspension.

The deck runs the following packages:

Here's a decklist (probably not the best Jhoira list that exists, but you get the idea).

1 Jhoira of the Ghitu

Sharuum the Hegemon is both an excellent graveyard recursion engine and part of its own, personal, combo. Esssentially, if you have Sharuum in play and cast Sculpting Steel, or have Sculpting Steel in the 'yard and cast Sharuum, you can set up an infinite recursion loop. The only question is what you want to do with this: with Disciple of the Vault you can drain your opponents, with Intruder Alarm you can infinitely untap your creatures, and with Soul Warden you can gain infinite life.

Like Zur, Sharuum gains a lot from having access most of the best tutors in the format, including Enlightened Tutor, Vampiric Tutor, and Mystical Teachings. This allows the deck to maintain a level of consistency from both the library and the graveyard that other decks find hard to keep up with. However, unlike most of the other decks in the list, it can play a long game with varied approaches: a control game with counterspells and Memnarch, a Prison game with Winter Orb and Icy Manipulator, or a beatdown game with Magister Sphinx and Lightning Greaves ("35 to to you, go!").

The deck plays out as follows:

Stage 1: Mana ramp, play mass/spot removal and draw cards to control the board.

Stage 2: Tutor for key pieces of whatever machine is being assembled, be it prison (Winter Orb), beatdown, disruption (Sundering Titan), etc.

Stage 3: Use said machine to crush while, you guessed it, backing it up with countermagic.

The deck has the following packages, many of which are also in previously described decks:

As a result of these the deck is highly resilient but doesn't 'combo out' in the same way as the other broken decks. Rather its power lies in its ability to adapt to the varying circumstances of any game - especially multiplayer games - and find the necessary pieces to find the win.

1 Jace, The Mindsculptor
1 Tezzeret the Seeker
1 Venser, the Sojourner

A well built Erayo, Soratami Ascendant deck is a sight to behold, capable of going off on T2 consistently. The deck is designed to flip Erayo as quickly as possible, then defend that position until a suitable win condition is found. The deck achieves this by running an large amount of 0 and 1 mana casting cost cards, backed up by a number of casting-cost reducers and mana rampers. This allows the deck to cast and flip Erayo very early on, making a catch-up by opponents nigh on impossible. The deck runs as follows:

Stage 1: Play out hand and flip Erayo to make board progression extremely difficult for opponents

Stage 2: Soft lock with Arcane Laboratory and restock hand to protect position with counterspells and lock opponents out of the game if possible.

The decklist below has a the following 'standard' package:

The weaknesses of Erayo are:

Here's a decklist. The Grand Architect is something I've been trying. This deck has the Teferi/Knowledge Pool win-condition, though Planar Portal/Beacon of Tomorrows or any other end-game lock will do.

So there you go, the six top archetypes in Commander, a competitive metagame defined. With any commander decklist there's infinite improvements, tweaks and changes to be made, so take them as a starting point (especially the mana bases, as they are based on what I own on Magic Online and not what's most competitive). I don't recommend you should play any of these outside of competitive play, but you should at least be aware of them if you see them on the casual tables.

11 thoughts on “The Top 6 Competitive Archetypes in Commander”